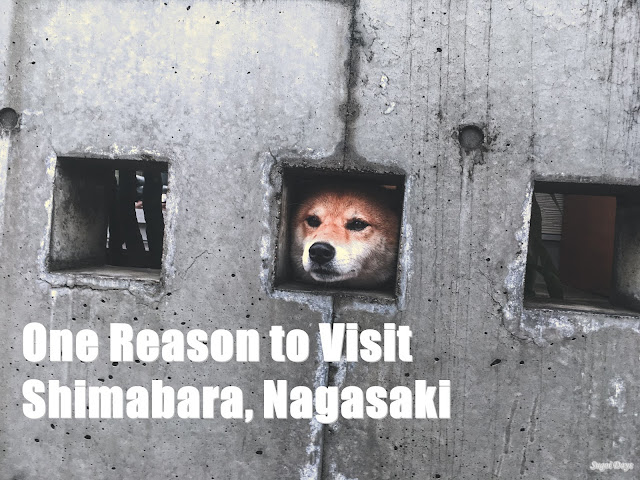 Yes, Shimabara first shot to fame in 2018 when social media picked up on three very peculiar resident dogs that would stick their heads out of the three square holes in the walls, thrilling passersby and travellers alike. The holes in the wall were initially cut in to allow airflow to the garden but upon noticing his dogs' odd behaviour, the owner added more. Now the holes have come their own little viewing window to the outside world. Too cute! 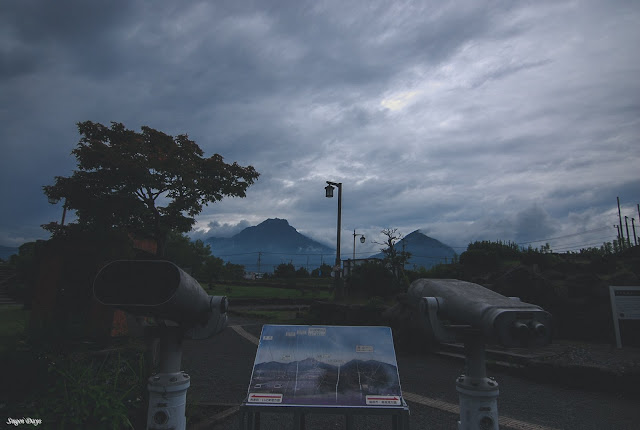 After disembarking the ferry from Kumamoto, I headed into town and quickly found a spot to park my car that wasn't too far from all the destinations that I wanted to visit in Shimabara. It was an odd spot at the crossing of several roads but nevertheless was free and centralised enough. If you can find it at Ote Parking Lot on google map if you are looking for a free place to park your car. 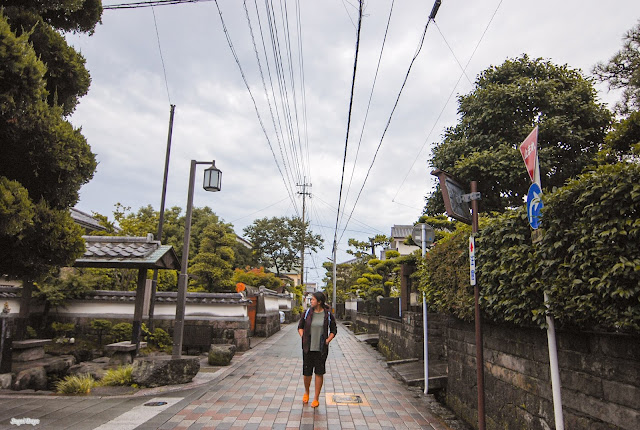 The dogs were of course my first stop but unfortunately there was only one dog that greeted us when we came by. Mind you that these were people's dogs and thus, not trained to listen to strangers so I counted myself fortunate that I even saw one. Of course, it's important to remember also that the area was still a resident neighbourhood and passersby should quiet and respectful. 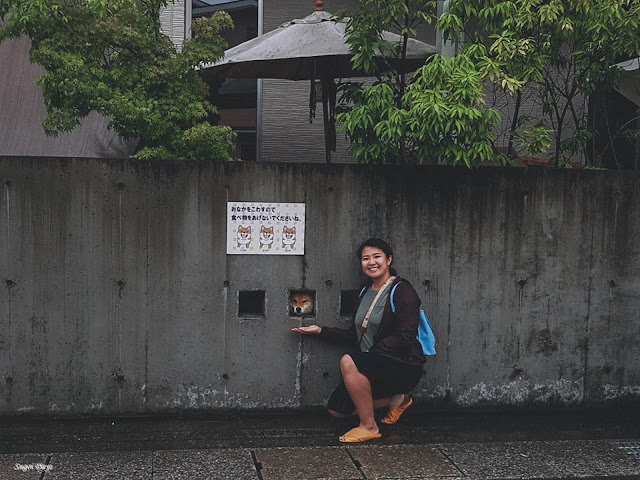 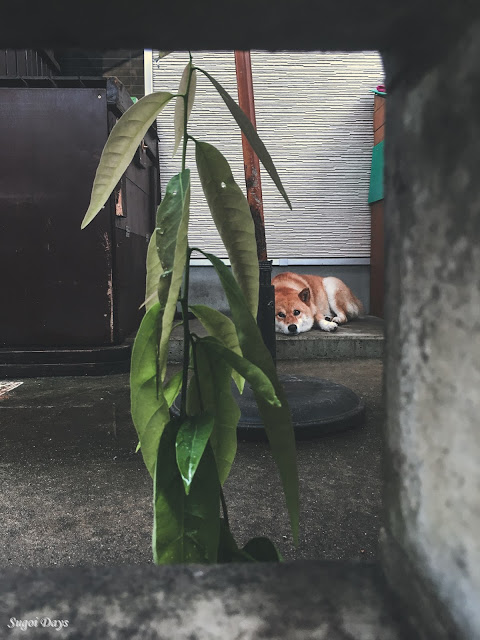 After that, we headed on to Shimabara information center which was at the entrance to the Town of Swimming Carp or the City of Water. For this area and the serene water spilling in from the mountains, Shimabara was deemed one of "Japan's Best 100 Waters". The water was so clear that even carp fishes could live in it. The fishes were an effort by the people of the community and was an amazing thing to see. 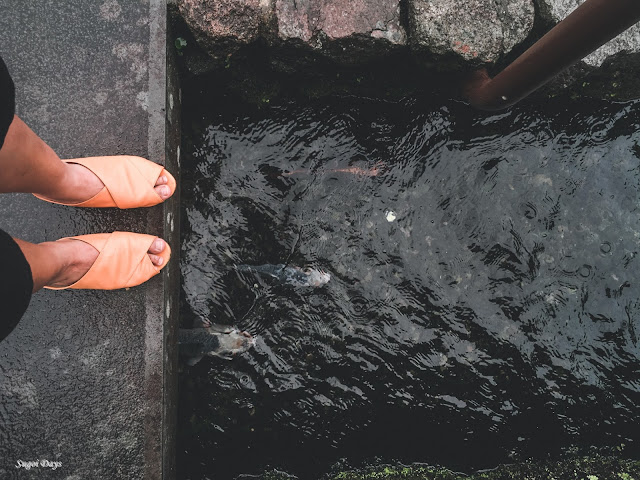 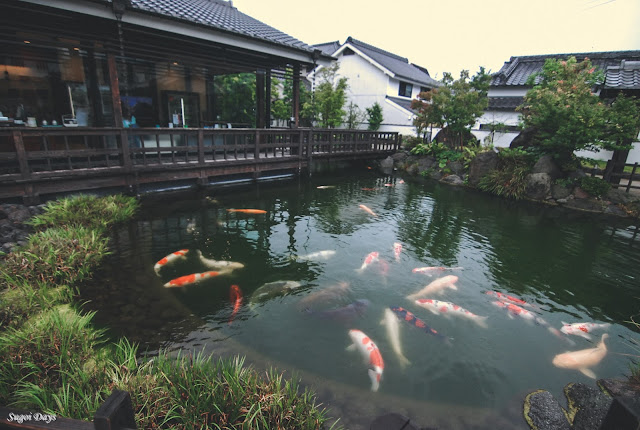 The Shimabara Information Center was also a stunning place to rest and relax with a small cafe and a pond outside housing its own giant carp fishes. While resting there for the next leg of my drive to Nagasaki, I tried their in-house Kanzarashi dessert, gummy-like dough balls put in a special liquid that contains Shimabara's famous clean water and syrup. I would recommend it to be taken with coffee to balance out the sweetness. The information center had its own parking lot but from my understanding (thanks to google translate) you can only park there for two hours. 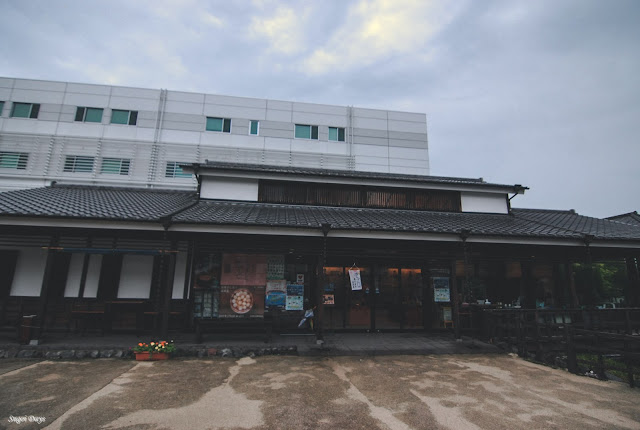 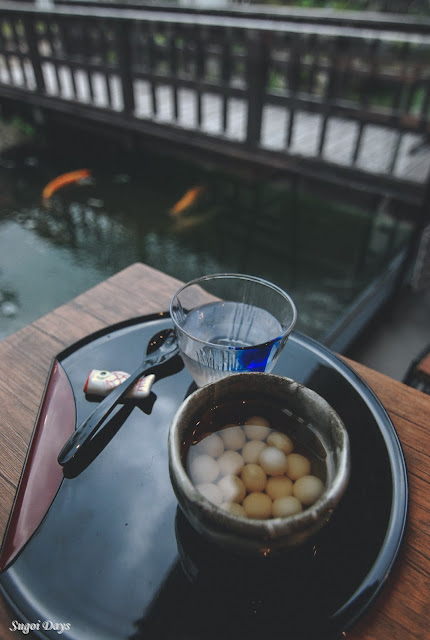 Two hours is actually more than enough to explore that surrounding area as there are several traditional houses and gardens that are open to public. I visited the stunning and utterly serene Shimeiso Spring Water Garden, accessible with a fee of JPY300. As we took a seat in the traditional living room that opens up to the garden overlooking a clear pond with carps swimming in it, we were served with green tea by the house caretaker. There, we spent a good 30 minutes just sipping on hot green tea, snapping photos and talking to the caretaker. 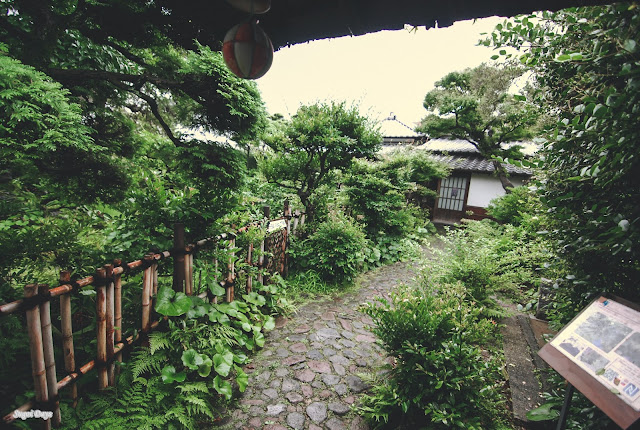 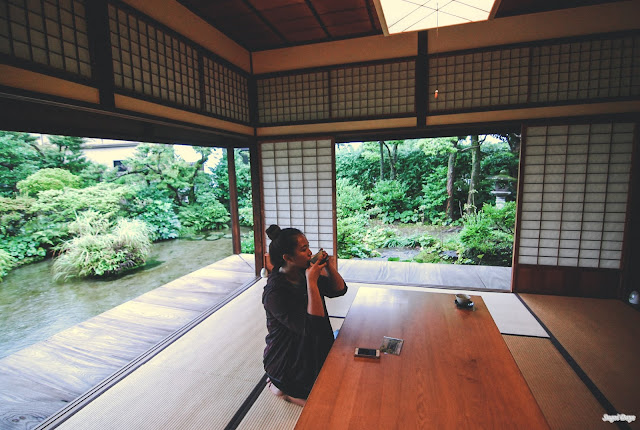 We also stopped by the Samurai Residence, behind the Shimabara Castle. There were several located along a very old-fashioned style street with a pebbled road and a drain with clean spring water running through it. The homes were preserved to maintain the old fashion look and feel of how Samurais lived back in the day and there were even kitchen utensils and furniture to add to the overall experience. 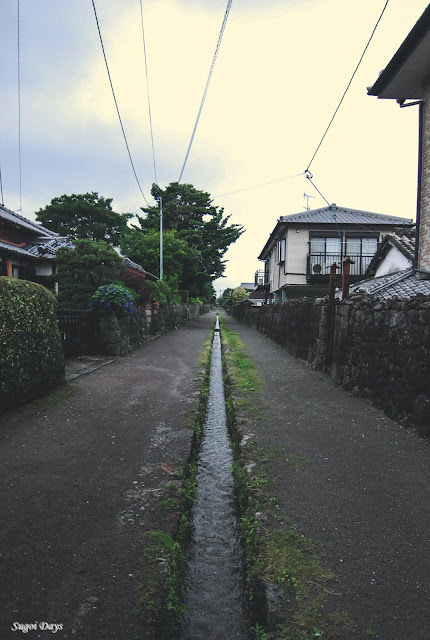 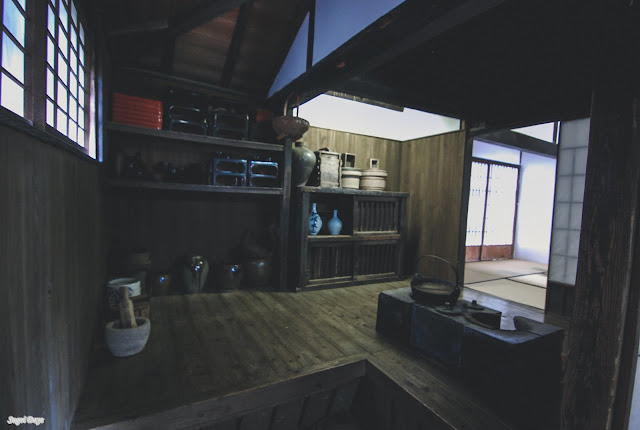 For lunch, we headed to Himematsu-ya. The first outlet with a view of the castle was closed that day but thankfully their second outlet near the Shimabara Information Center was open. We had in fact walked past it but didn't notice it as it was on the second floor of  a shop lot. Nevertheless, there are English menus provided and I opted for yet again, another Shimabara specialty - Guzoni. 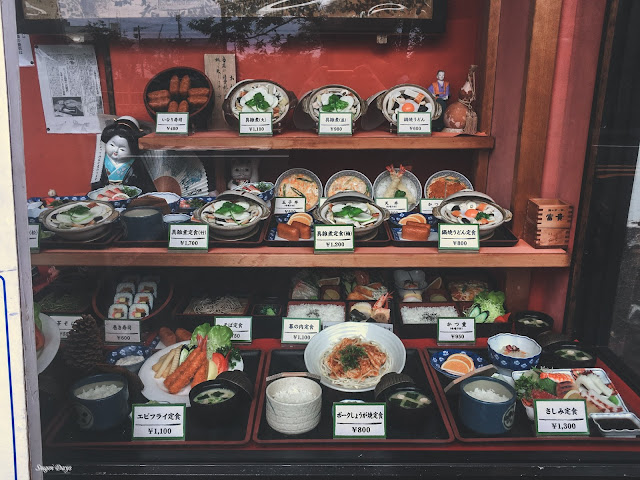 This dish was basically rice cakes in a yummy dashi broth filled with earthy fungi, vegetables, chicken and eel. Guzoni played a vital part in ancient Shimabara as back then, the local farmers would provide the rebels with rice cakes and the ingredients for the soup were sourced from the land and sea. It was said that because of this nutritious dish, the rebellion could sustain themselves for three months. Himematsu-ya is a great place to try out the local dishes, things you can't find anywhere else in Japan and plus it's reasonable too for a wholesome meal. 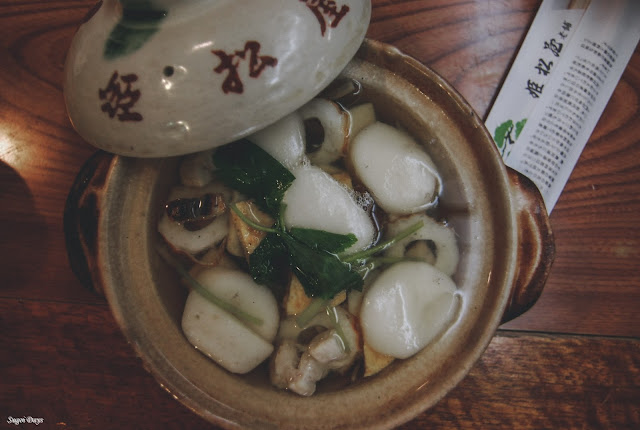 Before we headed on to Nagasaki, we made a detour to an open air museum called the Mizunashi-honjin. Now as the town of Shimabara sits in the shadow of Mount Unzen, an active volcano, it's no surprise to learn that it has suffered from volcanic eruption in the pasts, the most recent being in 1991 that killed 43 people. Mizanashi-honjin offers a grim reminder of how bad it can get as two-storey houses once stood where the museum is now. These houses has been completely covered in lava which had cooled overtime, leaving parts of these homes sticking out of the ground like a sore thumb. A dome was built over the homes to preserve it and I personally feel, that if you have a car and have time, it's worth a visit to truly see the devastating effects of Mother Nature. 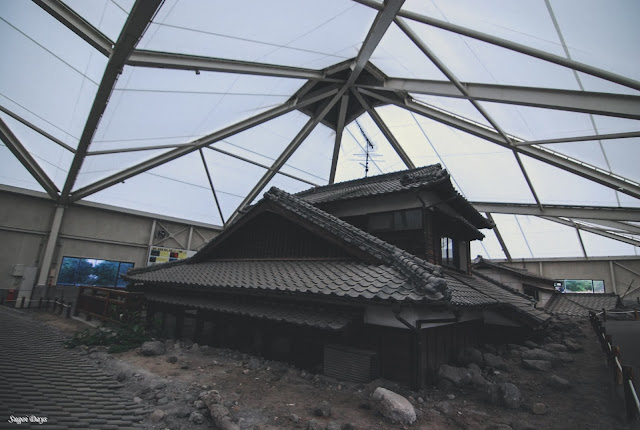 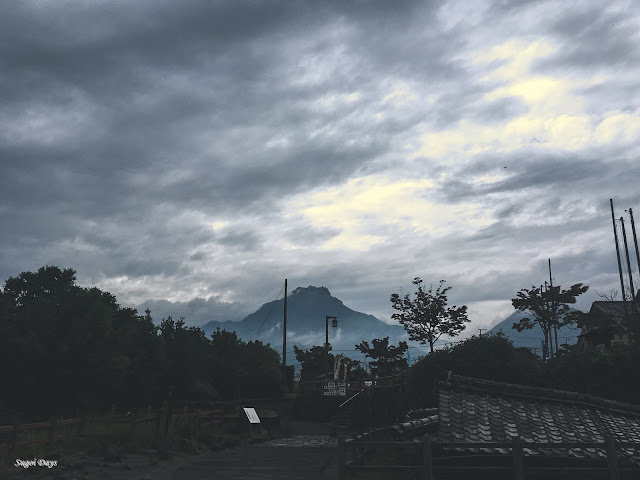 The drive from Shimabara to Nagasaki was easily very scenic as we traversed mountain roads and highways that ran along the coastline in a weather that alternated between rainy and sunny. After 90 minutes to two hours, we finally arrived at our hotel, the Nagasaki Washington Hotel (hotel review here) and checked-in. Dinner was basically BYO as we were too tired to think of what to eat except to run out to one of three konbinis in our vicinity.

Then on a whim at 730pm, I decided ah heck, we have time, let's head up to Mount Inasayama Observation Tower to catch the night city view which is supposedly one of the top three views in Japan. Though the drive up the mountainside was winding, it was surprisingly fast and just a 30 minutes drive from our hotel. And the view... 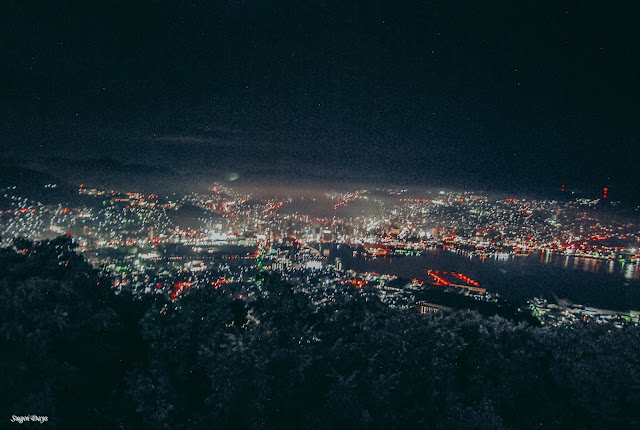 Well, it was worth it for it was stunning. Then as an added bonus, just before closing at 10pm, the old radio towers will come to life with a musical performance for all of Nagasaki to enjoy. There was paid parking available at the observation deck and at that hour, it was best to just drive up and park. Although we did spend a while trying to figure out how to pay for the parking as we were leaving. 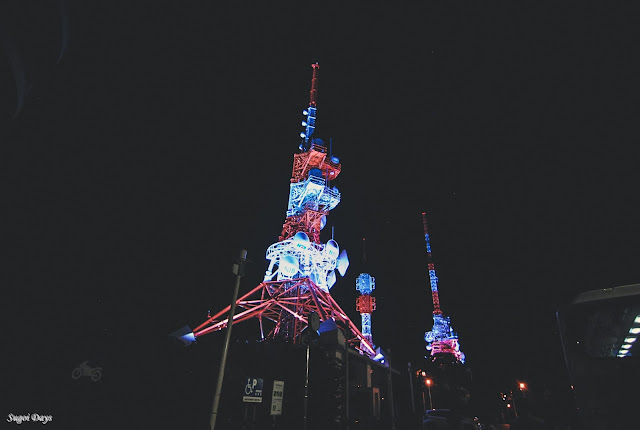 And there you have, my day adventure in Shimabara and ending in Nagasaki. In the next post, we will be visiting the Nagasaki Atomic Bomb Museum.
Posted by Tania at 9:00 AM