I had the grand plan to travel to South Korea in 2020 as part of my New Year's resolution to uncover a country that isn't Japan or Australia. Well, we all know how that turned out. But while I wait patiently for my turn to be vaccinated and for borders between Malaysia and South Korea to reopen, I've decided to comb the internet for places to visit in South Korea that are just off the beaten road from its main cities and the crowd. Because in a post-Covid world, physical distancing and isolation might be the new way of travelling. 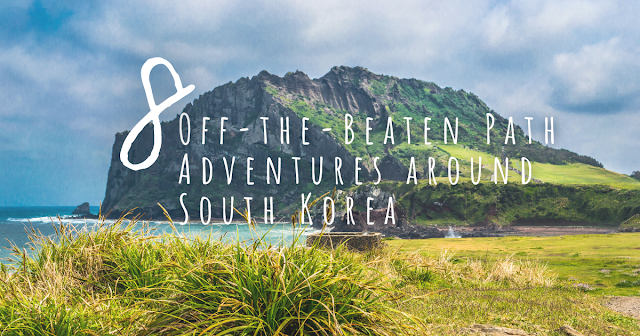 Fortunately, outside of its vibrant cities, South Korea, blessed with four seasons, unique food and culture, has much to offer. So grab your pen and paper (or just save this post) and let's get started.

1. Hwaseong Fortress, Suwon
While a small city, Suwon is perhaps one of the easiest and best spots to go to from Seoul if you want to escape the metropolitan crowd. Its main historical attraction is Hwaseong Fortress, a place so big that that its walls stretch for 5.7km with Paldalsan Mountain in the middle. The fortress was built between 1794 to 1796 to protect the city and in a bid to position Suwon as the country's capital rather than Seoul.

For its historical value, Hwaseong Fortress was declared a UNESCO World Cultural Heritage Site on December 12, 1997. Currently visitors can enjoy free daily performances such as Korean rope walking, farming music, and ancient dances and in the fall, witness the Suwan Hwaseong Cultural Festival. Most people start at the south entrance to the fortress, situated near Paldalmun. It only cost 1,000 won (approx RM3.80) to enter Hwaseong Fortress, after which you can enjoy its carvings and stonework.

Nearest city: Seoul
Getting there: 25 minutes by KTX or 1 hour by subway from Seoul station to Suwon Station.

2. Bukhansan National Park, Seoul
Skip the shopping bags and head to Bukhansan National Park instead. Located within Seoul itself, it is the only national park in the Seoul metropolitan area and is also known as Samgaksan (Triangle Mountain) because of its three peaks: Baegunbong, Insubong and Mangyeongbong. Visitors have descripted it as stepping into a movie set and reliving South Korea's Joseon Dynasty amidst nature once more.

Outdoor lovers and hikers should dedicate a day or two to exploring this beautiful escape. Just remember due to its vicinity to the city, it's one of the most visited parks in the world with about 5 million visitors annually before Covid. The best time to visit is early in the day during its peak season or in the winter as some of its trails might be covered in snow, deterring weekend warriors.