You Need To Try These Local Dishes in Jeju Island, Korea

When in Jeju Island, eat as the locals do. There is no better representation of a local culture than through its food - an element molded by the ingredients of its surroundings and the lifestyle of its people over history and time. 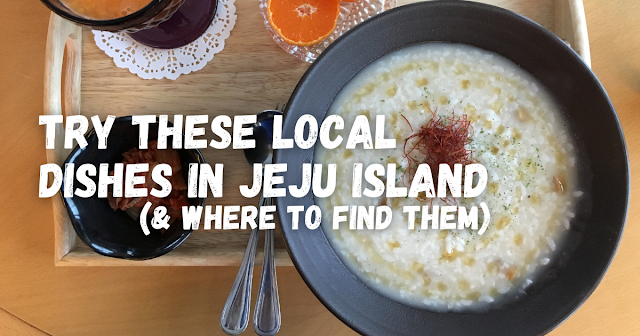 Jeju's local cuisine is one such an example. With its unique location in the south of South Korea and surrounded by sea, Jeju has access to ample seafood. Its inland landscape and climate invites for great farming opportunities as well. So if you're planning a visit to Jeju Island post pandemic (because I am!), you can rest assured that some of the food here will simply be out of this world.
Here's a list of 10 local dishes to try on Jeju. Make sure to bookmark it!
1. Rice porridge Fresh Abalone
When exploring the coastlines of Jeju, it would be impossible to miss out on this signature dish. Every coastal village in Jeju has a Haenyeo House which serves a bowl of porridge made from abalone freshly caught by the haenyeo. 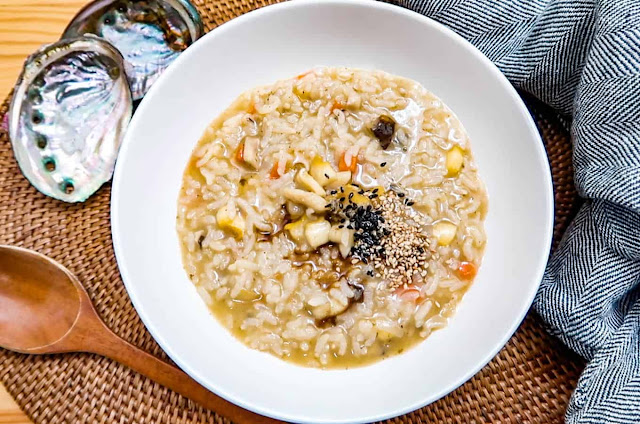 Abalone in Jeju live in strong sea currents which require them to move extensively in the sea and subsequently makes them chewy in texture.  Indeed, there are various cooking methods which all use ground abalone innards and turns the dish yellow. 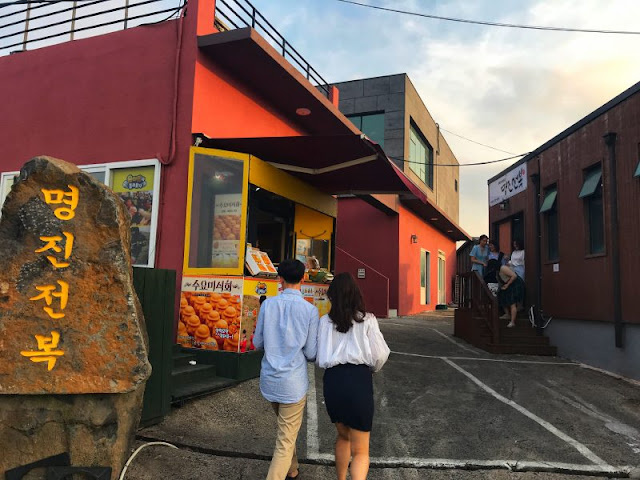 Where to get: Myeongjin Jeonbok (1282 Haemajihaean-ro, Gujwa-eup, Jeju-si, Jeju-do)
2. Heuk Dwaeji | Jeju Black Pork
It's almost heartbreaking to put this on the list because the Jeju black pig is just too cute! But at the same time, they provide some of the most succulent and juicy pork meat ever. As the name indicates, this pig’s skin is covered with black hair. However, when the meat is cut up and cooked, it looks just like any other pork pork except for the tenderness of its meat. A good dipping sauce for heuk-dwaeji is a salty anchovy sauce, which is often cooked in a tin cup on top of the grill. 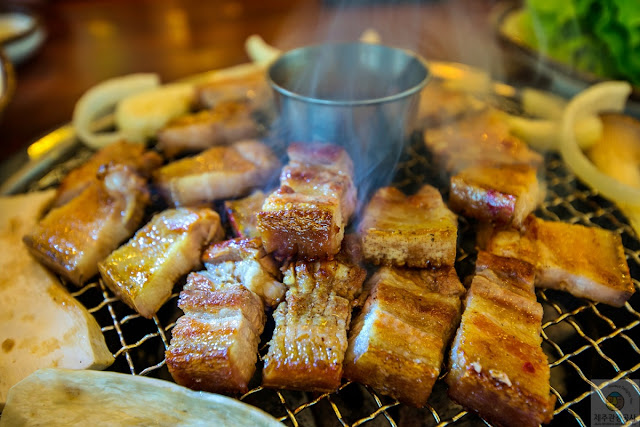 A good black pork restaurant can be easily found all over Jeju but if you're coming from Dongmun Market, then check out Heuk-dwaeji street. True to its name, the street is lined with lots of restaurant serving BBQ black pork. 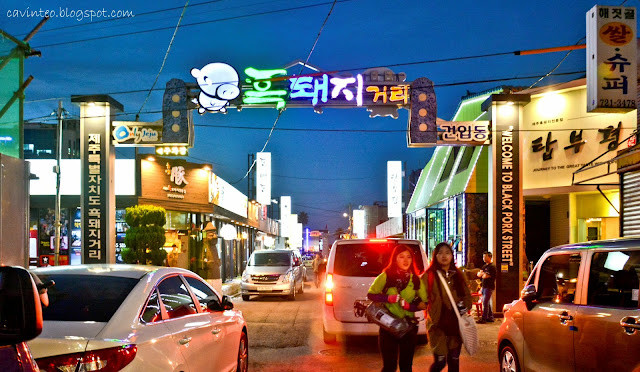 3. Haemultang | Seafood Hot Pot Stew
Behold the seafood version of rojak. Haemultang, 해물탕, is a dish that puts all sorts of seafood together into one deliciously spicy fishy stew. There’s something for everyone in here with prawns, squid, clams, crab, octopus, scallops, fish and oysters in a spicy with a hint of sweet red pepper paste broth. 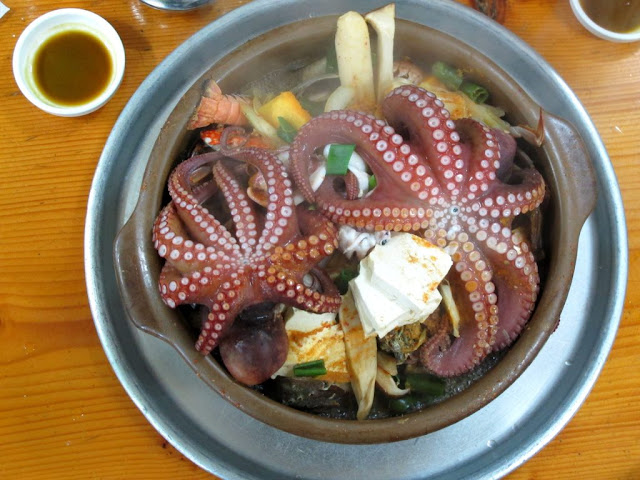 The dish can differ in ingredients from place to place and season to season depending on what is fresh and in stock, but expect it to be overflowing with as many seafood delights as you can imagine in one hot pot in the center of the table surrounded by vegetable side dishes and soju bottles. This dish is of course, best shared with a fellow seafood lover on a cold day in Jeju. 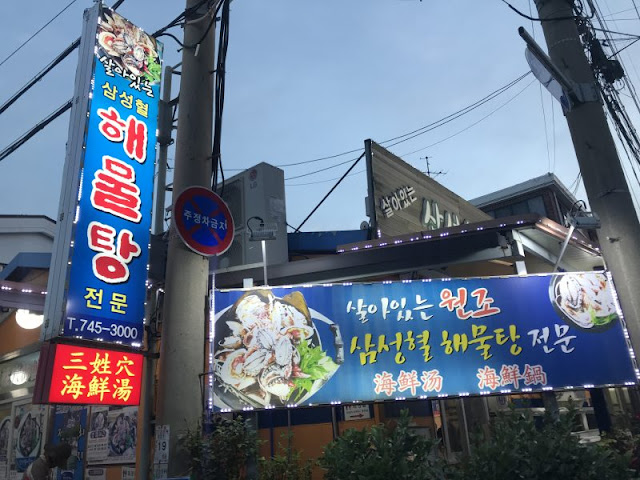 Where to get: Samseonghyeol Haemultang (20 Seondeong-ro 5-gil, Yeon-dong, Jeju-si, Jeju-do)
4. Jari Mulhoe | Cold Raw Damselfish Soup)
The beauty of Jeju food comes with its changing seasons as certain ingredients are only available during certain seasons. Jari Dom (damselfish) is without doubt Jeju’s summer specialty fish. Caught in late May and prepared as mulhoe (cold raw fish soup) solely in the summer, jari dom is enjoyed as a comfort food by the Jeju people. It is cut and eaten with bones in it, which enhances its umami flavor while being chewed. 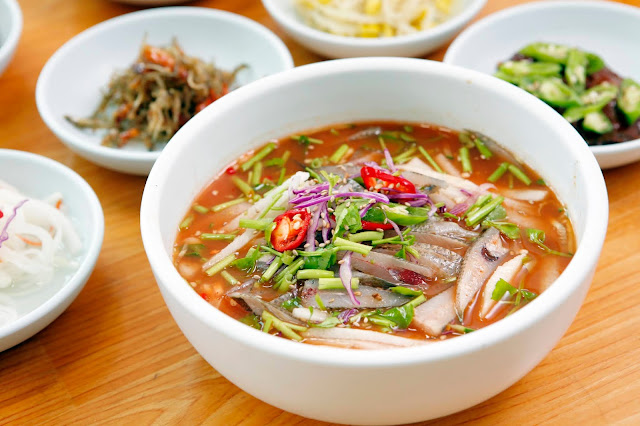 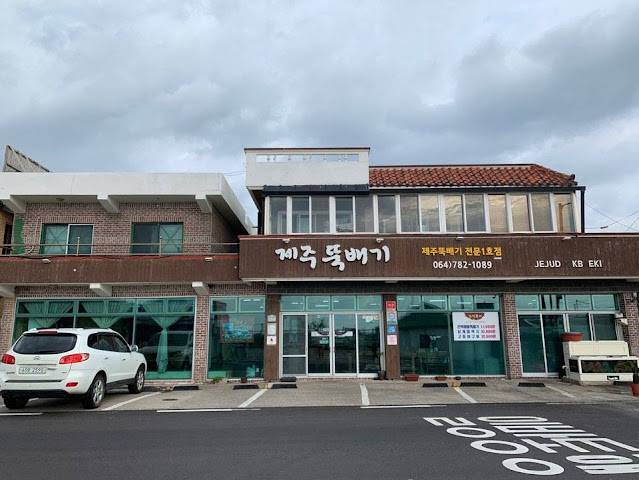 Where to get: Jeju Ttukbaegi (187-4, Bangi-dong, Songpa-gu, Jeju-do)
5. Mom Guk | Gulfweed Soup
In the Jeju language, mom refers to mojaban (gulfweed). Momguk has long been a customary dish at ceremonial occasions such as weddings or funerals in Jeju. Traditionally, momguk was made from leftover pork bones. When a celebration like a wedding took place, the whole pig was roasted and anything that was leftover from the pig would be thrown into a pot and boiled — sometimes for days. 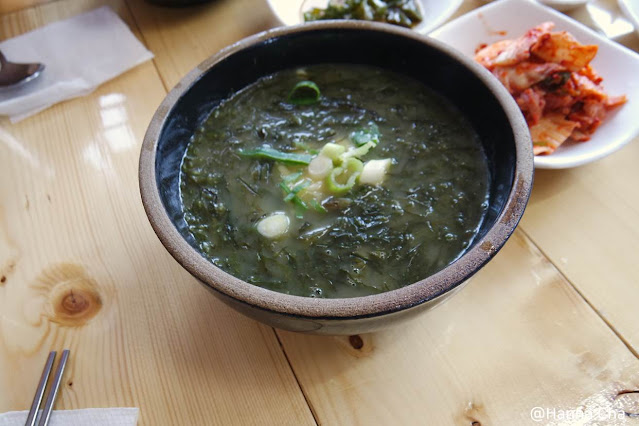 Jeju people did not like to waste anything. Similar to gosari yukgaejang, it is boiled with buckwheat powder and has a thick texture.
Where to get: Guksu Madang (1019-6 Ildoi-dong, Jeju-si, Jeju-do)
6. Bing Tteok | Buckwheat Pancake
Bing Tteok is a local traditional food item enjoyed in buckwheat-producing areas. However, it is only available in some parts of Gangwon-do and Jeju. First of all, you make the dough with buckwheat powder, spread it wide, add salted radish slices on it and roll it up. The name Bing comes from bing bing (the motion of rolling something). One can easily find bing tteok in any of the traditional markets of Jeju. 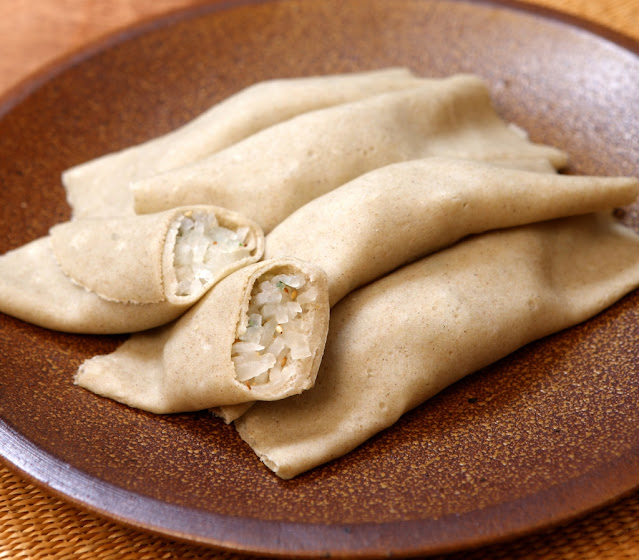 Where to get: most traditional markets in Jeju.
7. Kkwong Memil Kalguksu | Knife-Cut Buckwheat Noodle Soup with Pheasant
Jeju is the biggest producer of buckwheat in Korea. Also, a substantial number of pheasants live within its middle-mountain area. Kkwong Memil Kalguksu is a traditional type of Jeju cuisine known as an invigorating meal, using both buckwheat and pheasant as its main ingredients. The noodles are wider, thicker and shorter than normal noodles that are cut with a knife while the pheasant broth has a lighter flavor than chicken stock and is less greasy than duck broth. 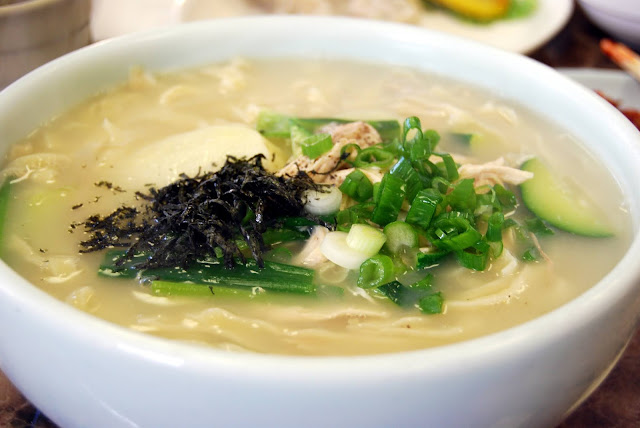 Where to get: Guksu Madang (1019-6 Ildoi-dong, Jeju-si, Jeju-do)
8.  Okdom Gui | Grilled Sea Bream
Okdom (sea bream) acquired its name for its bulging forehead which looks like jade marble. The fish can be caught in abundance around Jeju Island so it's not surprise to find it as a key ingredient in a disho on the island. As gogi (meat) usually refers to pork in the Jeju language, the word saengseon (fish) is another word for okdom, rather than other fish species such as mackerel or hairtail.
When sun- or airdried, the fish becomes more enriched in flavour, the preferred choice of many locals. While tourists prefer it to be grilled, the Jeju locals usually consume it as a soup.

Where to get: Umeoniwa Jangdokdae (532-3 Oedo-dong, Jeju City (제주시 외도1동 532-3)
9. Galchi Jorim | Hairtail Fish Soup
For most people, it would make more sense to eat galchi grilled or braised. In Jeju, however, the fish is actually preferred as a soup as well. Some might imagine it to be quite fishy, but the taste is quite similar to that of a bland fish soup or somewhat like our ikan bilis soup. 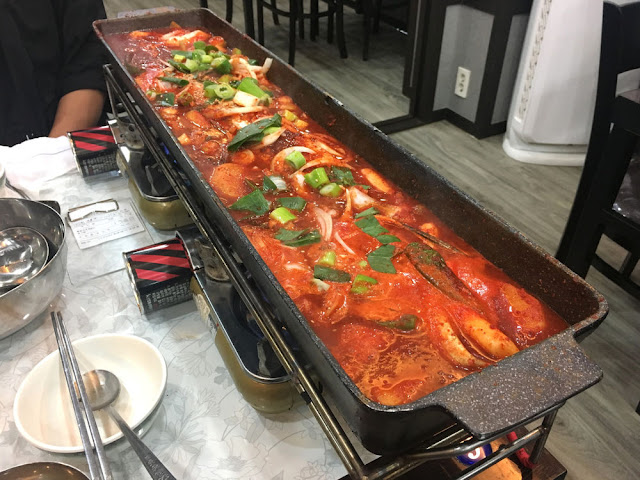 Since it is boiled with vegetables such as squash, taxibage and green chills, it tastes both sweet and spicy in equal measure. In Jeju, Galchi guk is also recommended as a hangover soup, perfect after a night of Jeju soju.
Where to get: Negeori Restaurant (20, Seomun-ro 29 beon-gil, Seogwipo, Jeju Do)
10. Omegi Tteok | Red Bean Rice Cake
Since it is almost impossible to grow rice in Jeju, the locals have farmed millet or barley instead. Omegi tteok is a type of rice cake made by kneading millet powder. Recently, glutinous rice or mugwort powder has been added, turning the dough a shade of green. 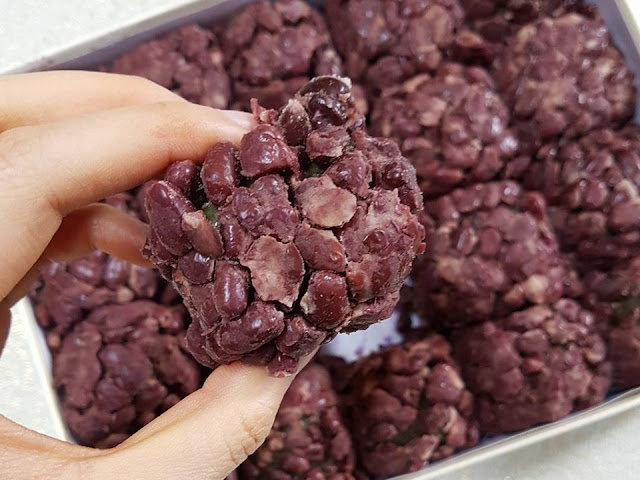 The millet dough is stuffed with red bean paste, rolled into round balls and coated with mashed red bean, bean powder and nuts.
Where to get: most traditional markets in Jeju.
~~~
Of course, this list merely taps the surface of the local cuisine offered on Jeju island. To truly discover what they have on the local menu, don't be afraid to be adventurous and just try. Who knows, you might discover a new favourite dish that might have you coming back to Jeju for more.
Keep update on travel information at Korea Tourism and for more information about Jeju, what to do, what to see and eat, then browse through Jeju Tourism's site.