It has been a year of hikes for me. In February I had Bukit Tabur nicknamed after me by my bootcamp friends and had obtained a Datukship from Gunung Datuk. While I have yet to strike off Mount Kinabalu, Gunung Angsi and Gunung Nuang from my bucket list of places to hike, I am pleased to say I can do so for One Pine Tree Hill of Fraser's Hill.

﻿
The morning we set out for Fraser's Hill was a quiet Sunday and the start of the March school holidays, something all of us conveniently forgotten. Our little convoy of four cars travelled through Rawang and Kuala Kubu Baru, took to the winding roads heading up to Fraser's and we reached the town center by 8am. After the two hours' drive, we made a quick toilet stop because once inside the forest, the only toilet available is amidst the foliage off the trail.

﻿﻿﻿
We reached the entrance of Pine Tree around 830am and set off without hesitation. I think our main motivation was to finish this as quick as possible so that we could later indulge in the famous scones from the Ye Old Smokehouse. Although...even at the start of the trail, we lost half the group as they were taking memorabilia pictures at the entrance. Half of that group turned back after the first kilometer or so and here's why.

Pine Tree Hill is the most challenging trail Fraser's has to offer out of its eight jungle trails. At a moderate pace, it takes about eight hours to reach the peak and back. While its distance comes up to 5.5 kilometer to its peak, its trail goes up and down and along hills and at times, the pathway becomes muddy and riddled with fallen branches and trees. At some parts, there are concrete and wooden stairs which I dreaded because it meant I would have to encounter them again on the way back. After all, what goes up (and down), must go down (and up). 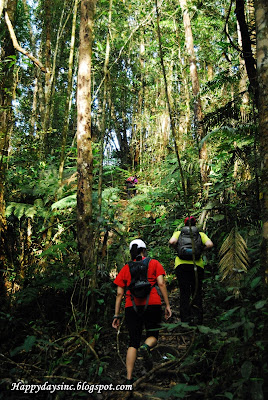 Now I have heard tales of leeches on Pine Tree Hill. We were fortunate that no one in our group got bitten although we were armed to the teeth with salt packets stolen taken from McDonalds.


Throughout the hike there are signs indicating the distance left to go. We would stop at this signs to catch a breather and to refuel ourselves with homemade brownies and powerbars. The cooling climate, keeping an even pace and taking frequent but short breaks really helped our group in tackling the trails.

The last slope was particularly tricky as ropes were required for us to pull ourselves up. After approximately ten minutes of scrambling up ropes and roots, we reached the Pine Tree peak at 1045am.

There we rested for 10 minutes, snacking and taking pictures to commemorate the achievement before deciding that since we were ahead of schedule, why not try for Twin Peak!

The hike to the neighbouring peak took us about half an hour and it was no less easier than the earlier trail. In fact, it was harder with thicker bushes and foliage in the way due to the lack of hikers passing through. But the view at Twin Peak was stunning. We could see the massive mountain range ahead of us with specks of approaching rain clouds. After 5 minutes of resting and phototaking, we departed Twin Peaks at and by 12pm, were back at Pine Tree Hill.

Aware that rain clouds were closing in fast, we forgo rest and started heading back and that was when the trail seemingly got harder. Even through we were going back the same way we came, everything was in reverse now. As I mentioned earlier, up was down and worst still, down was up.

I will be honest. It was mentally-taxing because at this point, our group had split into smaller groups of two or three people moving at different paces. I was somewhere in the middle and at some point midway, was on my own. The trail was near-impossible to get lost on but my brain pretty shut down during the two and a half hour hike back  and let my feet do the walking. Rain fell and I was soaked thoroughly before it stopped. It was refreshing though and gave me an extra boost to keep moving.

Then came the stairs. At each upward stairway (to hell), I made the mistake of thinking the entrance was just at the top only to find more trail. Thank goodness I had my mp3 to keep me moving and my camera to entertain myself with.

﻿
I reached the entrance at 215pm and although exhausted and soaked, was quite pleased with the pace I had and that I actually completed Pine Tree Hill! The last of our group emerged at 230pm and altogether we had taken about 6 hours!

While that should have bought us more time to feast on scones, the weather had other ideas and gave us another downpour. As it often gets misty after a rain, the group decided to head back to Kuala Lumpur before the visibility on the roads down dropped. I, on the other hand, had decided to make the most of this trip (since I don't have work the next day) by staying overnight with my sister and a friend but more on that in another post.

Unfortunately, we didn't get a chance to capture a group photo at the entrance or have our celebratory scones together. Oh, well. I am very certain that this won't be my last trip to Fraser's although I can't say if I could be tackling Pine Tree Hill anytime soon.

Maybe it's time to start ticking off the other seven Fraser's trails from my list.

Tips for Pine Tree Hill
1. Bring lots of water and isotonic drinks.
2. Bring food that gives you quick energy burst.
3. Bring your camera.
4. Mental preparation is encouraged because this 6-8 hours hike is no walk in the park.
5. Watch your foot and your head.
6. First time hikers should go with someone experienced.
7. Inform someone where you're headed and provide them with an estimate finish time.
8. Plan your pace and stick to your estimated times of arrival. If you're off schedule, just turn back.
9. Shoes, shoes, shoes.
10. Go with a group of friends with similar fitness levels as you.

For more pictures, check out my Facebook album here.