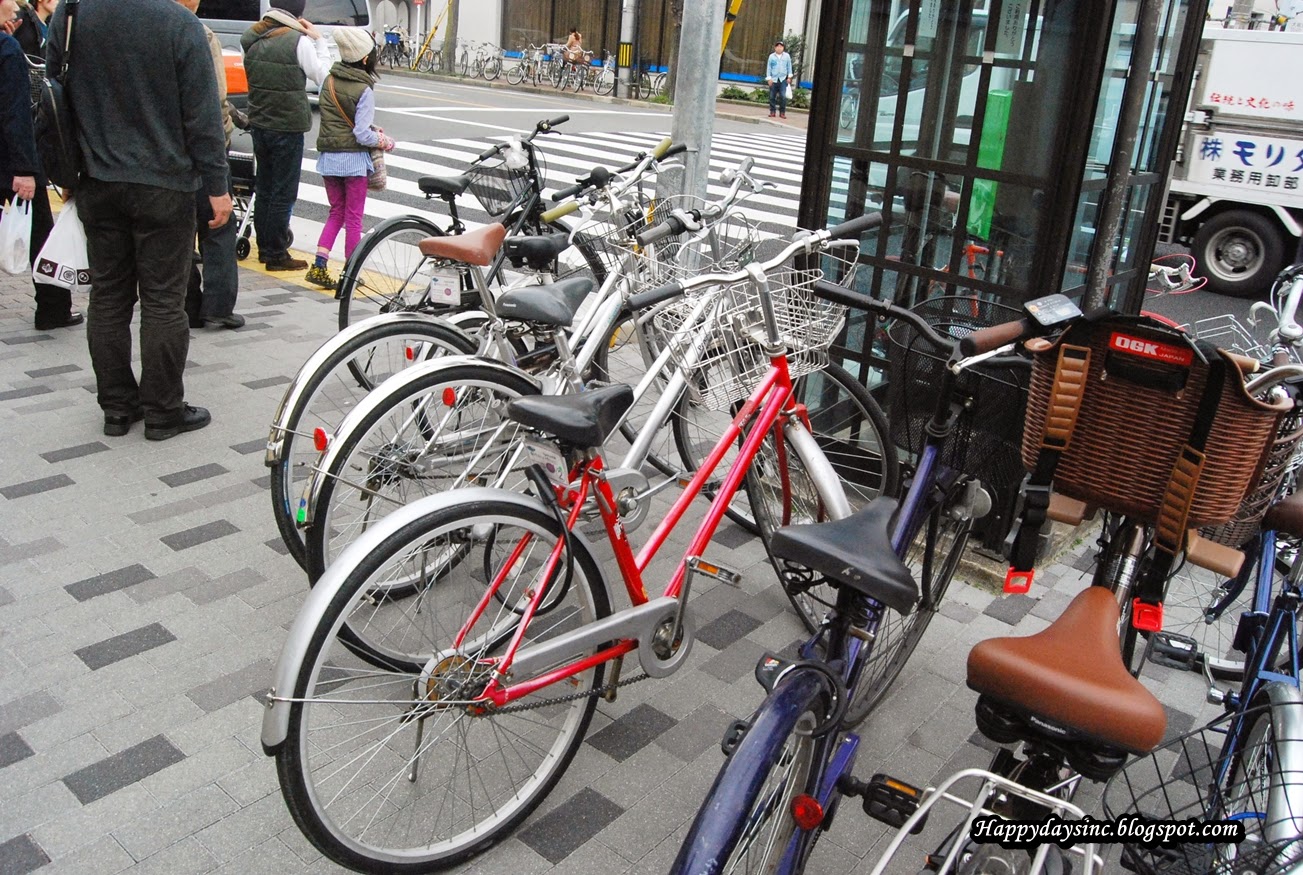 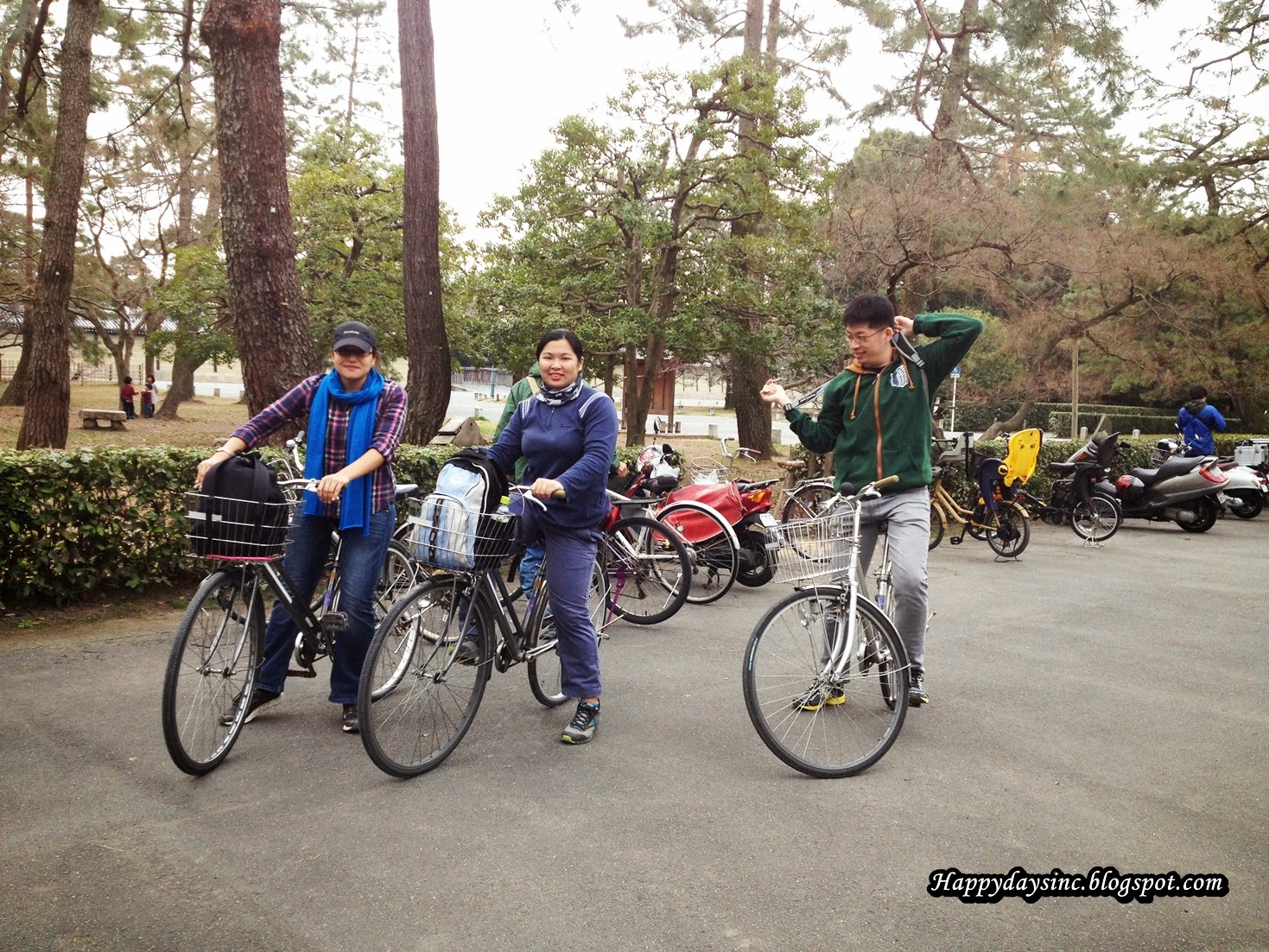 Cycling in Kyoto was breeze with pedestrians stepping out of our way with the ring of our bells and the sidewalk wide enough to accommodate cyclists and walkers. We were having so much fun that we didn't realize that half an hour had past before we reached the palace. Around the palace was the palace gardens which doubled as a public park for the people to walk, run or cycle around. When we were there, the Sakuras were in the early stages of blooming which we saw some along the way.

We parked our bikes near the Imperial Agency Office and headed to the palace entrance where tour groups and independent groups had gathered. After giving them our booking number (printing out the confirmation email would help as it had the barcode and number. I forgot.), we were guided to a waiting room/souvenir shop where our guide played a brief video on the history of the palace. Lockers were available there as well. 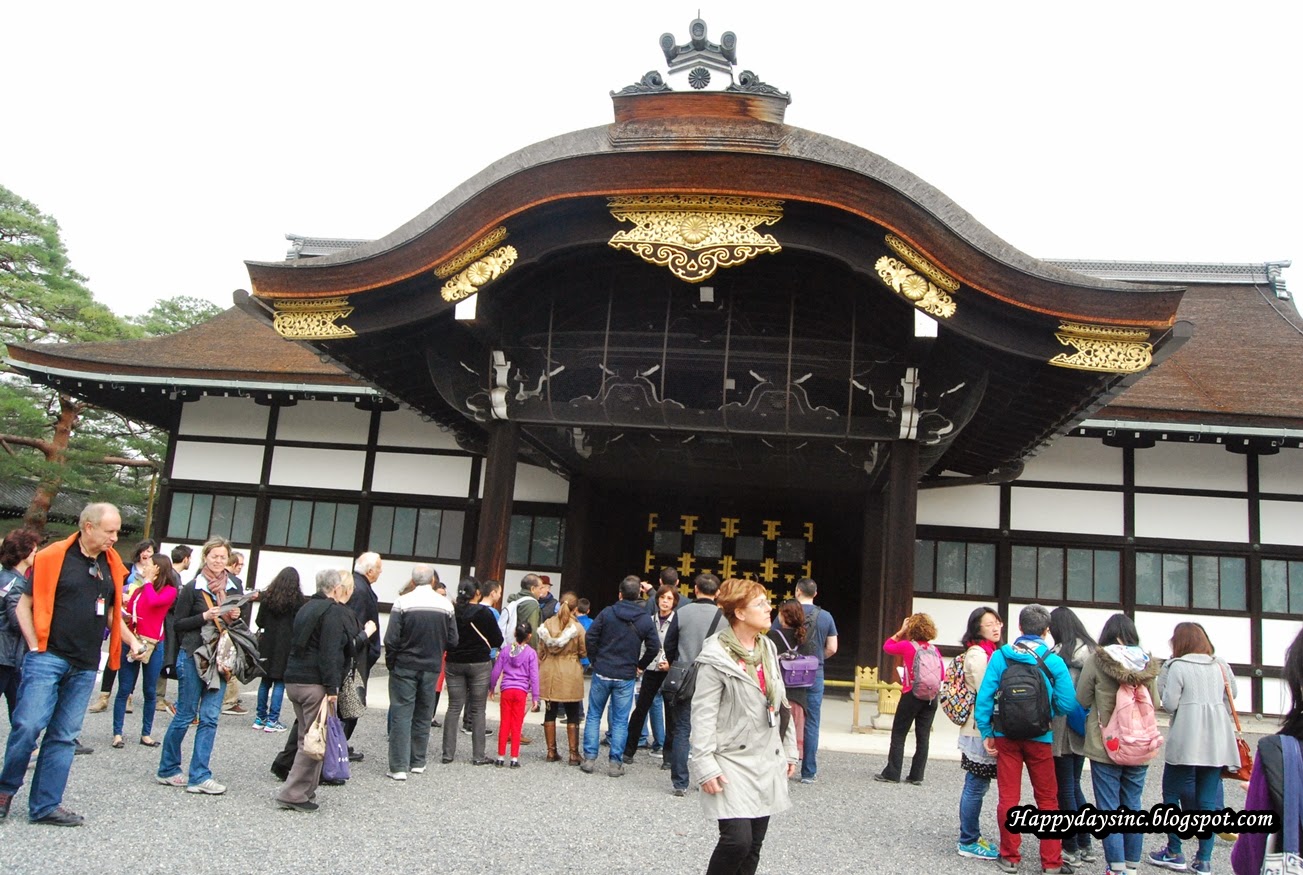 Cousin and I bought our stamp collecting book there and added our first chop to its pages before the tour started. The tour was conducted in English and it was massive group of close to 50 people trying to listen in on the petite local guide while trying to capture a photo of the palace buildings. An additional staff followed the group, circling us to make sure no one wandered off. A western lady did and refused to follow the group despite being asked nicely by the guide. She was promptly told off by both guides who told her that she would be escorted off the grounds if she didn't follow the group. That got her to shut up and begrudgingly trail after the group. 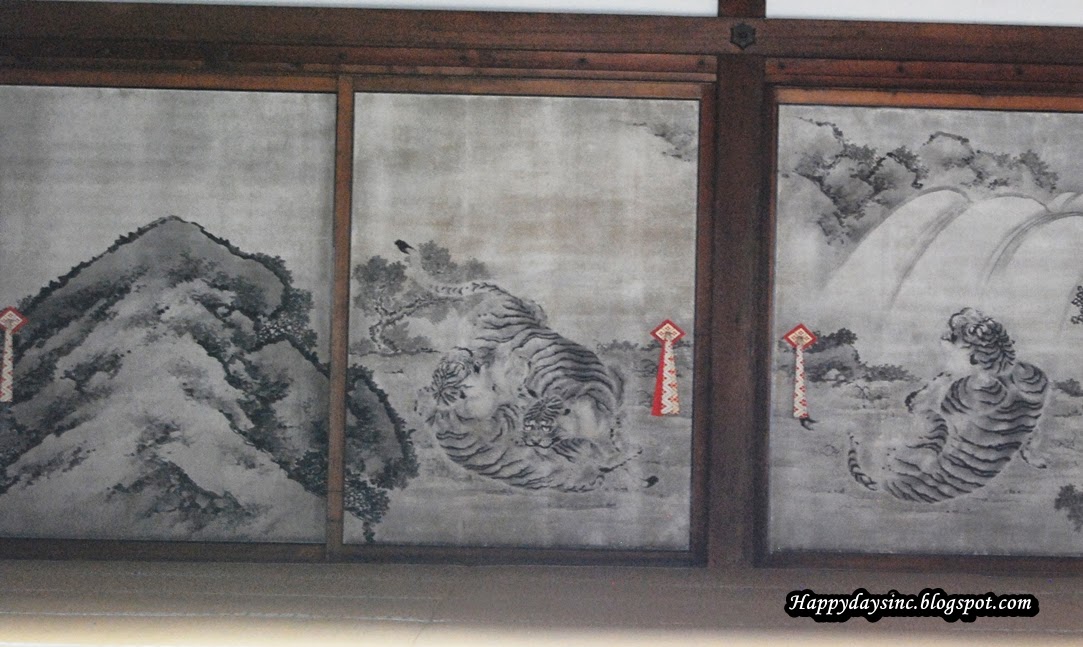 The palace ground and gardens were beautiful, peaceful and serene despite being off-limits on most parts. We were shown the waiting rooms with different floor designs and wall paintings. Each room was meant for the different classes of people visiting the Emperor back in the days with the tiger being meant for the upper class society and the plum tree paintings for the common people. 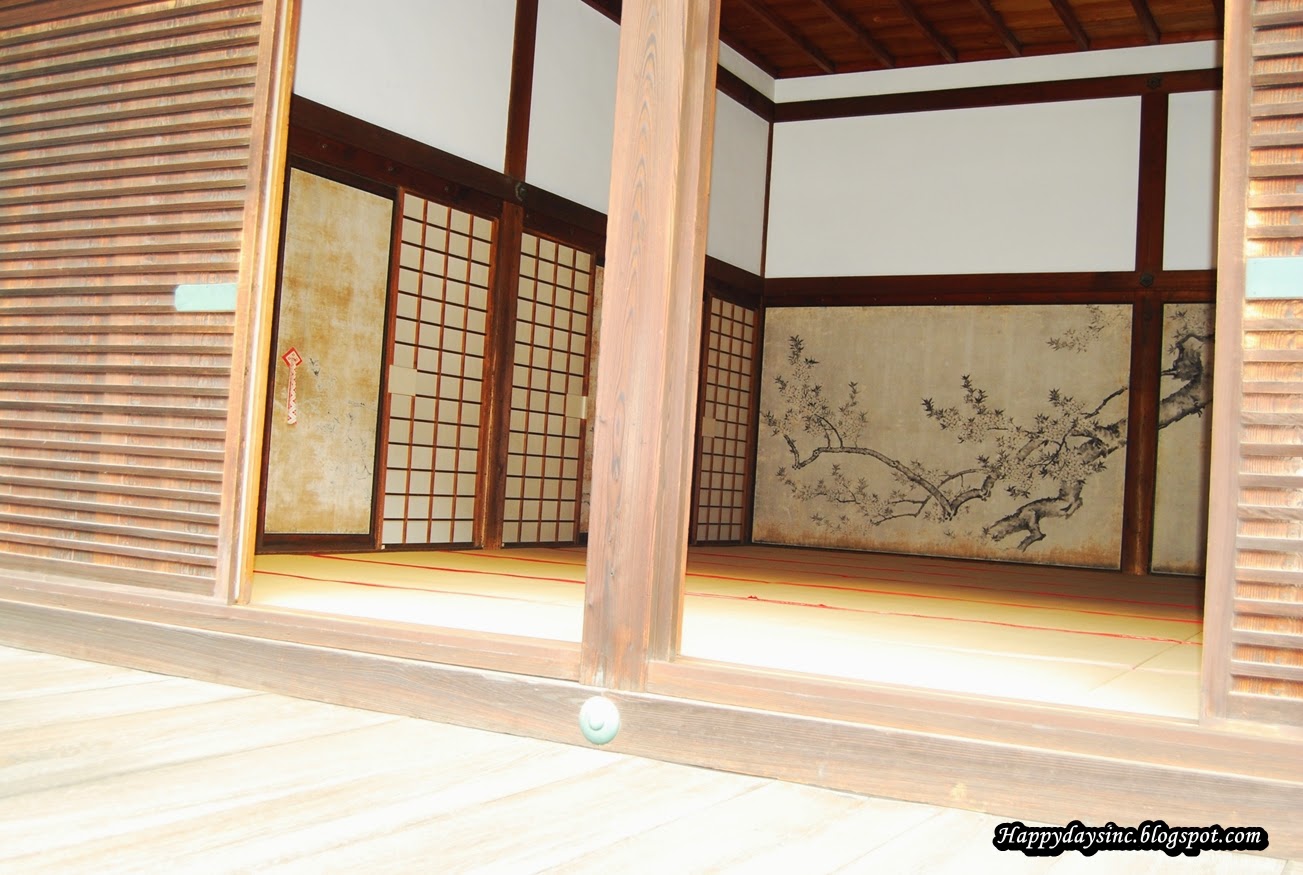 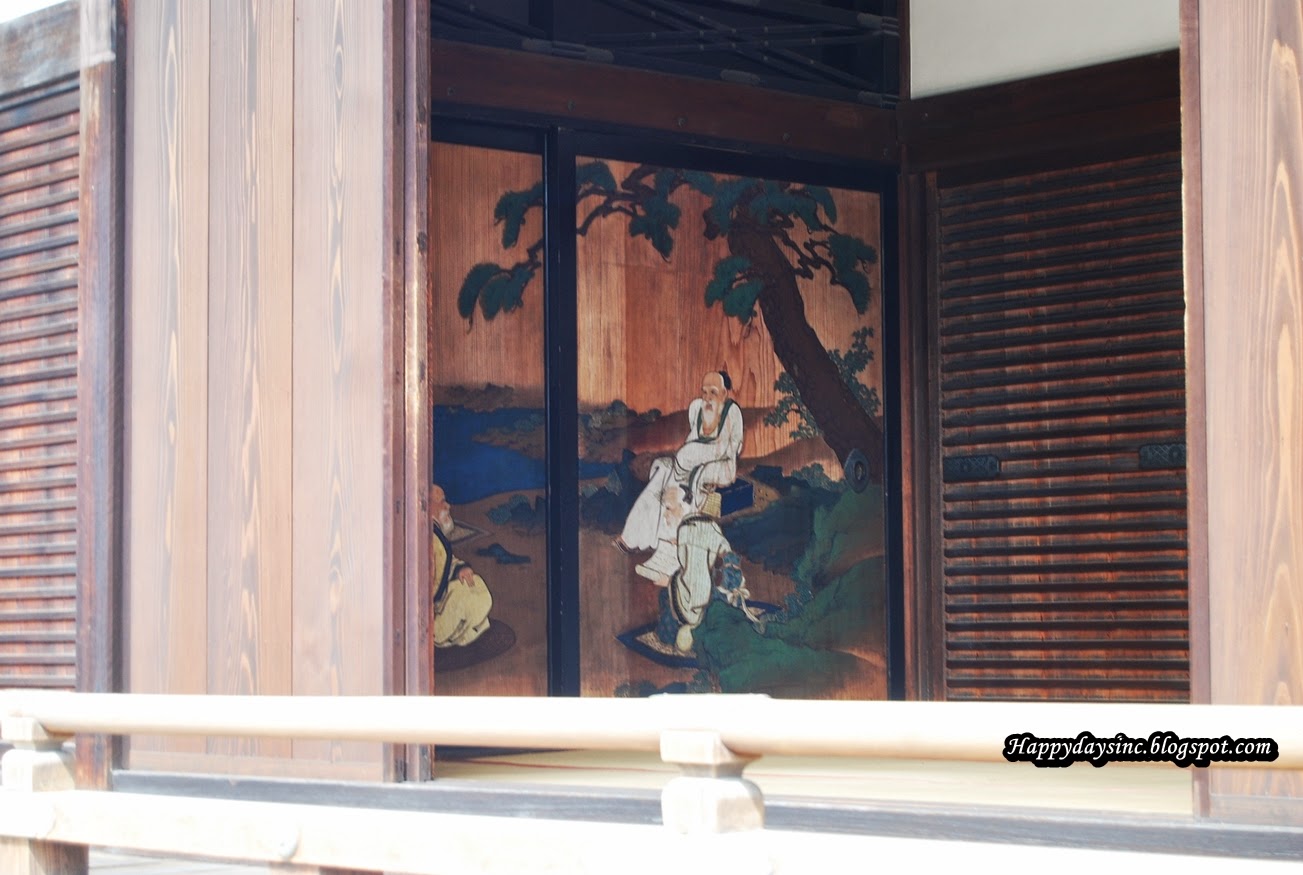 The gardens were my favourite with cherry blossoms blooming its pretty pink flowers against a zen landscape of a pond, lush trees and a bridge leading to the middle of this quiet escape. Except we were not allowed to enter the garden.

We were shown the veranda in which former US President George W. Bush sat watching the local version of a football match in the courtyard in 2005. We were told that because majority of the palace roof and structure was made of cypress wood, it was prone to catching fire and it did, eight times. Its structures has been rebuilt each time to mirror the original with the rebuilding completed in 1855. 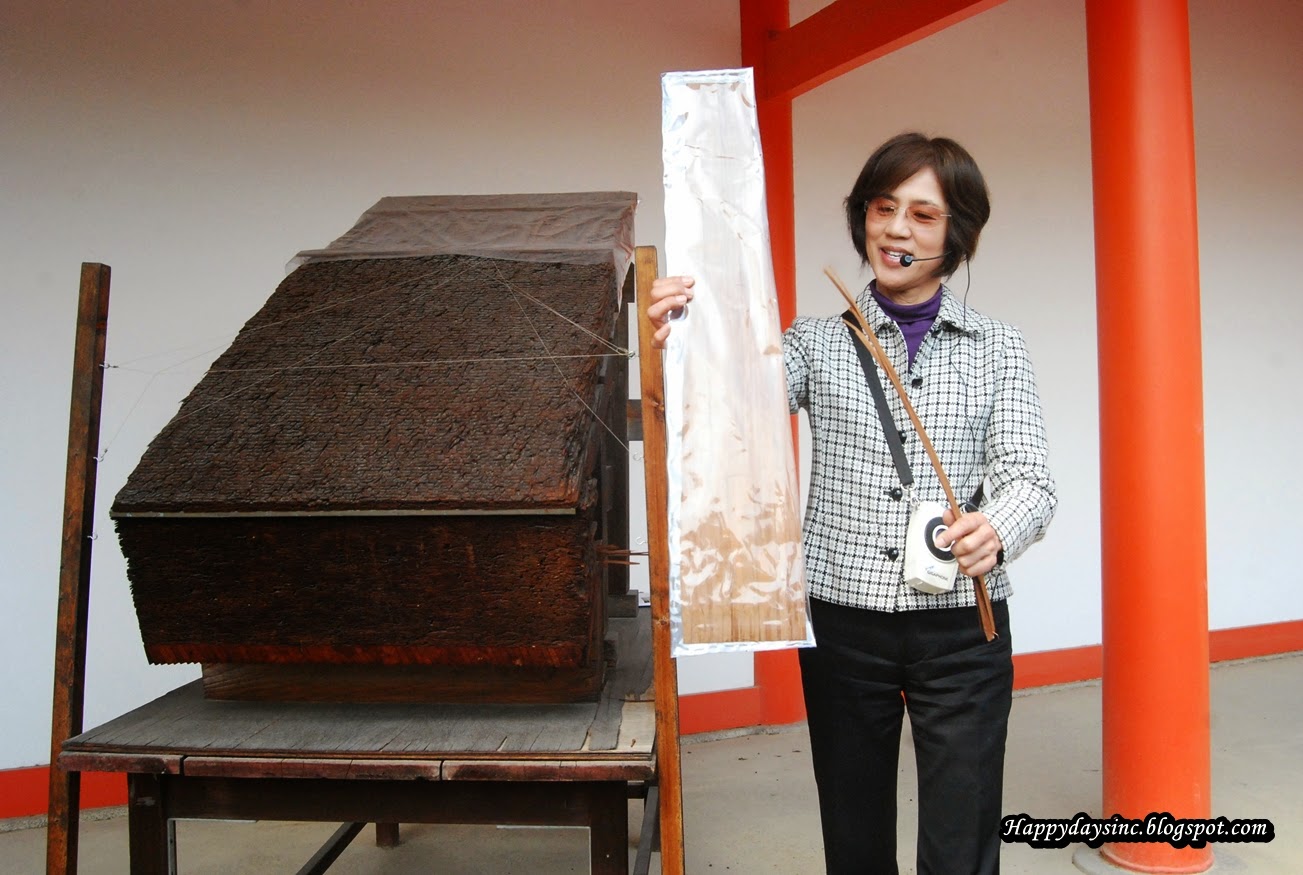 The tour lasted approximately an hour and after that, we were off to our next stop, Kitano Tenmangu Shrine. On the 25th of every month, a flea market is held on the shrine grounds and the surrounding area and it just so happened that it was 25 March that day. 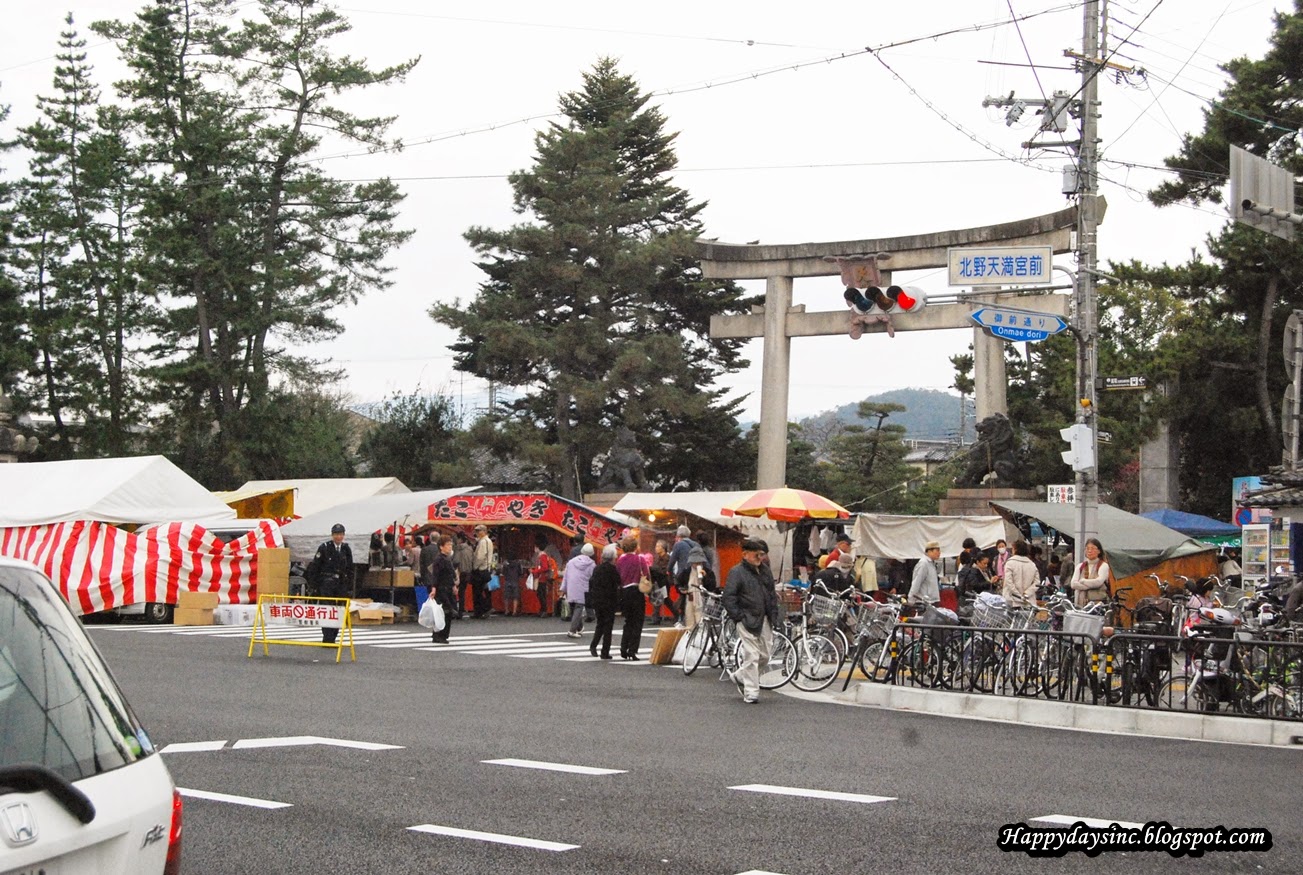 It took us about another half an hour to cycle to Kitano Tenmangu Shrine and when we got there, the market was buzzing with life. We parked our bicycles at a street corner, along with a lot of other bicycles which technically was illegal but you know what they say, when in Japan, do as the Japanese do. So we did. It never cease to amaze me that we could just leave our bikes there, unchained and it would still be there when we get back.

If I haven't made it clear before, I'll say it again: I love Japan. 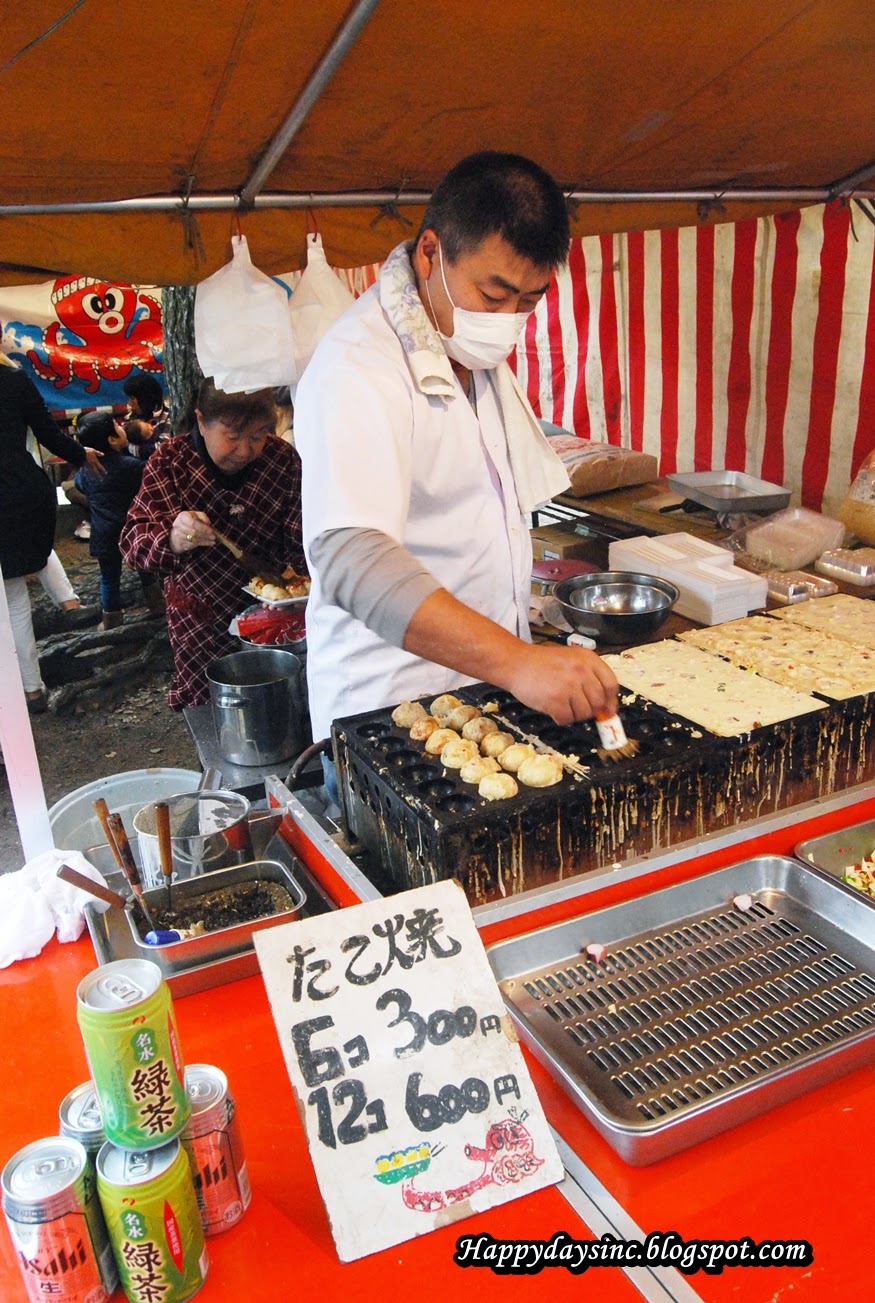 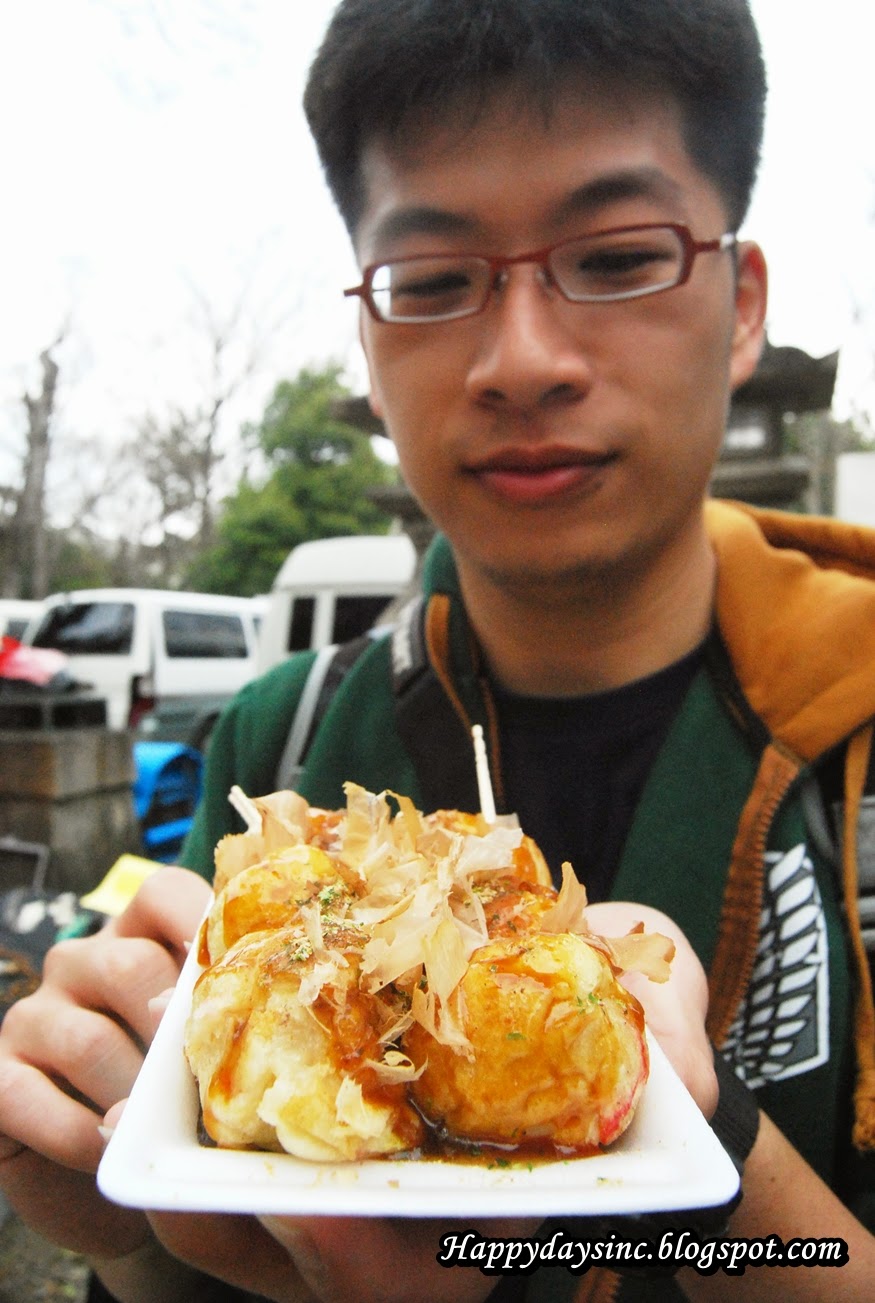 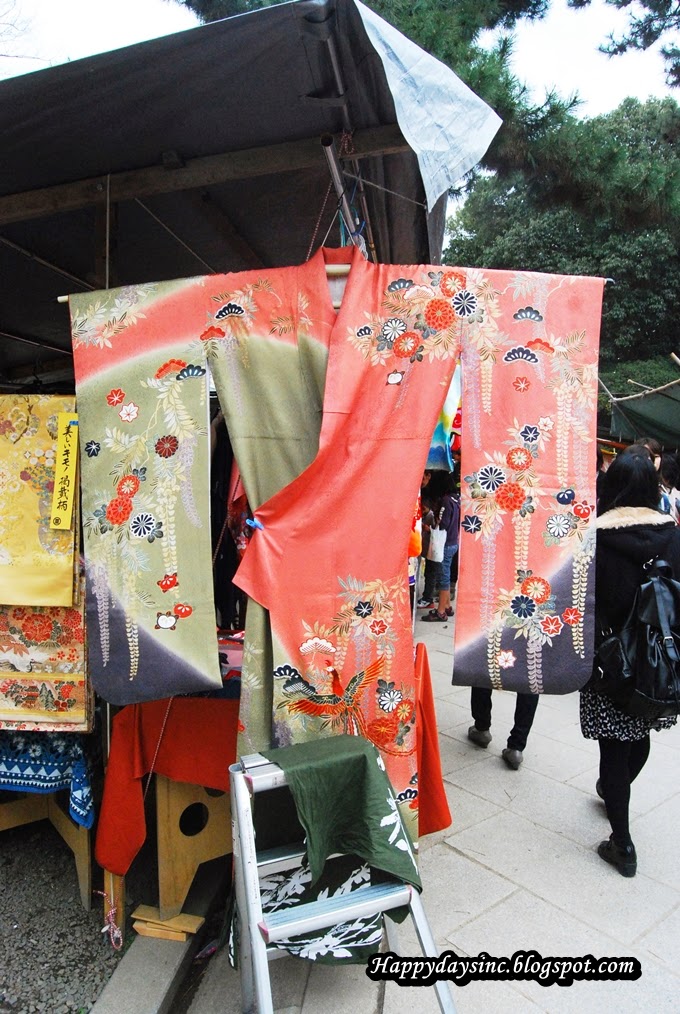 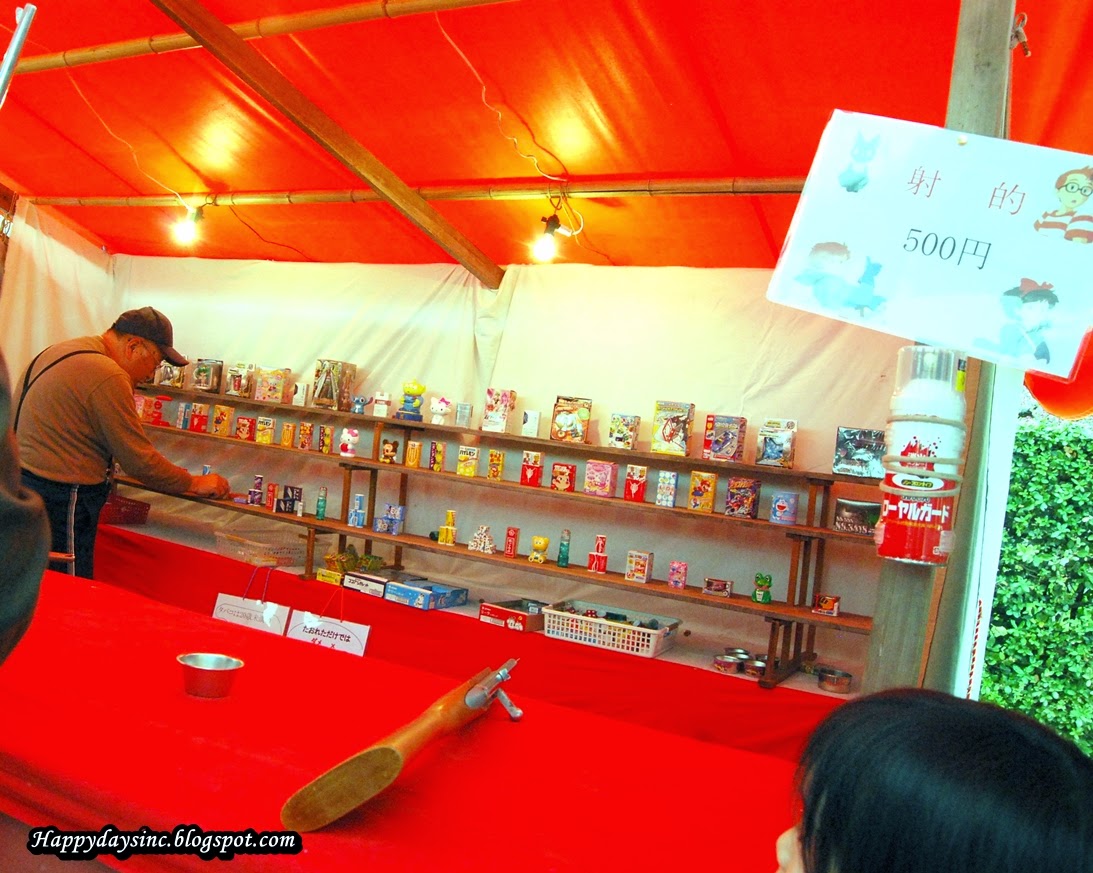 And the best part was Kitano Tenmangu shrine had almost everything that was awesome about Japan all in one cool market. Food, games, antiques, souvenirs, kimonos...second-hand stuff. It was like a treasure trove for bargain-hunters and those looking to experience the local culture. It was heaven. 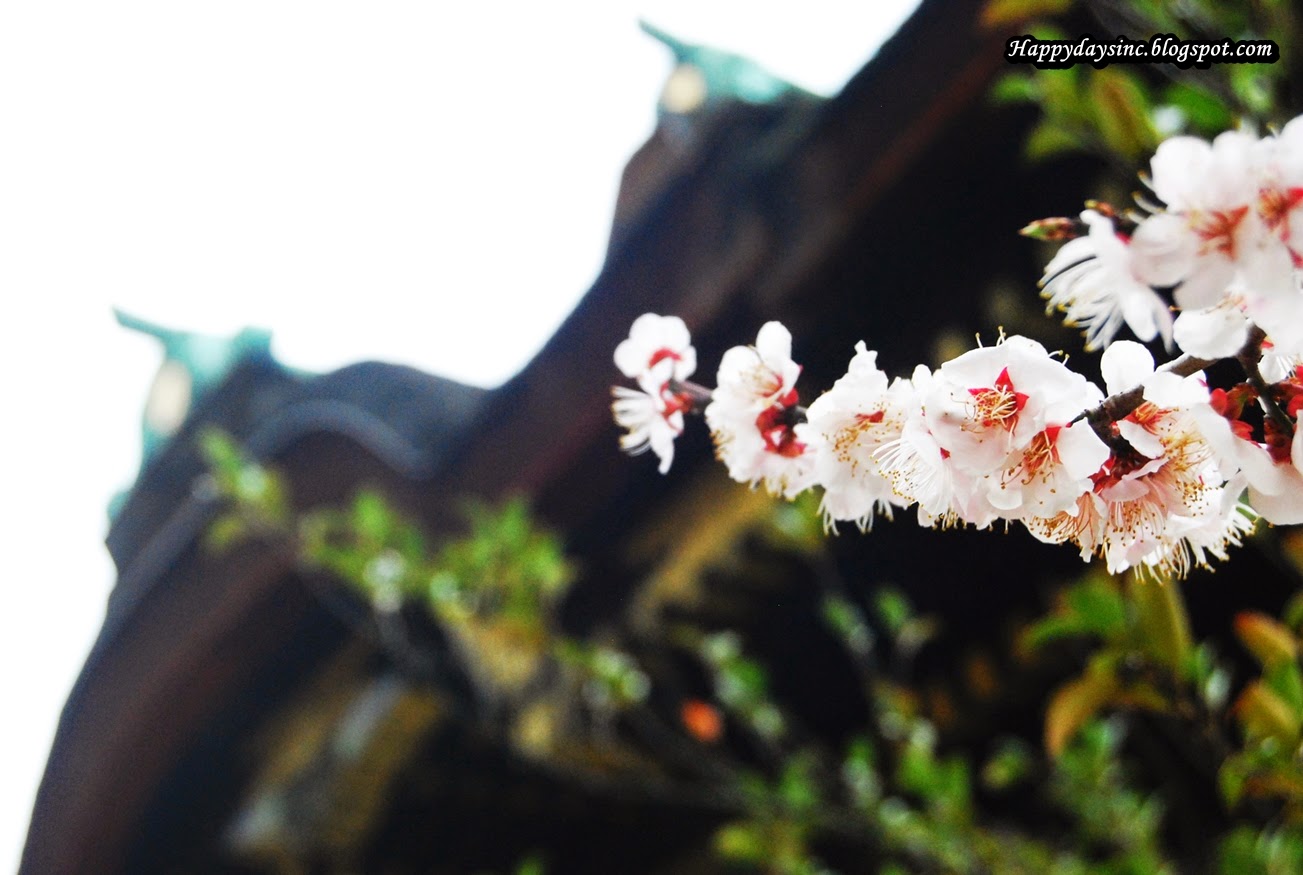 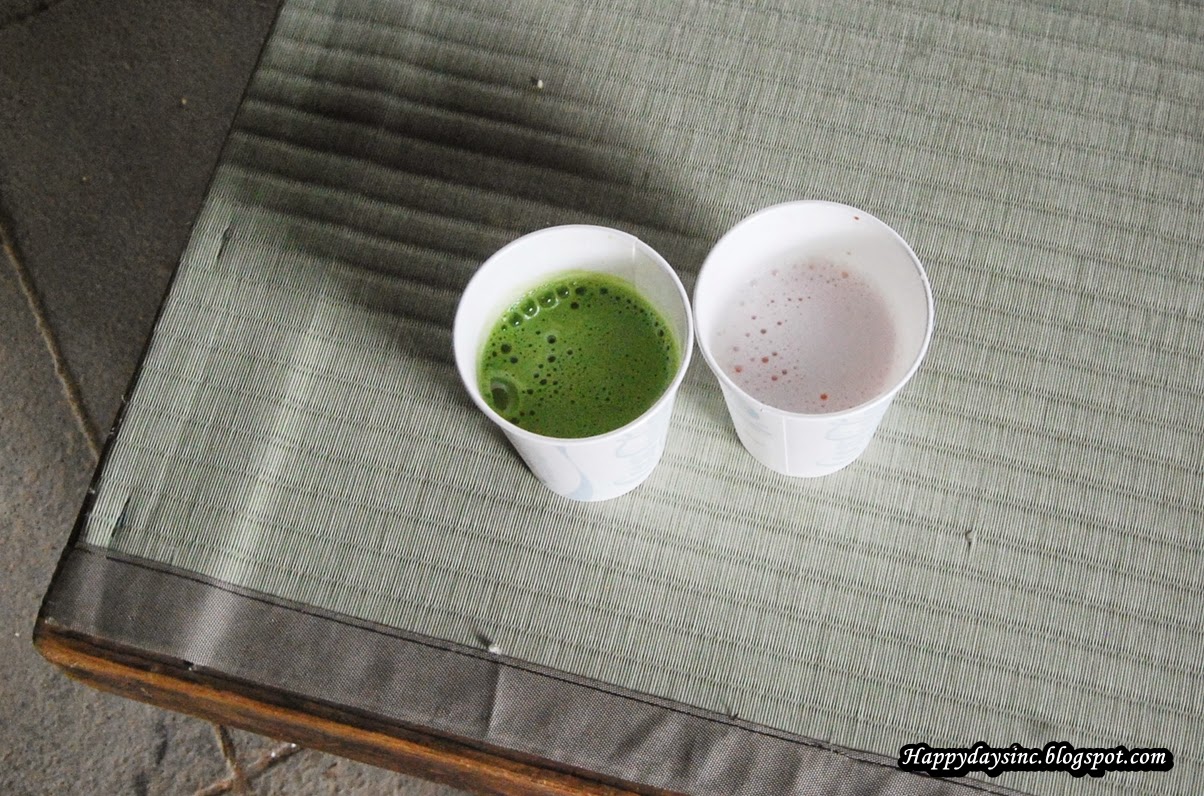 The actual shrine grounds itself led into a cherry blossom garden with almost all in half bloom. Here we saw different tones of pink and white flowers and a lot of tourists and locals snapping photos. Naturally we joined in. We rested a bit here, drank the most delicious strawberry milk latte from a vending machine and grabbed a bite from one of the stores before we took off for the golden attraction of Kyoto, Kinkaku-ji temple.

The temple was about a 2km cycle uphill north from Kitano. Fortunately the incline was gradual so we didn't kill ourselves too much. We got to the Golden Pavilion in good time as it was 4pm by then and the attraction closes at 5pm. After finding slots to park our bikes at the taxi waiting area, we purchased our tickets and found ourselves joining a massive crowd of tourists there to see the same thing. 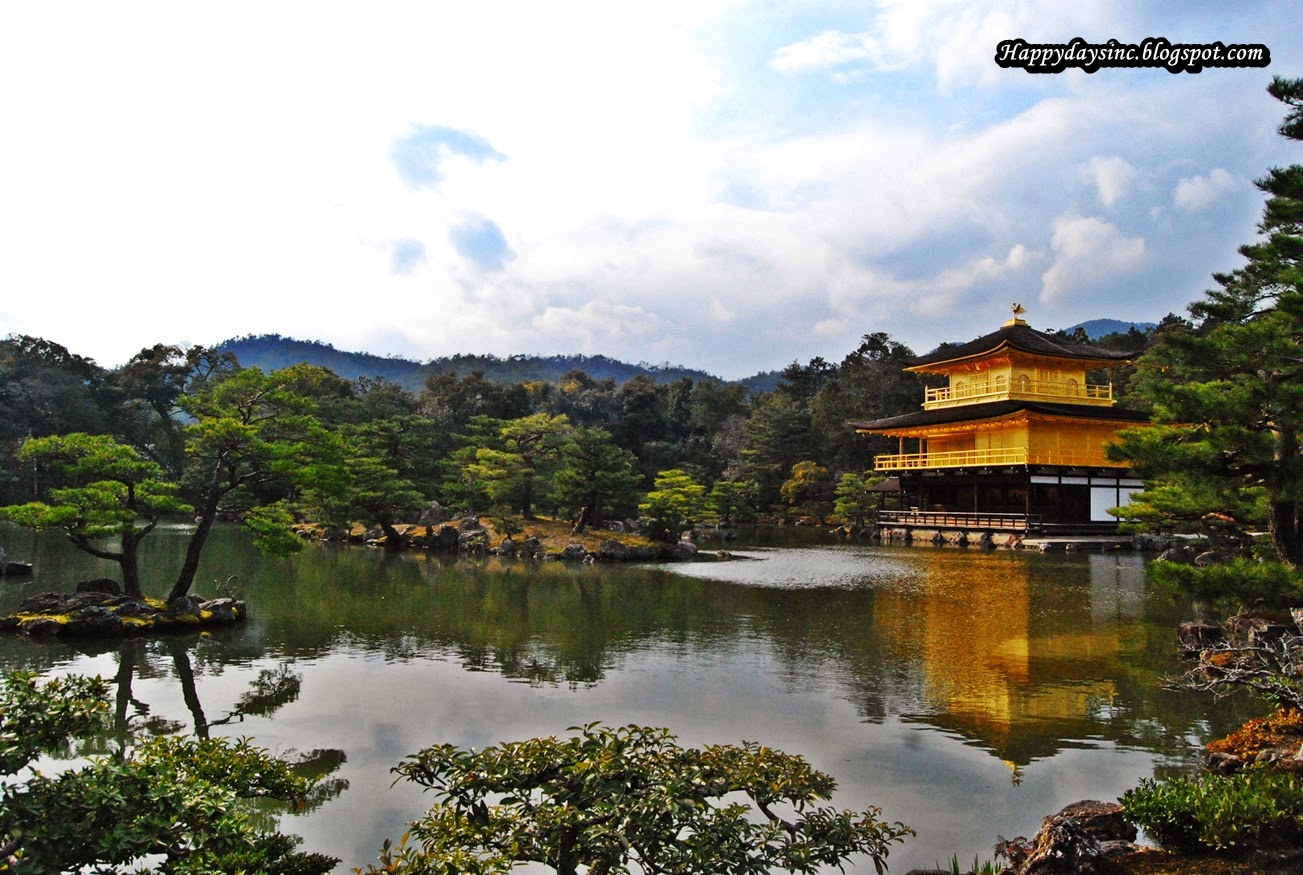 It wasn't a pleasant experience trying to jostle and nudge people just so you could get a decent photo of you and the temple in the background but the sight of the golden structure shimmering in the late afternoon sun was surreal.

After getting our shots, we followed the pathway that led through eating spots and stalls. We spotted at a bench to contemplate our next stop and to eat ice-cream and decided to head back to the hostel to drop off our load. And off we went again!

This time, the journey took us an hour and a half in general with us almost thrown from our bikes a few times. As it was downhill, we were having the times of our lives as we sped past walkers and a few cars stuck in traffic. However our bums and thighs paid the price later due to the bounciness of the ride and we were moaning and groaning by the time we reached the hostel. 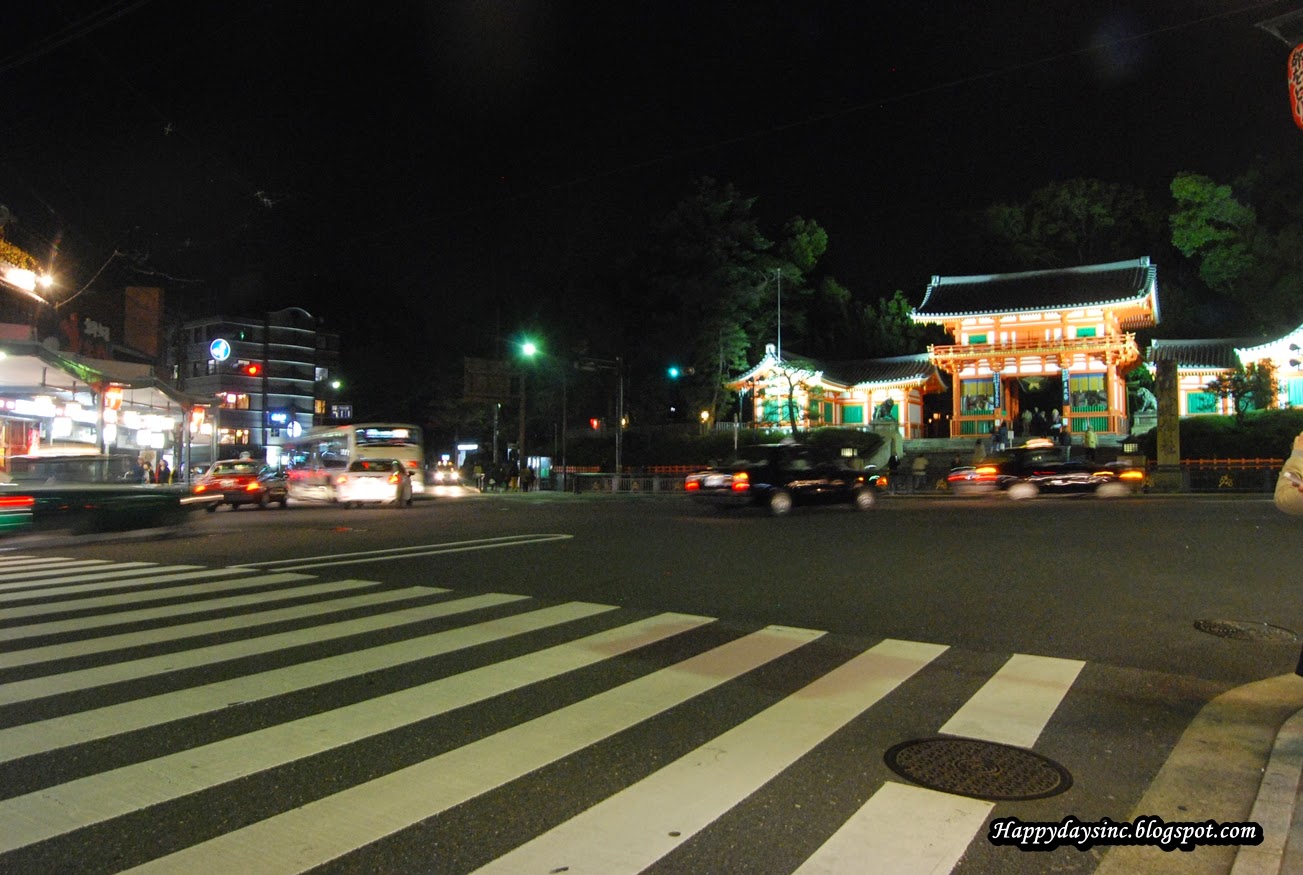 However, that is not the end of our adventure as we decided, that for dinner, we would cycle along the Kamogawa river to Shijo Avenue where Gion street was. While the view of the river was lovely, the ride was not as the ground was gravel with little grip and a lot of bumpiness. By the time we reached Shijo Avenue 2km away, our bums were hurting again. It was also then we found out that Cousin's bicycle had a flat tyre!

Parking was a challenge here as it was high-traffic area and the only known parking lot for bikes was full. By luck, a Japanese girl who was on her way to her parked bike and upon seeing I was looking for a spot, quickly removed her bicycle and graciously gave me her spot. Cousin on the other hand was not so lucky and had to park somewhat illegally. 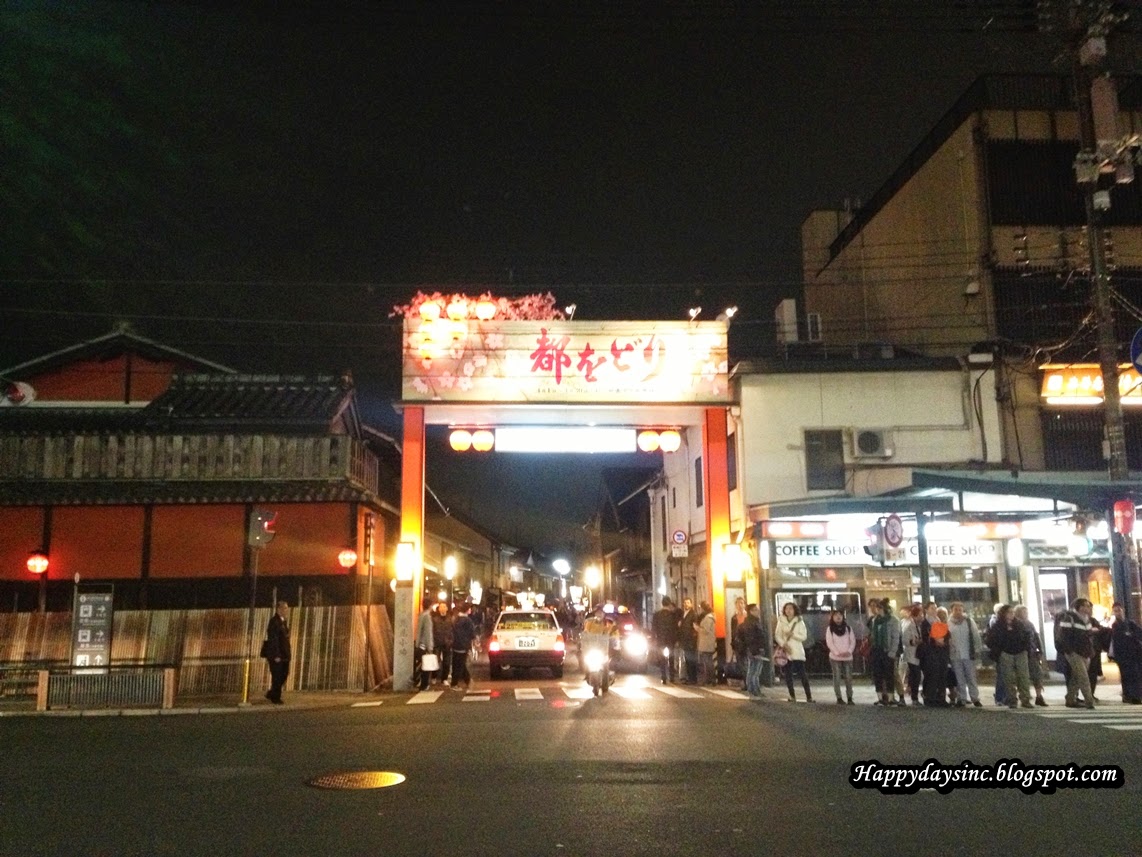 Then on foot, we found our way to the famous Gion corner was known for its ochaya (teahouses) and Geisha sightings. The area that housed the rows of teahouses and restaurants was called the Hanami-Koji. It was late evening by then and there was no chance of seeing any Geishas that night as most would be at their engagements already but I got to experience what the old Gion would be like with the lanterns illuminating the streets and the Kabuki posters on the wooden walls. The only thing that was out of place was the matte black Mercedes SLR parked in someone's garage. 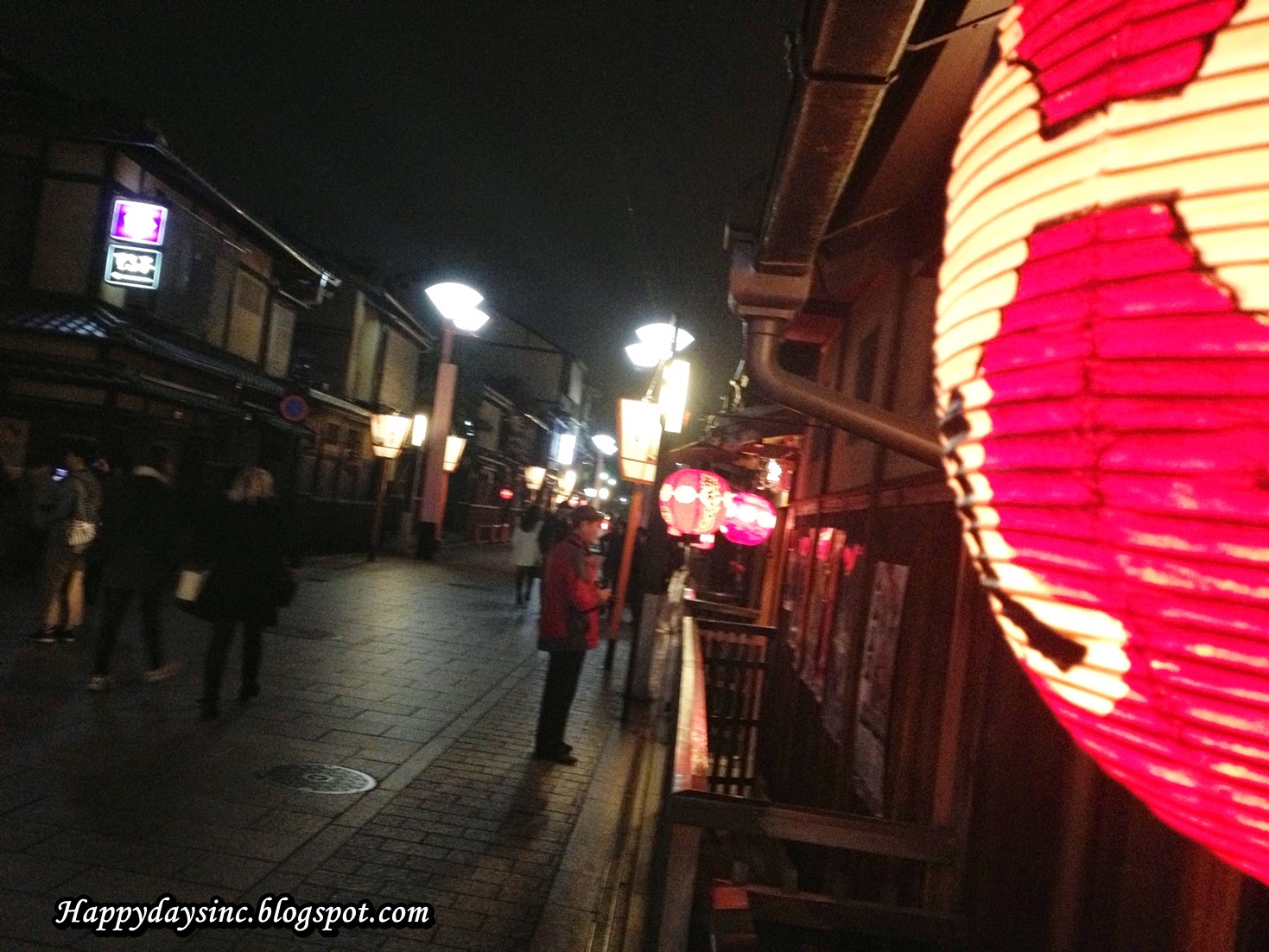 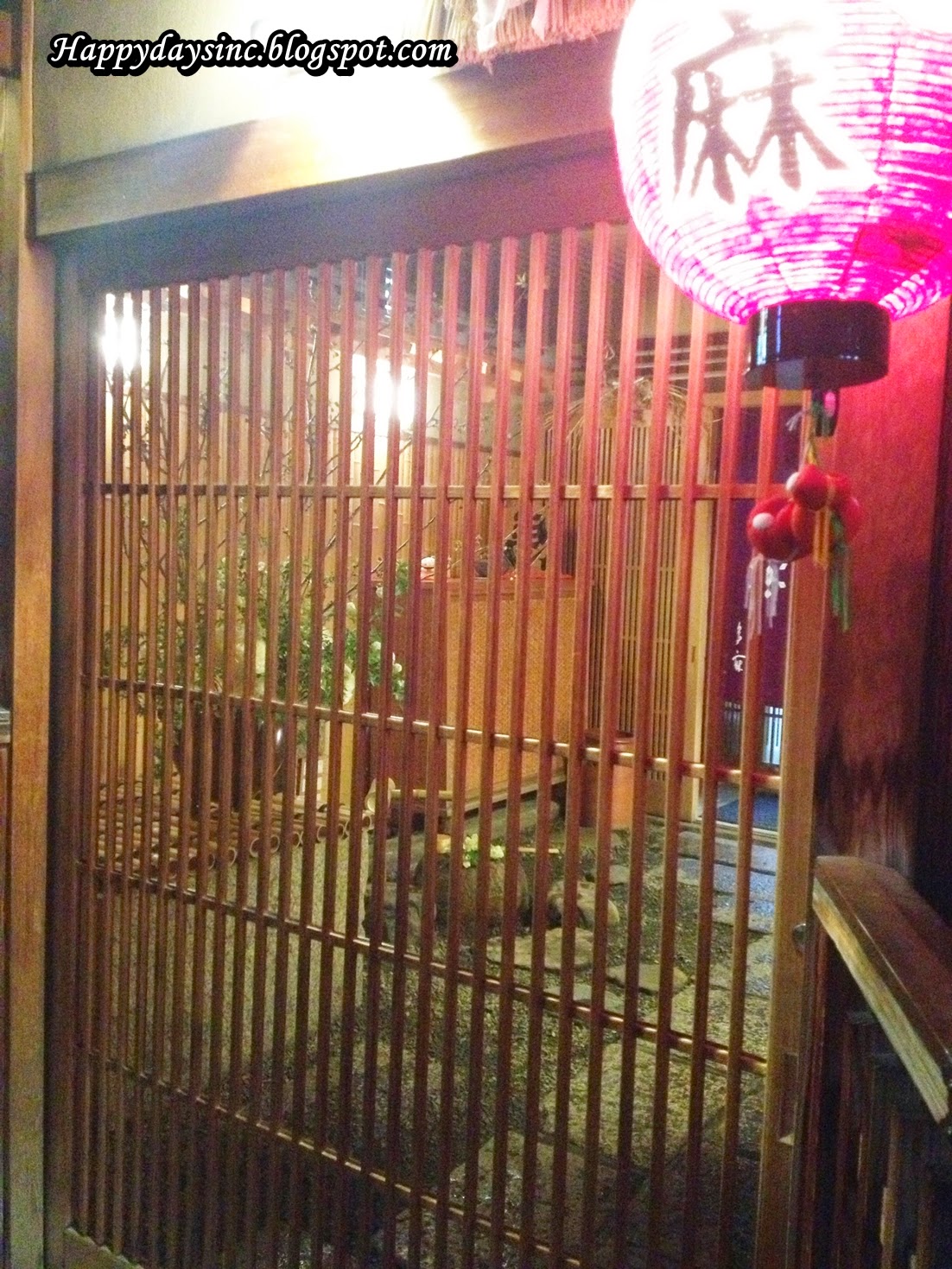 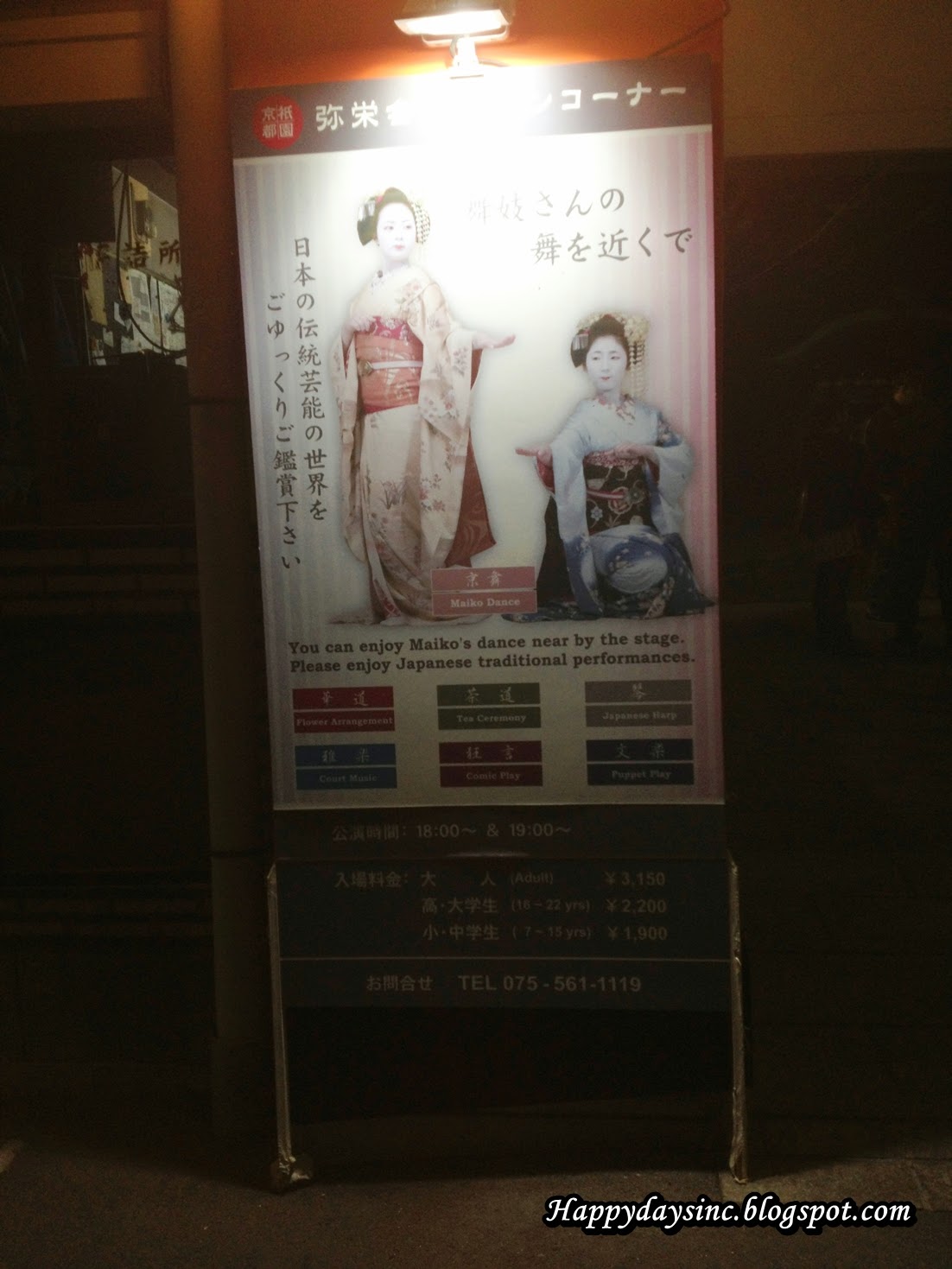 We collected our bicycles, finding that to our delight, that parking was free. However Cousin got the fright of his life when he found a warning notice on his bike. After sending Sister and Friend ahead to return to the hostel first, we asked the nearby restaurant about what to do with the notice, fearing it was a fine ticket and the waitress merely ripped up the notice, giving Cousin a momentarily heart attack. She quickly assured us that it was fine. I am guessing she got this a lot.

Anyway, we walked our bicycles all the way back to hostel, taking a hour or so and found a petrol station along the way. The attendant was kind enough to help Cousin pump up the tyre and we were on wheels again!

For about three minutes because we reached the hostel by then. It was then I discovered that I had lost the key to my bike lock. Talk about an evening of bad luck! However the hostel girl was very nice and assured me that they would just duplicate the key as long as the lock was still attached. Phew! 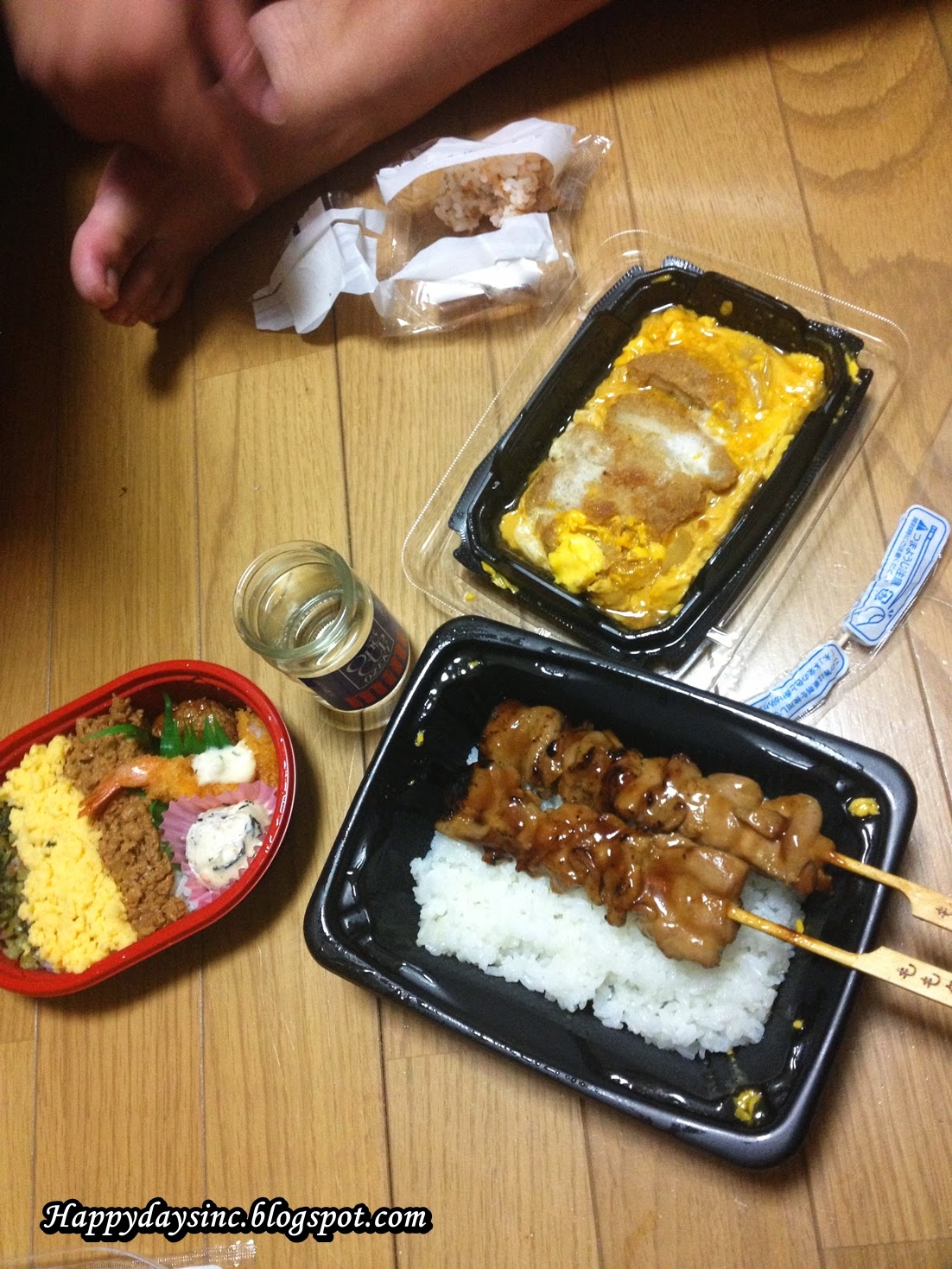 We retired to our room and spent the rest of the night trying on our purchases and feasting on pre-prepared meals from Family Mart. This day was definitely one of the more memorable part of my entire trip. 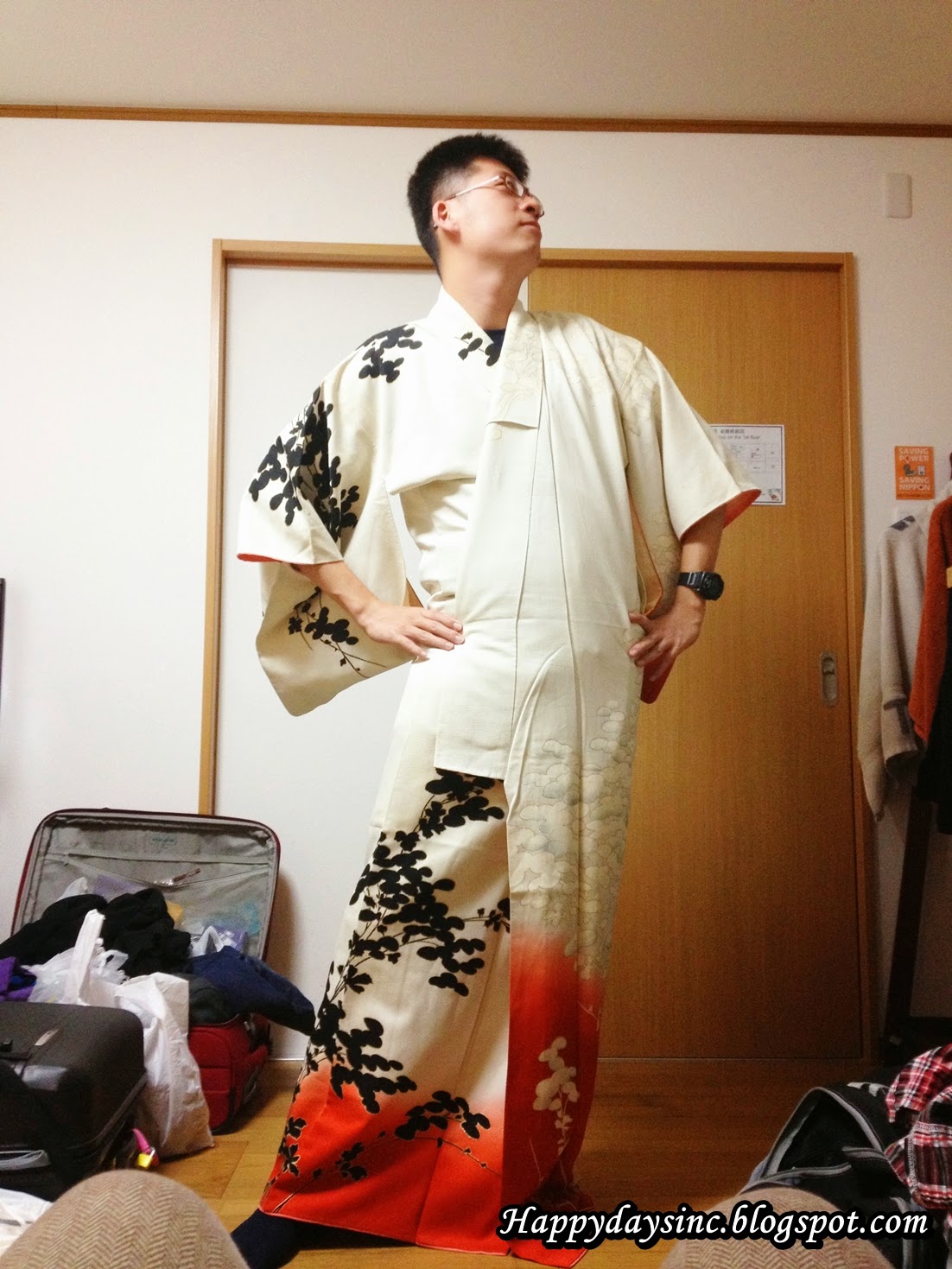 Day 5 post on a rainy day in Arashiyama coming soon.

You can certainly see your enthusiasm within the work you write.
The arena hopes for even more passionate writers such as you who
are not afraid to say how they believe. All the time go after your heart.

Thanks! Comments like yours keeps me motivated to keep documenting my travel adventures!