In the months leading up to the Gold Coast trip, whale-watching had been on the table as one of the must-do activities. However after scanning for a Groupon deal and further research, I opted out whale-watching in favour of....alpacas. Well, alpacas and a visit to Currumbin Wildlife Sanctuary 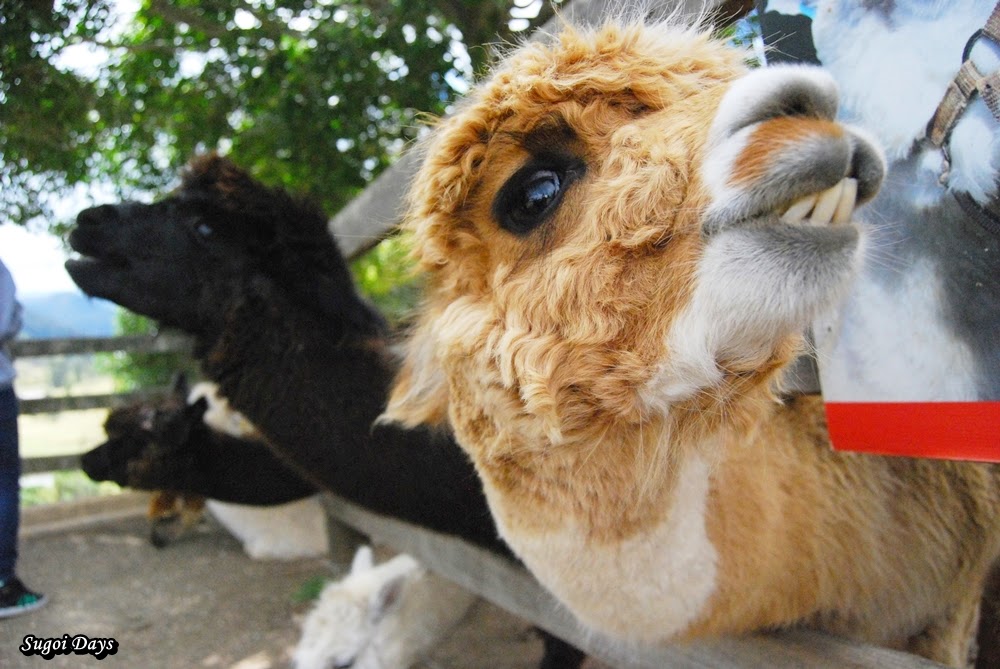 Despite being semi-crippled, sunburnt and bruised from Spartan Beast the prior day, I was determined to follow through with my day plans for our third day in Gold Coast. My sister was a huge lover of alpacas (god knows why) and I decided to make a visit to the Mountview Alpaca Farm, a hour and a half drive from Gold Coast. Getting to the area went smoothly thanks to Waze that took us over Mount Nathan and into Canungra. 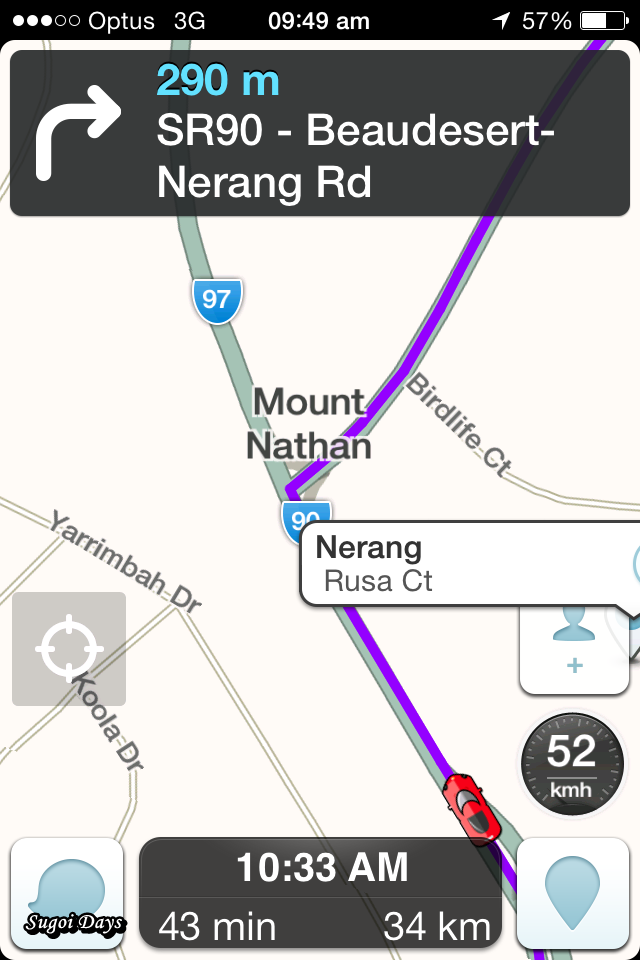 Finding the exact location of the farm however was a tricky one, no thanks to Waze. In all fairness, our phone lines and data plans lost collectivity around a nice house up a hill and the home owner was more than happy to point us in the right direction which was to just keep going up the hillside. I reckon she gets asked for directions quite often. 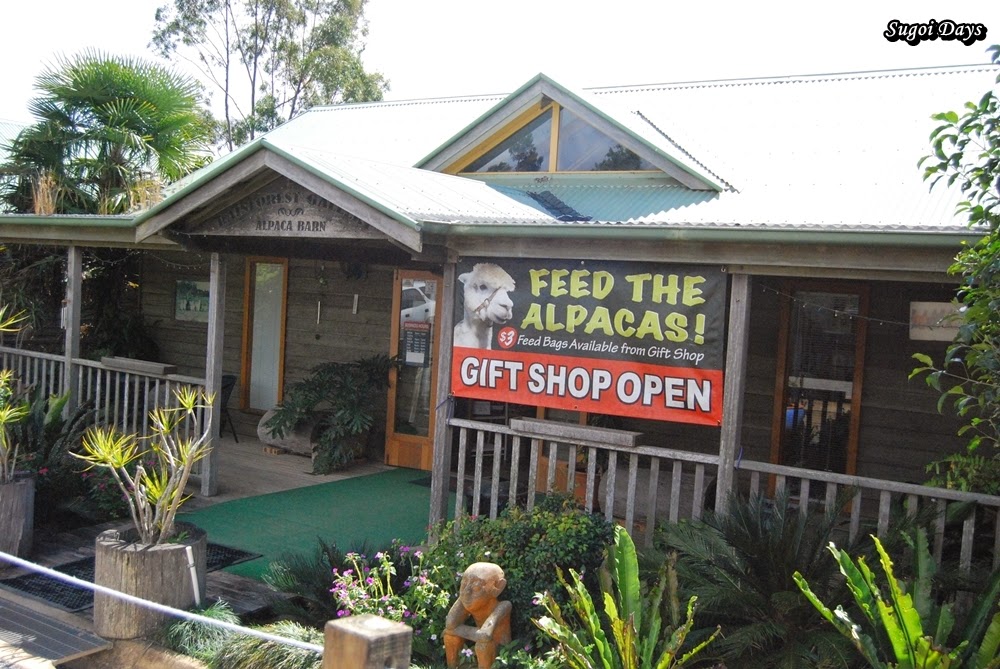 Anyway, another half an hour drive up and the joyous sight of the alpaca farm soon came into view. It can't be missed from the road, with a huge sign and instant view of its main attractions. When we were there, there was already a group of Korean tourists feeding the alpacas, making it easy for us to get up close and personal. But we wanted our own feeding experience so we ventured into the shop-slash-cafe-slash-homestay, got distracted by the amazing view of the hills behind and bought some alpaca food for only $3. 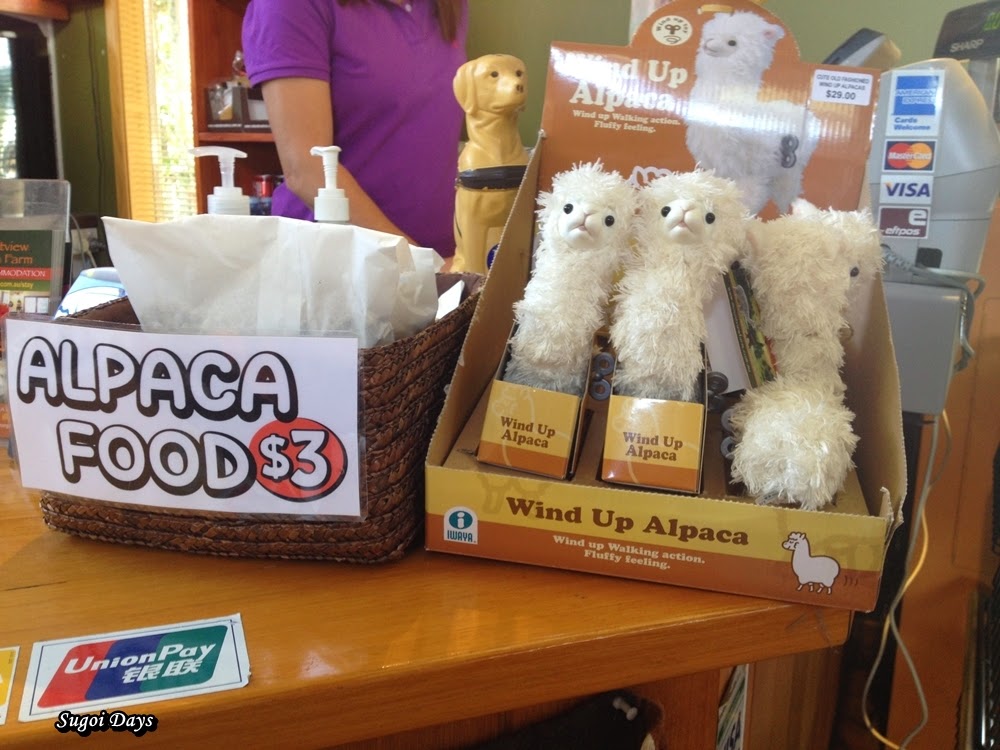 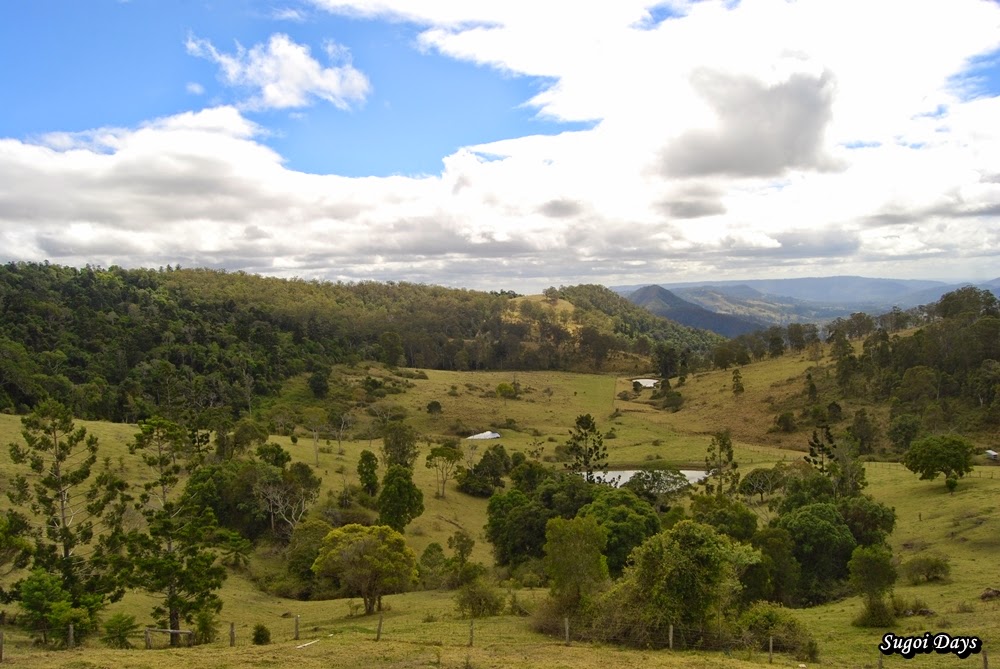 The alpacas were friendly and clearly very used to being spoiled by visitors. Careful though as they might sneeze on you. We spent half an hour there before we departed back for Gold Coast. Had we more time, we would have opted to spend the day in Canungra, exploring the local nature's treasure. 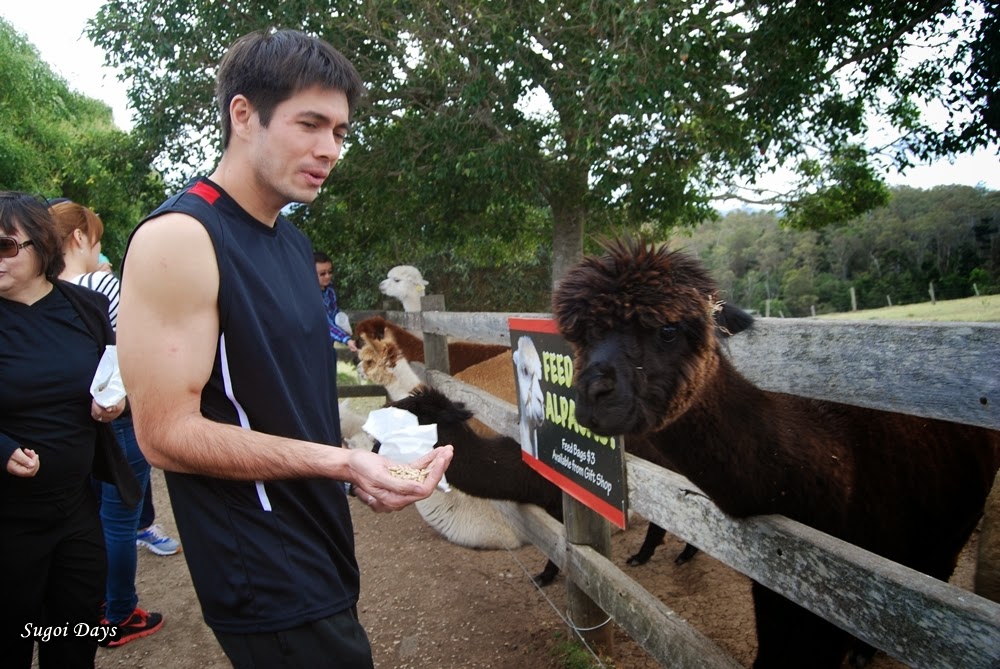 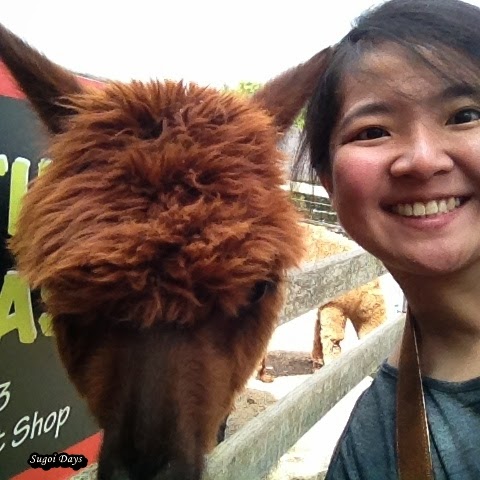 After a quick break back at the apartments, we headed to Currumbin Wildlife Sanctuary, a 10 minutes drive from the airport and our apartments. There was ample free parking provided and a public bus runs pass the area throughout the day, making it a popular attraction for local and international tourists. We had scored Groupon vouchers to Currumbin Wildlife Sanctuary for only $20 per person. The original price for a general admission was $49. 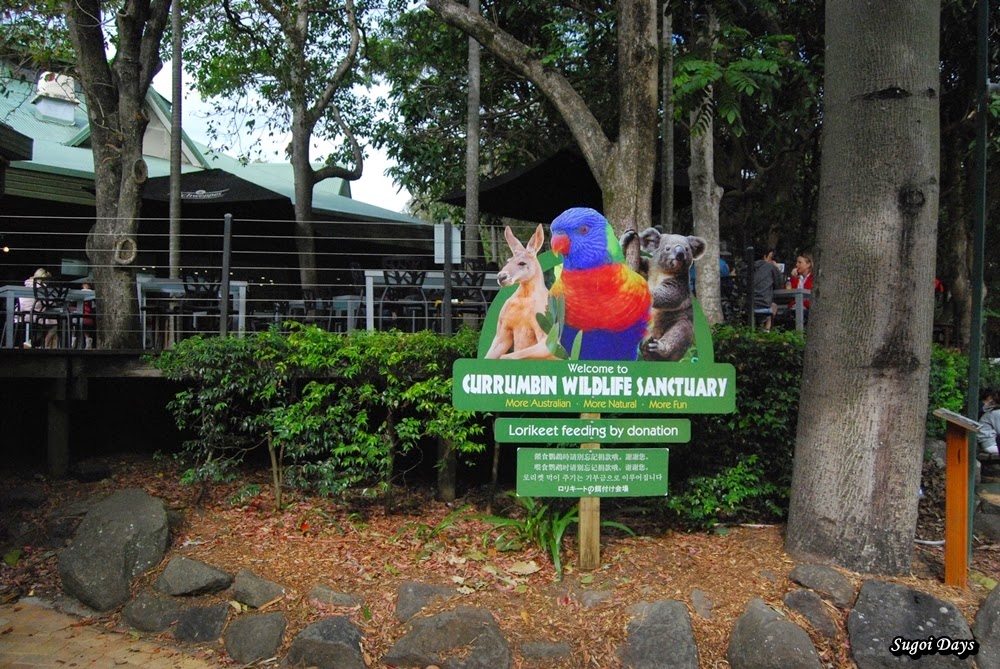 Because it was a hour or two before closing time on a weekday, there was very few people there. We were probably the biggest group there. The moment we entered, we immediately saw the main attraction, the koala bears. 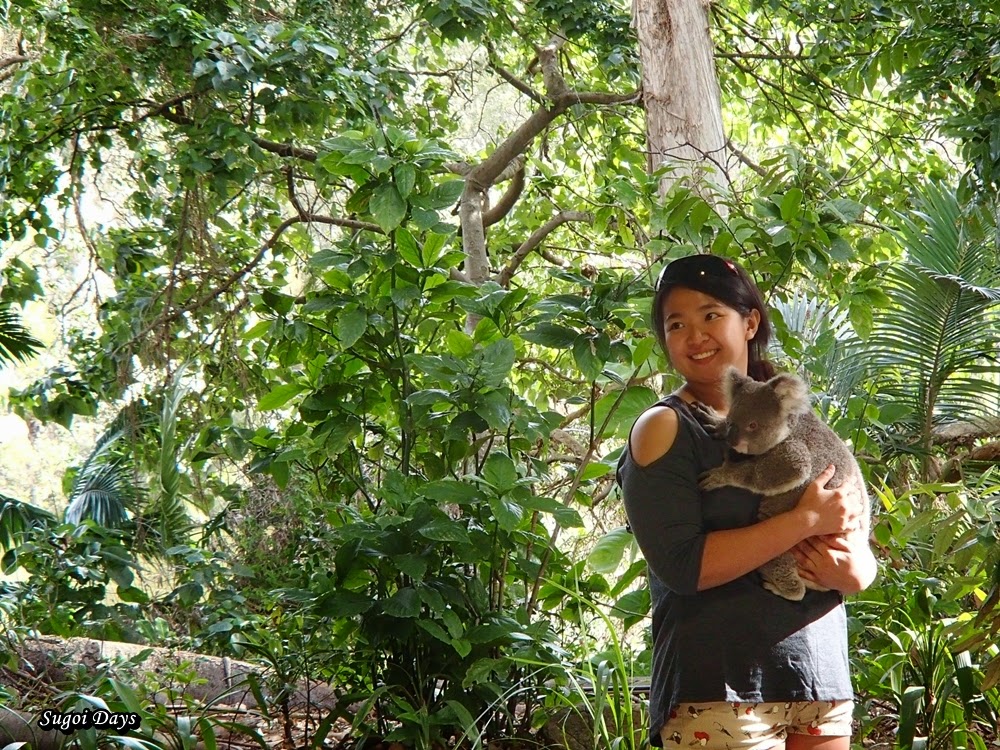 I couldn't resist a photo opportunity with one of those furry bears (and their long sharp claws) and thankfully there was no queue. I handed over my $20 and got to carry a two year old female koala. Her fur wasn't as soft as expected, more rugged and thick than anything else. I was told that my complimentary photo printout would be ready for collection in a hour and with that, I hurried after my friends. 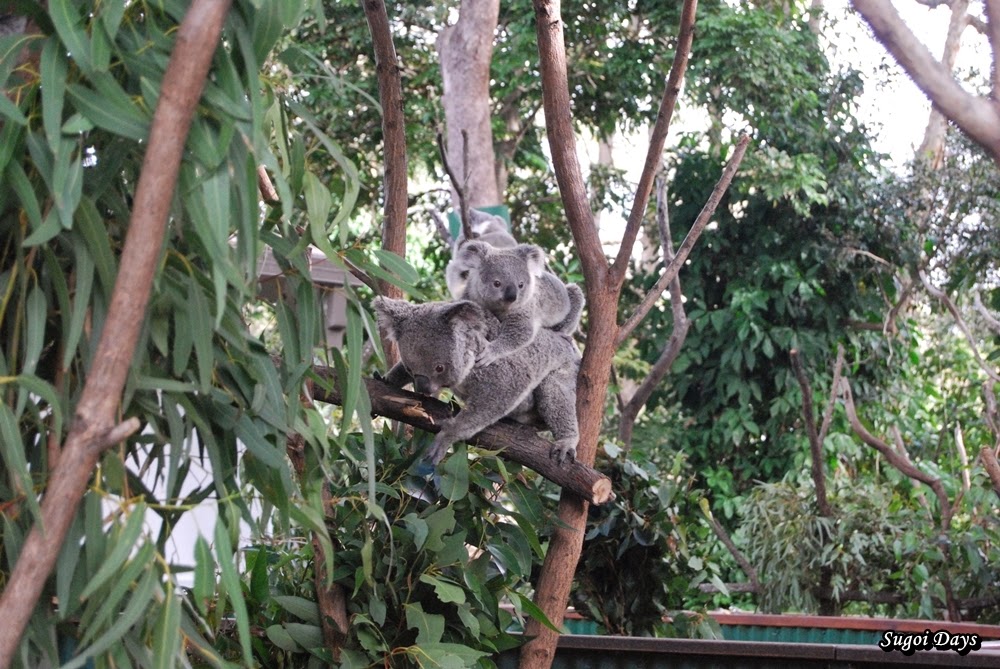 Currumbin was huge and definitely not a place you can cover in two hours. It was feeding time when we came and the koalas and their babies were out and about for food. We saw the supposed quarantined quokka otherwise known as the happiest animal in the world due to its smiley face. It was also feeding time for the dingoes and we got to see how well-trained these once-wild dogs are. 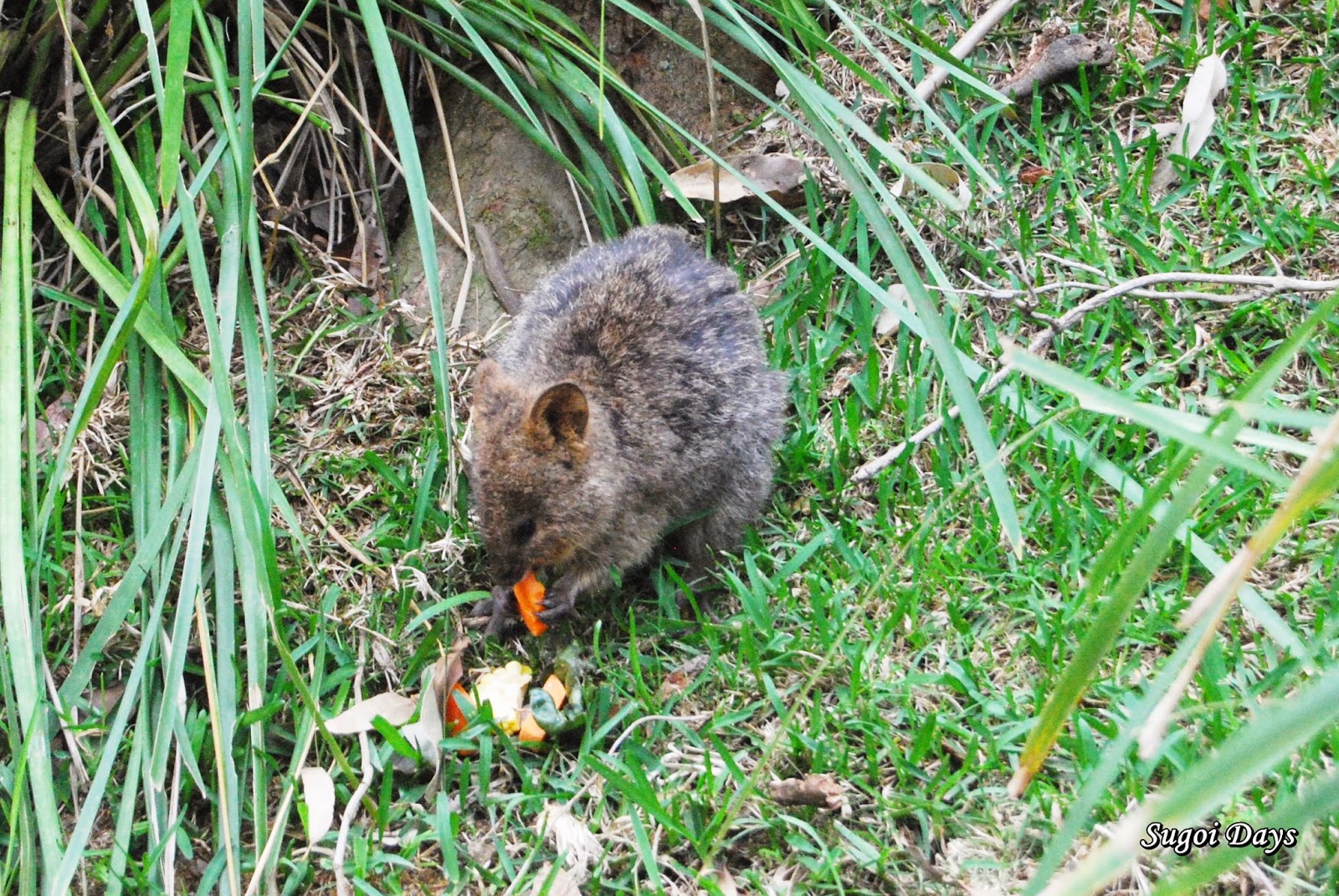 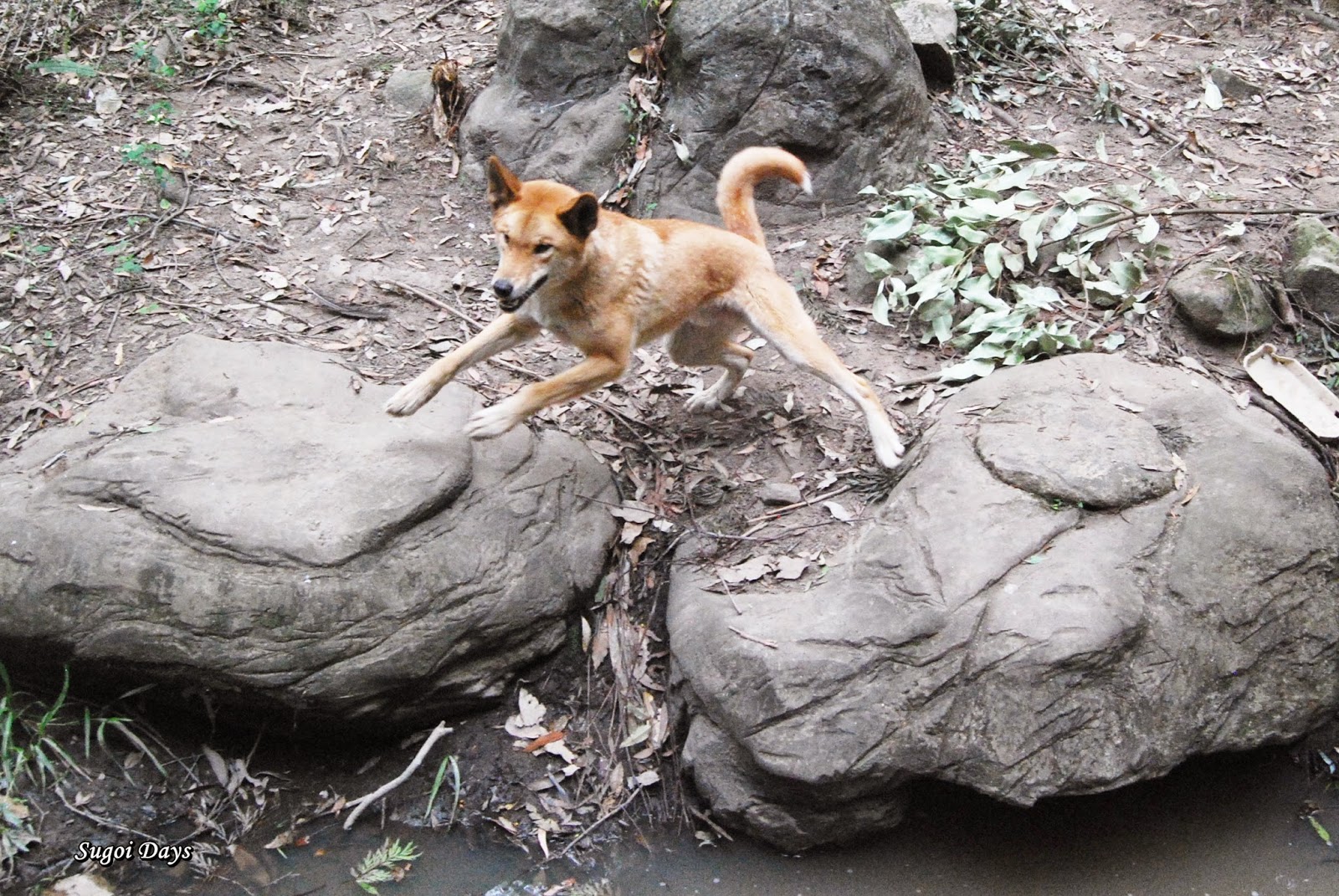 We also ventured into the kangaroo enclosure where the animals could roam freely and be fed by tourists. This of course led to many questionable poses and photos. 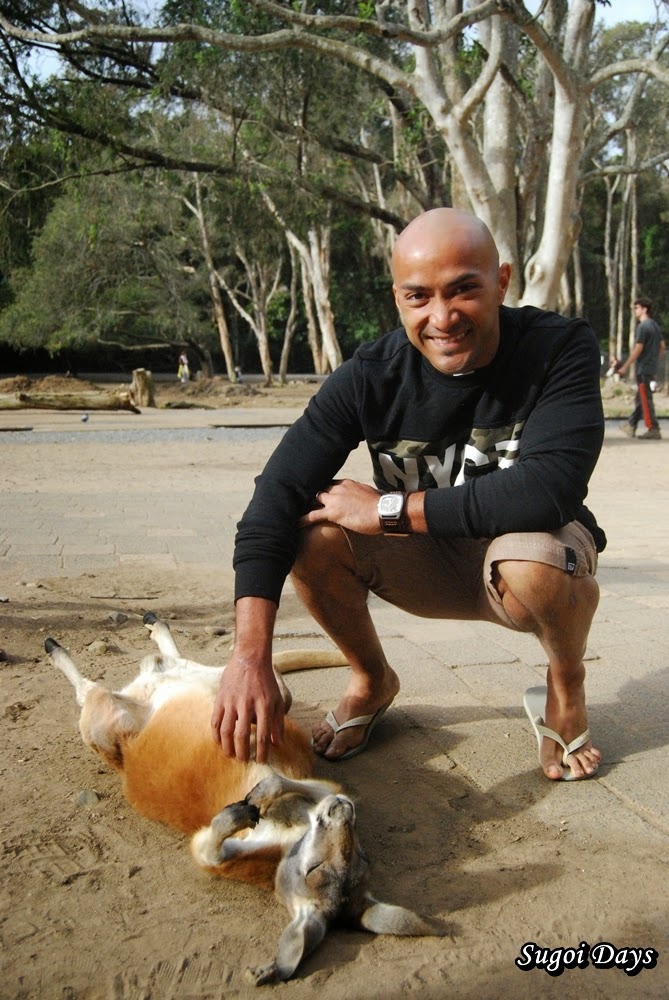 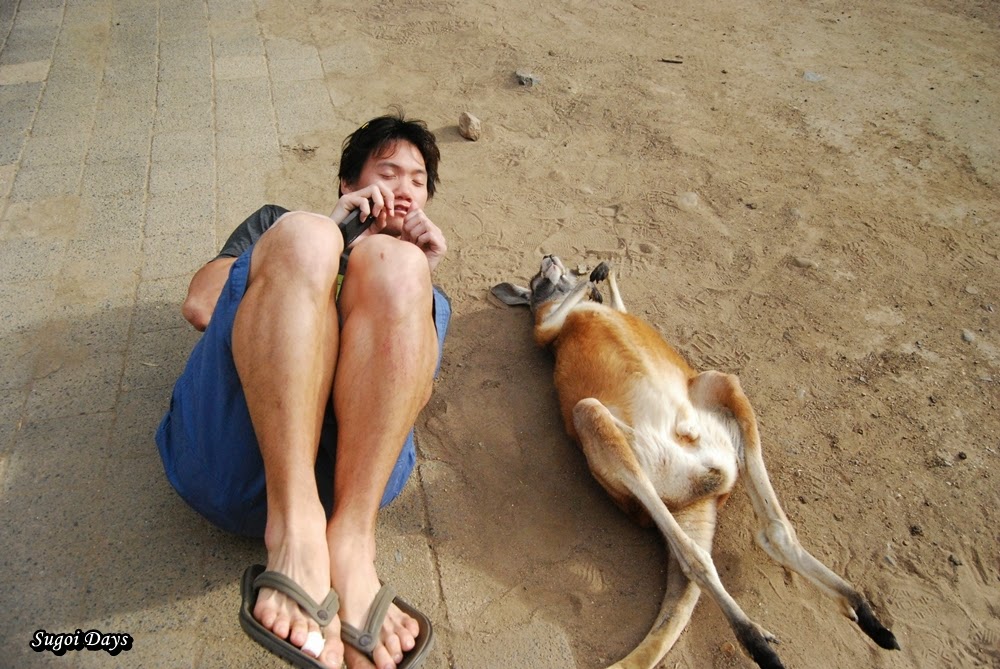 At closing time, it started to pour heavily and to worsen it, our tummies were grumbling. After much debate, we headed into Surfers Paradise for dinner. Parking our 12-seater van was challenge as we could not park it indoors due to its height and in the end, we parked along the street and had to run as the rain soaked us to the bone. 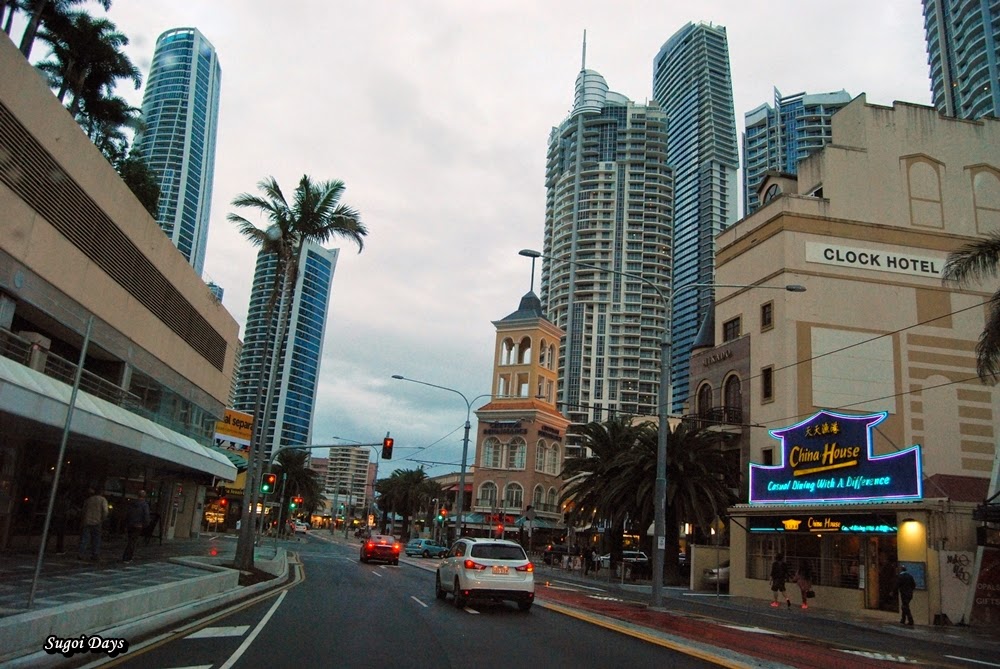 To make up for our miserable state, we treated ourselves to Hog's Breath on a friend's recommendation (the only recommendation he got right for the whole trip). Reservations are recommended here but if you are early enough, you can get a place easily. Hog's Breath was the type of place you could walk in without dressing up or from the rain. Service was on the slow end but when the waiter took our orders, he was careful to repeat them. 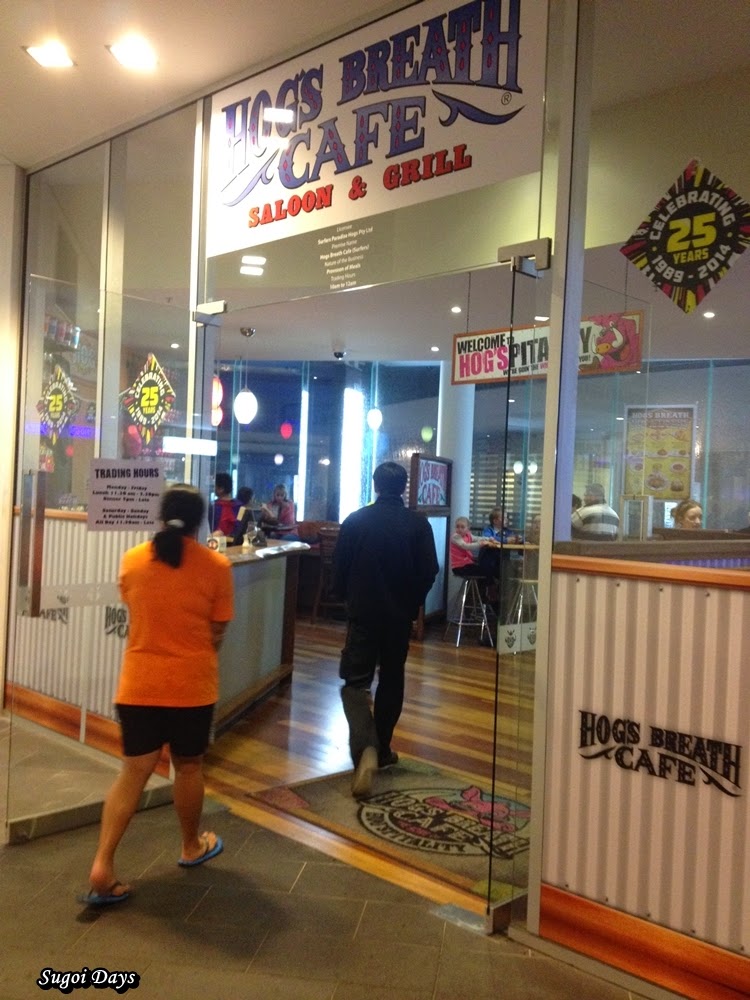 The food was undoubtedly awesome, dare I say better even than Hurricane's. Their specialty was their prime rib and we were spoiled for choice on what to order it with. Mine was the garlic mushroom prime rib and the garlicy mushroom butter blended nicely with the succulent red meat. I had ordered the lite cut ($26.95) (traditional cut was $33.95) which left enough space in my tummy for dessert. 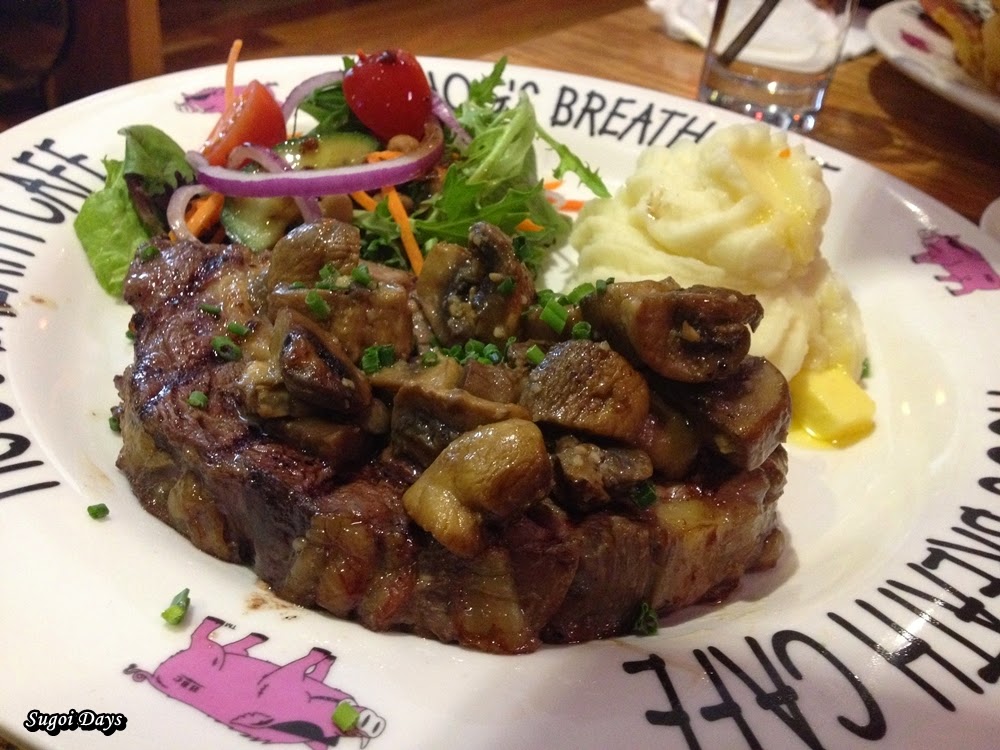 To think I almost didn't order their special Mississippi Mud Cake ($8.85) but I was glad my friend persuaded me to because it was divine. The warmth of the mud cake drizzled with hot chocolate sauce and ice-cream was to die for. It was so good that...I didn't get to snap a picture before it was all gone.

After dinner, we dropped off the gang back at the apartments and my friend and I headed back to Coolangatta airport to return the goddamn 12-seat behemouth of a van. Fine, I admit, we gave it a much cherished farewell before dropping off the keys at Europcar. But our grief barely lasted a minute because in no time at all, I was running around my brand new (rented) Hyundai 120 5DR ride. 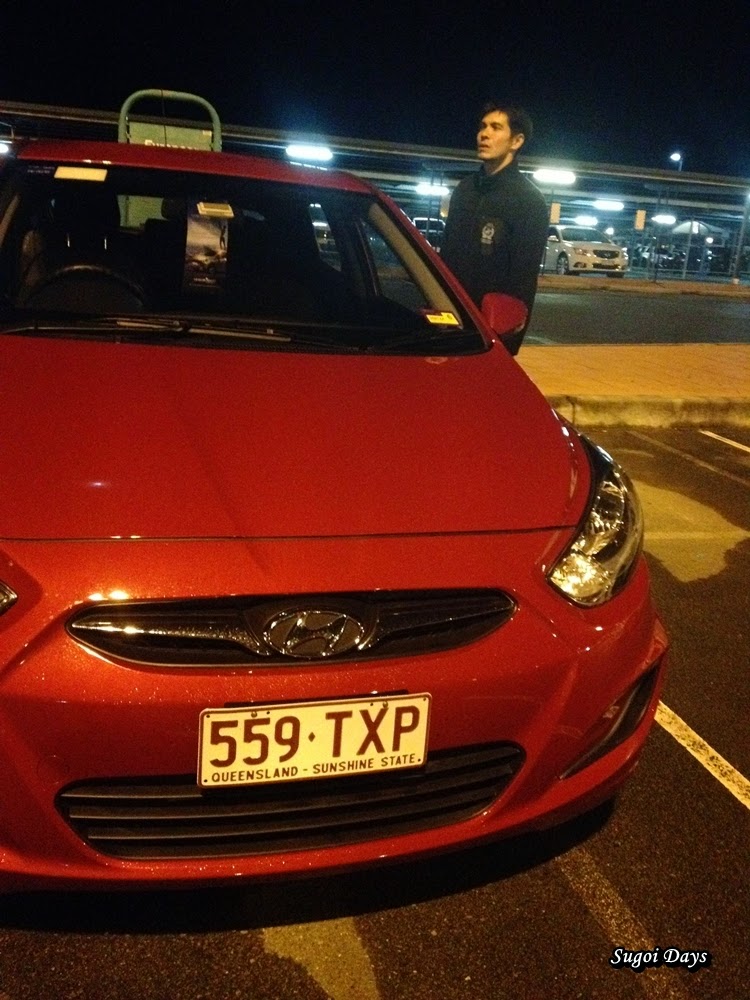 It came in red too and everything was in pristine condition. This was my car for remaining few days in Gold Coast and also...the first one I ever rented abroad. I wasn't even sure that my license was accepted in Australia. Anyway, everything ended fine and dandy that day. I even found the covered parking lot of our apartments which meant that good ol' Red didn't need to stay out in the open.

Because the next day, she (yes, she. I decided my car was a she) was going to take us to Wet and Wild and Movie World!