AirAsia has produced #AirAsiaMAKNA t-shirts - a new, limited edition designed t-shirts to raise funds for the National Cancer Council of Malaysia (MAKNA), retailing at RM30 each. The t-shirts are available for males and females in adult and children sizes. 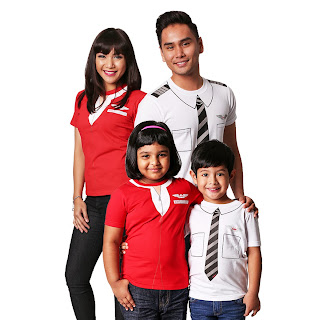 Designed and produced internally by AirAsia Allstars (employees), the t-shirts feature the iconic AirAsia Captain and cabin crew uniform, which carries the MAKNA logo and its tagline ‘A Meaning To Life’ at the back of the t-shirts; sending a message of positivity as part of the CSR campaign.
The #AirAsiaMAKNA t-shirts are available for purchase at the venues below:

The sales of t-shirts for this campaign is purposely designed as on-ground events, where both AirAsia and MAKNA can join hands to create awareness towards cancer through information disseminated at all of the event venues.

AirAsia is also running a photo contest in conjunction with this campaign. Everyone who purchased the exclusive t-shirts are eligible to win a pair of flights to selected AirAsia or AirAsia X destinations, just by uploading the most creative photo of themselves in the t-shirts on Twitter or Instagram and hashtag #AirAsiaMAKNA. Winners will be notified by AirAsia at the end of the campaign period at the end of June.