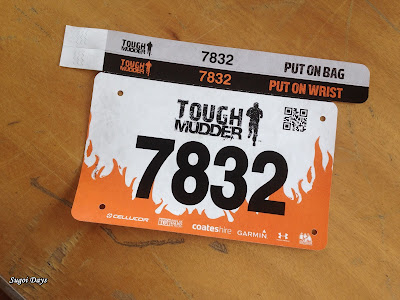 So anyway, a week after Spartan Stadium in Sydney, I flew to Melbourne to take part in Tough Mudder which took place in Broadford State Motorcycle Complex. An hour's drive to the race site consisted of driving within the speed limit, slowing down at speed traps and praying for a sunny day out. The last time I did an obstacle course in Melbourne, I nearly froze to death.
But when we arrived at the bustling complex, the sun was out and the crowd's excitement was infectious. We were eager to get out there as soon as possible so we ditched our stuff at the bag drop and joined the next wave heading out. I wore my trusty Inov8 RocLite 280 with its solid grip that helped me scale even mud. 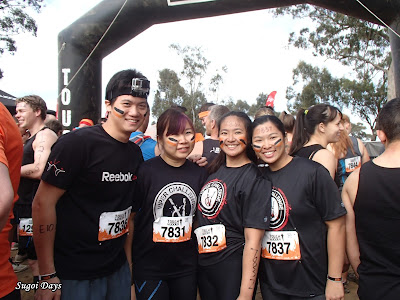 Despite loosing the beats of Eminem's Loose Yourself, the Tough Mudder pledge never fails to get the crowd revved up. While we were all eager to hit the course, Tough Mudder always reminds us to look out for our friends and everyone around us, emphasizing teamwork and camaraderie above our course performance. Unlike Spartan, there was no penalty for failing an obstacle or walking pass it. 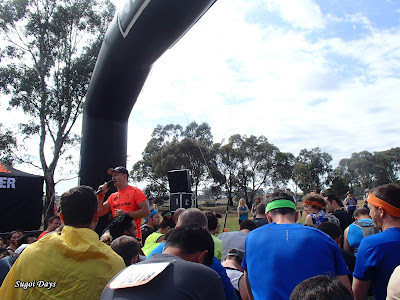 As soon as we were flagged off, we hit the course running....uphill. Hills quickly began an apparent theme of this Tough Mudder. Rolling hills, steep hills, muddy hills and hills with participating slowly trudge up it like ants. So many hills that it made Spartan Beast at Lake Dewar look like a airplane runway. But Mr Sunshine kept his ray on us with a few gust of cold winds now and then, making the course a lovely one to run on the downhill and on the flats (and walk on the uphill) 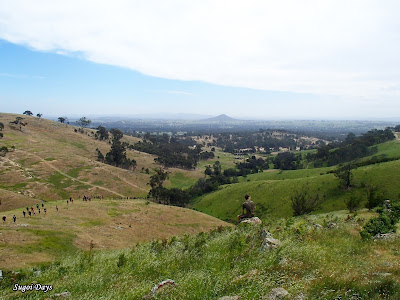 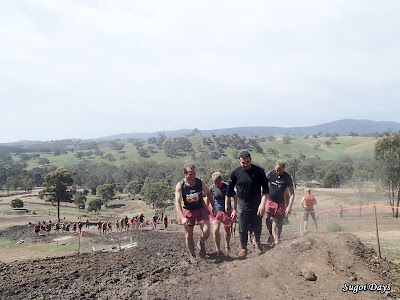 Tough Mudder promised us new obstacles as well as improved versions of old favourites and indeed they lived up to that promise. Arctic Enema for instance was revised to keep participants from jumping into the container. Instead, we had to slid into the freezing icy water below, waddle to the middle, duck under a divider and pull ourselves out from the other side, stiff limbs and all. Thankfully when I got there, the ice cubes had melted and it wasn't as compressed or as cold as the first time I did it where I was stuck in the container for a minute. When you are in ice, a minute is a long time. 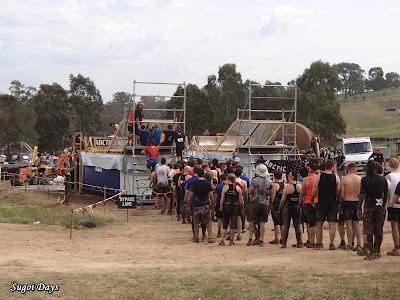 The beauty of Tough Mudder was that its obstacles weren't only physically demanding. Some of them also required mental strength. Cry Baby mentally screwed with us by making us believe we were going to come out on the other end brawling our eyeballs out. The warning signs before it also didn't help. But once we were inside, it was cooling, foggy and minty. We came out smiling and repeatedly saying that it wasn't so bad. 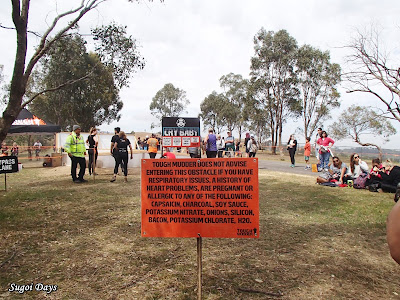 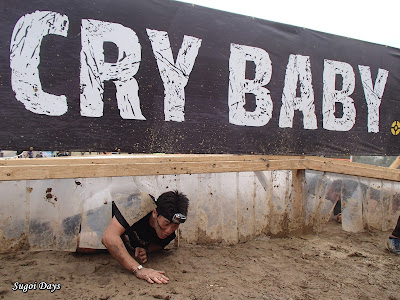 King of Swingers and Leap of Faith were fun. Just getting to jump off a platform into a pool of water and washing off the mud in the progress was heaps of fun. Sadly it also meant we failed the obstacles because we were too short. King of Swingers required us to grab a swing handle and tap the bell at the end before plunging into the pool. I fell short of the handle. Leap of Faith needed us to jump from the platform and grab the hanging nets to climb up. Once again, I fell short. Short seemed to be disadvantage here.... 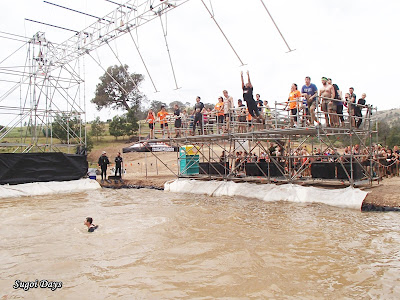 However being short and small in size (relatively) helped with the Birth Canal. It required us to crawl through a tunnel with water weighing down on us from above. Being smaller helped me shimmer pass it easily while those taller and bigger peeps felt the full weight of the water on their backs. 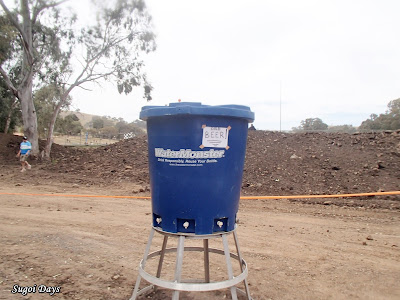 Water stops were every 5km or so and placed at strategic points throughout the course. Some offered banana and oranges and some had protein drinks to keep us going. Beer signs were a constant reminder of the reward that awaited us at the finish line. Humour signs kept our spirits up and entertained. 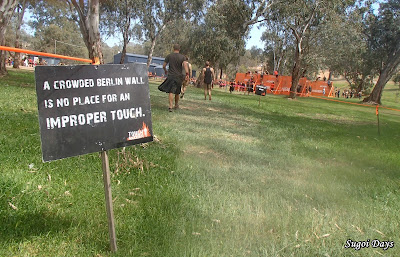 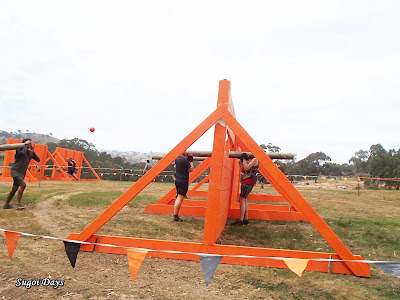 Tough Mudder was all about helping one another and I saw plenty of that at the obstacles. This year, obstacles were specifically designed to make participants help one another. The Pyramid Scheme, Mud Mile 2.0 and Everest were impossible to do without the help of my friends, the Tough Mudder volunteers and random people. To see those hands reaching out so selflessly was just heartwarming and to be one of those hands was incredibly rewarding. 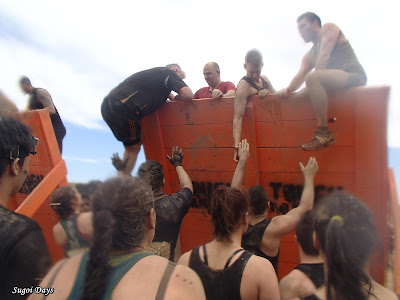 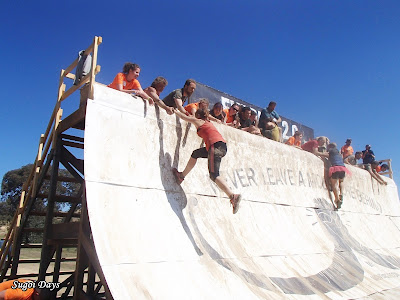 Volunteers and medical aids were readily available throughout the course but it didn't mean one should leave common sense behind. One friend almost drowned at the Funky Monday 2.0 and my sister had to leap into the pool to save her, despite telling the volunteer and lifeguard. 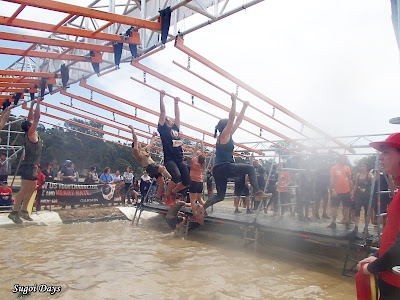 Since 2014, Tough Mudder has taken it up a notch to reward returning Tough Mudders by declaring them legionnaires of Mudder Legion and as a reward, we get an additional special obstacle. It was very Ninja Warrior like. I gave it my best shot but didn't make it past the third rung. 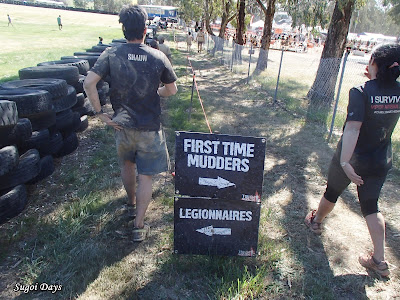 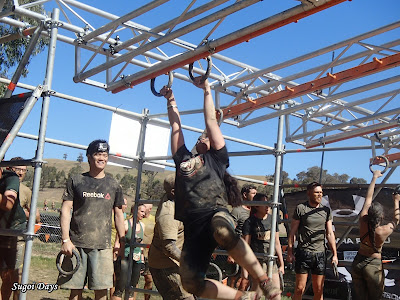 At the final obstacle, the iconic Electroshock Therapy, a crowd had formed for fear of the live wires dangling from above. The emcee was there, cheering on participants with sarcastic and funny quips. After steeling our nerves, we dove in. Each hit was like a sudden poke and jolt. It wasn't as bad as my first but it was certainly no fun either with a muddy ground and hay in the way. I ran with my hands in front of my face and lost my shoe in the deep mud. I turned back to wrench it free and with one shoe in hand, my camera in the other, I kept moving and nearly fell again. My camera broke my fall and I was left, staring at a mudcaked camera at the finish line. No amount of water could wash off the mud when it was damp. 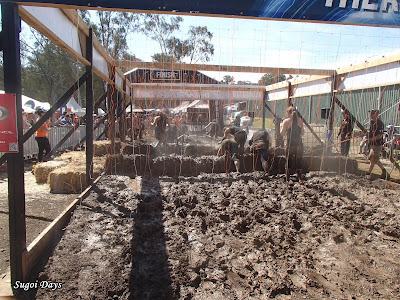 And just like that, in 5 hours 15 minutes, we were done. We were given our orange headbands and finisher shirts before retreating to the bag drop and showers. Once we were somewhat mud-free, it was photo and eating time! Everything tasted nice after the race and my friend and I claimed our green headbands from the Mudder legion tents. 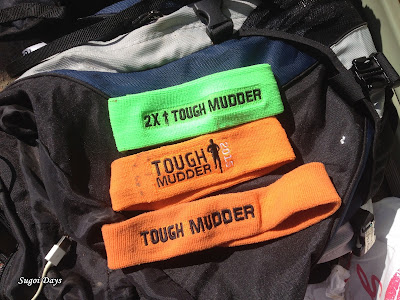 It was a colourful arena of colorful headhands and one guy even asked me how was the second time compared to the first. I cursed the hill but praised the obstacles for the effort made. This was why Mudders return - for the obstacles and for the camaraderie. 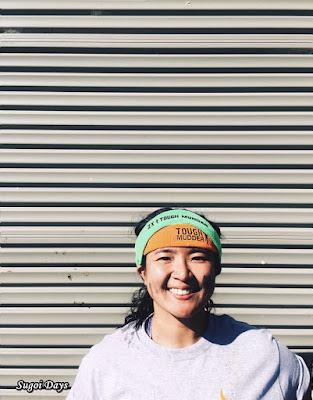 Tough Mudder, I will be back and I will get that blue headband.
Posted by Tania at 11:30 PM