Finding a reasonable place to stay on Sentosa island, Singapore is near impossible. I say near impossible because I or rather my mother found a freakishly reasonable hotel called Costa Sands Resort. If you're expected a rundown dodgy hotel with loose windows, cobwebs in the ceilings with an eerie silence, you couldn't be more wrong. Although not at its prime, Costa Sands offers all the facilities needed for an enjoyable restful stay on the island. 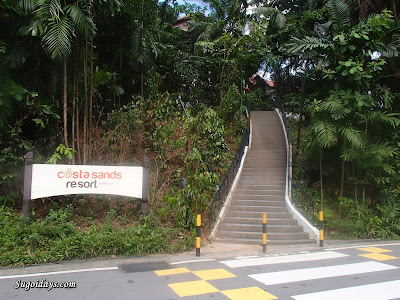 Costa Sands is located on the hillside above Siloso beach with a staircase leading straight to the beach road and the row of restaurants located at the seaside. Being placed on the hillside amidst a jungle and a trail gave it a lovely hideaway, back-to-nature concept especially with its Kampung Hut chalets. 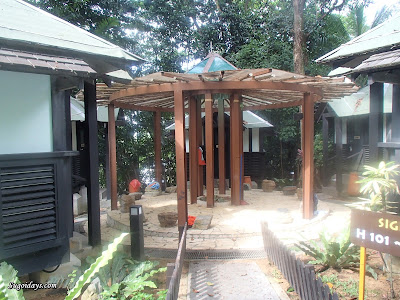 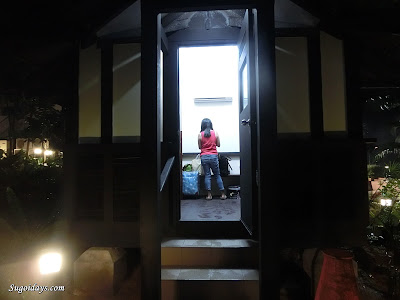 Because I was on Sentosa for an OCR, Viper Challenge, I had opted for the dormitory-style Kampung Hut to stay at for the weekend. It came with two bunk beds with a max occupancy of four, storage space and a powerful aircon. 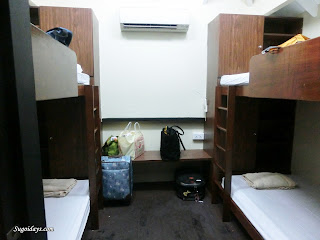 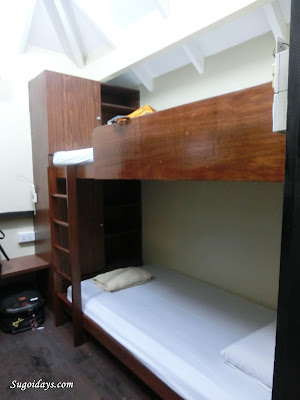 There are three areas of Kampung Huts chalets, each consisting of five huts. 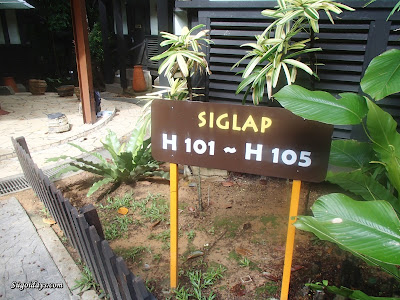 The toilets and showers were shared and located outside. The swimming pool area also had toilet and shower facilities so if you're located at the Siglap huts, you have two options of facilities to pick from. The resort also offers a washing machine and dryer near the toilets. 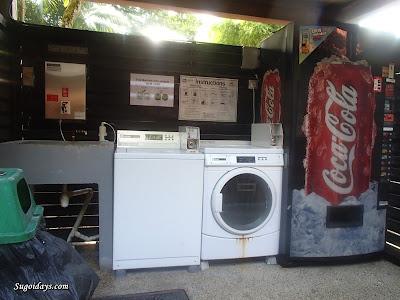 The BBQ pits are quite popular with big parties as there was enough space for three groups to have their BBQ parties at once.  When I was there, the pits were used every night by young college kids and also families. The resort charges a fee for the use of the pits which can be used from 5pm to 1am. Thankfully, my chalet was somewhat soundproof as the wooden structure kept out the noise from both parties. Occasionally, the resort would also be visited by the local peacock that also doubled as a 7pm alarm. 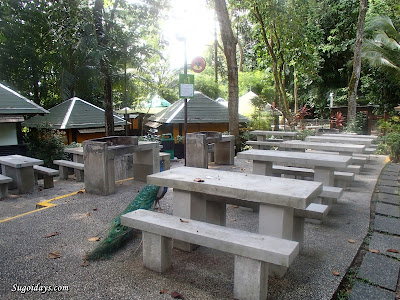 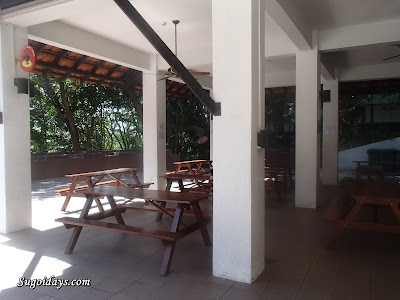 If the swimming pool doesn't do it for you, then enjoy the variety of nostalgic arcade games such as Para Para Revolution, Time Crisis 2 and so on by the poolside. They also had pool, foosball and carom games. These however go off at 9pm to avoid disturbing the occupants of the deluxe rooms located above and on the same floors. 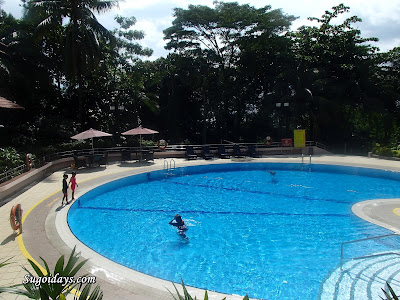 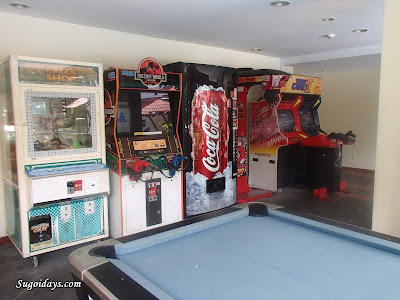 If you're staying in the deluxe room, request for one away from the arcade for an undisturbed rest. 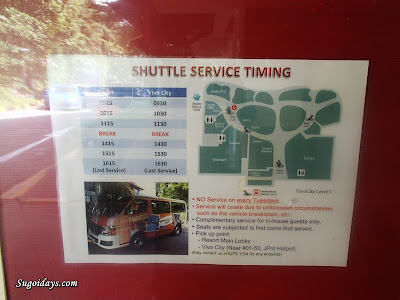 Getting to the resort can be a bit tricky but I later found out that they actually offered complimentary shuttle bus service to and forth to Vivocity mall. The resort is also a 10 minutes walk from Beach station near Palawan Beach which connects directly to Vivocity mall. One just needs to walk down the stairs near the pool, exiting the gate and head right until they see McDonalds and Beach Station. The gate is located automatically daily at 11pm and unlocked at 7am but can be opened upon request via intercom. 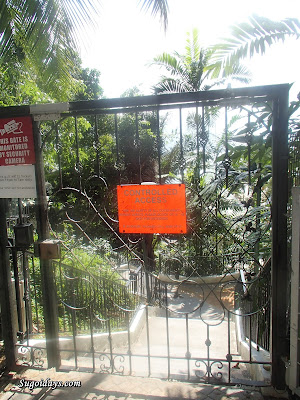 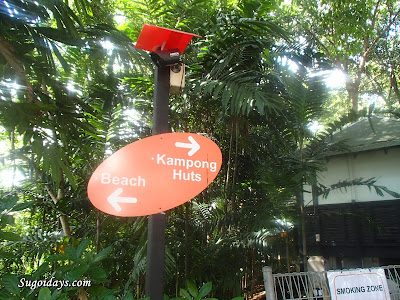 As for food and drinks, there is a restaurant at the resort and vending machines around the resort. Food wasn't really an issue for us as we kept venturing to the beachside in search of food and found Coastes. More on that later. 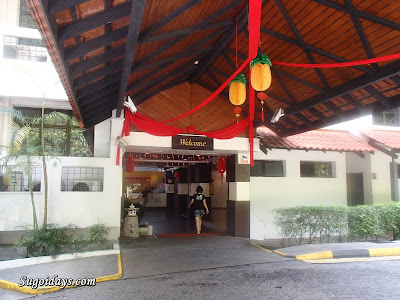 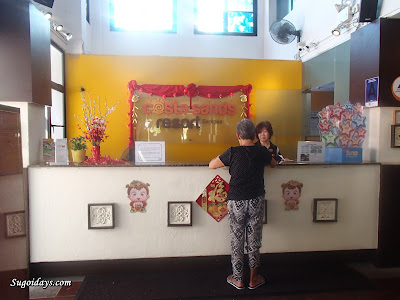 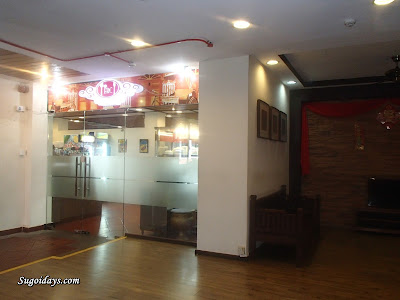 The Kampung Hut is approximately S$89 per night with a minimum stay of two nights. When shared among four people, it was actually cheaper than some hotels on mainland Singapore. While there has been negative reviews of this place, one just needs to adjust their perception of an hotel stay here to appreciate what it has to offer.

Given its location to the beaches, the party area and Beach Station (which gives you one way FOC access to Vivocity mall), I consider this place a steal for budget travelers wanting to enjoy the island life on Sentosa.

You won't find this place on Booking.com. To book, log on to http://www.dresort.com.sg/costa-sands-sentosa.
Posted by Tania at 9:54 AM

I love this place! Really enjoyed myself last night when I went there!

glad u did! shows u dont need an expensive place for a getaway!

Travel not to escape life, but travel life to escape us and enjoy the beautiful life moments under nature

At Queenstown, the holiday accommodations come under Luxury bedroom and they fully equipped with the self contained and ideal apartments for the visitors.
Spacious Bedroom

If perhaps you want to obtain a visa quickly for Vietnam, you must only go to the https://www.greenvisa.io visa service for this. I give you my word that you are likely to get your visa very quickly.