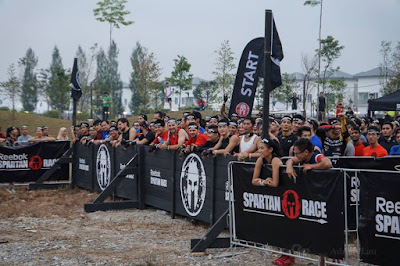 Well, there was one "Black River" but it was brown from...sewage waste. Gross. 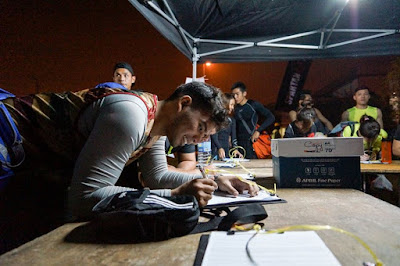 But I am really getting ahead of myself here. I was tackling my second Super race fresh off Malaysia's first Hurricane Heat and despite the anticipated equinox, I felt good about going into the race. Minus the slight  headache from inhaling the haze during Hurricane Heat. 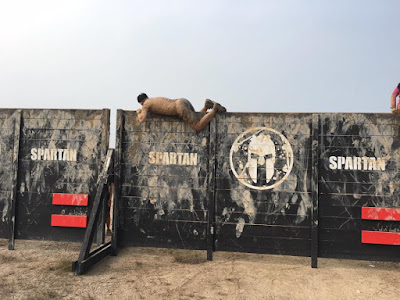 I signed my waiver form, collected my headband and after checking in my bag at the bag drop, headed into the race with my teammates. The first stretch of the course took us under the overhead obstacles and through puddles of toxic water that sent many of the participants to a screeching halt. 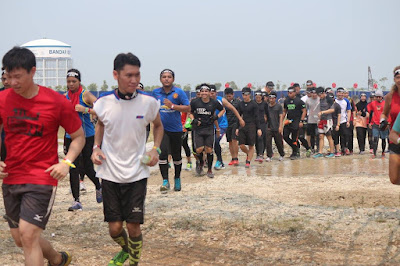 No, I jest but seriously. I came across a traffic jam at the start of the course because participants were afraid to get their shoes wet and were tiptoeing across the puddles. Clue eye roll. If a tiny puddle made them hesitate, the amount of ditches and drains they would have to jump over later would definitely slow them down. 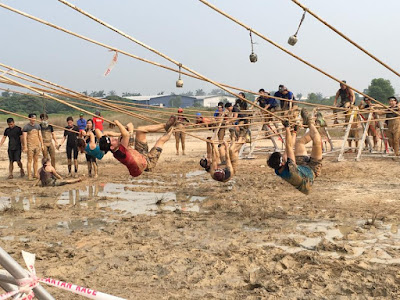 Due to the on-going construction, the course terrain was flat, lacking of hills and filled with rocky and uneven surfaces. Obstacles were a step up from what was offered in Spartan Race Sprint in Singapore last year with heavier weights and more mud. Much more mud.

The weighted obstacles were my favourites - weight drag, herculean hoist and sandbag carry. I opted for the men's weight for latter two and found them do-able. It irked me to no end when the participants (mostly men) at the hoist would just release the weight at the top and send it pummeling back down to the ground with a thud. I am also pretty sure that counts as a failed attempt by the Spartan Rules. Had this been in Australia, those guys would have been doing 30 burpees just for dropping the weights instead of letting it down slowly. 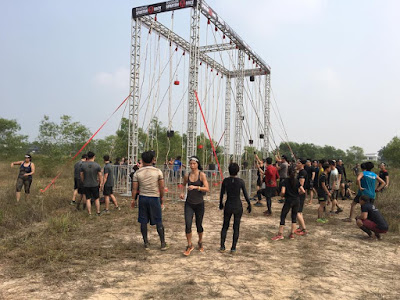 The tyre obstacles - flipping, dragging, rolling - came close to being my next favourite. After the rope climb. What was once the ban of my OCR journey was now become my favourite obstacle and a sure-guarantee to avoid the burpees penalty. 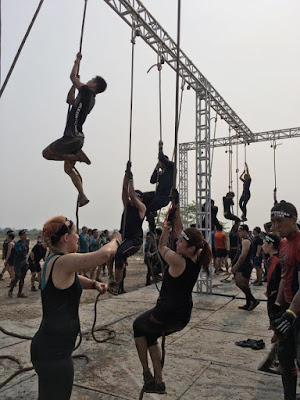 There were a considerable number of climbing and overhead obstacles which were a cause of queues and backlog. At one point, the overhead cargo net obstacle looked over overcrowded at the top. For two obstacles, I went straight for the 30 burpees to skip the queue. 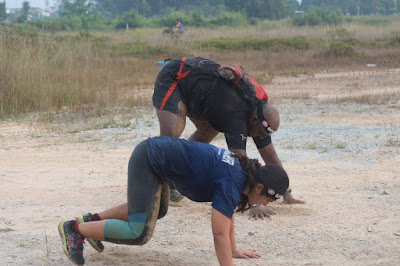 There were ample water stations in the course, serving water and energy drinks to racers in ice in cups no less. I was impressed with the efficiency of the volunteers at some of the stations - water and obstacles. Strict, commanding and abiding of the Spartan Rules. However, from what I heard of the afternoon wave, the afternoon heat was too much even for the poor volunteers. Many of them were solo at their station without water and shade. When it came for the morning shift to end, they were left out in the course without any direction. Considering how they were treated, I don't blame them for leaving their posts.

There was one particular challenge that no one expected to encounter throughout the course - the ditches and drains. Holy goodness, there were just so many ankle-turn, shoe-sucking muddy ditches for us to jump or climb in and out of. It was yet another cause of many many backlogs with participants proceeding with caution.

The equinox hit the event at noon and I was glad to be finishing by then, I did the fire jump as a team and we were through the finish line. After collecting our medals and the paper slip for our finisher shirt, we drank delicious coconut water while we queued for the photo booth. Never have I participated in a Spartan Race with an official finisher photo booth. 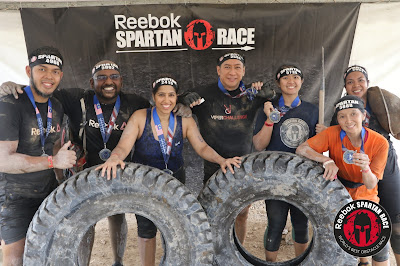 However, many racer encountered a bonus level obstacle in the form of the chaotic baggage drop. I waited 15 minutes to collect my bag and even then, my friend had to go into the baggage area to find it. As it turned out, I was one of the lucky ones. I saw pictures later of how the bags were laid out in the open for racers and just about anyone to take.

Spartan Race Super KL left much to be desired of an international obstacle race and with the Spartan Beast and a Sprint date announced to be on 9 October, there is still time for improvement for them. In comparison to their Australia counterparts which focused on bring more creative and challenging obstacles each year, the Malaysian version seemed more concentrated on breaking into the market and capturing the masses rather than focusing on delivering a stellar experience to the existing group of obstacle racers and Spartan fans already. This I foresee will be their downfall as once the whole of Malaysia has their "elusive" Trifecta, the masses will go back to picking their races based on pricing, goodie bags and racer entitlements.

Because let's face it. Malaysians are shallow in that sense.

Ps: due to my camera malfunctioning, I was unable to snap my own photos of the course. Photo credits to the official Spartan Race photographers and Chloe Chai.

Pss: To the marketing people at Olympus Malaysia, if you're reading this, I wouldn't mind receiving a new Tough camera for my OCR adventures. #justsaying

For the latest OCR and running events, check out my race guide here.

Fellow Malaysian Spartans, if you want to get in on the latest OCR news and training session, then join the United Spartans of Malaysia facebook group. It's formed by OCR-ers for OCR about OCR!
Posted by Tania at 12:55 PM