I had two primary parts of Tokyo to hit on my second day in the capital of Japan for the Tokyo Marathon: 1) Shinjuku to recce the startline and 2) Odaiba to collect my race kit and to see the Gundam statue. 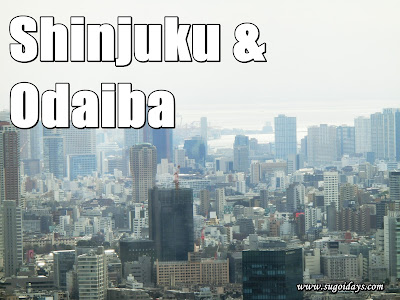 While the temptation to squeeze as much as I could into sightseeing was real, experience have told me that it would be suicide for my legs (and purse) so I planned and prioritised. Luckily my first stop was the Tokyo Metropolitan Government Building in Shinjuku, an observatory tower that stood at 243 meters and was free of charge to enter. 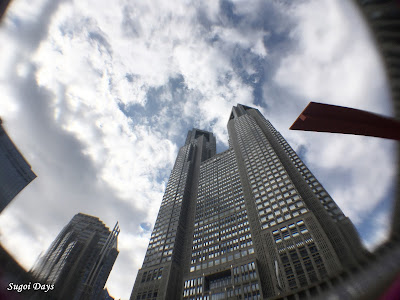 The building had two viewing decks in the North and South Towers and can easily be accessed by the lifts near the entrance. Security was tight though with visitors having to go through a bag check for safety reasons. The lift ride to the top was fast and in no time, I was at the top of the towers looking out at Tokyo. The view was spectacular, I think I even glimpsed the silhouette of Mount Fuji in the distance. 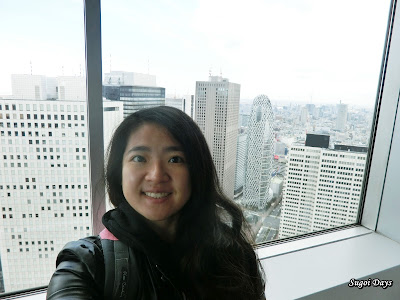 The North Tower offered free visitor guides in various languages and having a local's knowledge on the history and significance behind each landmark in the city, added a layer of appreciation for this beautiful metropolitan. 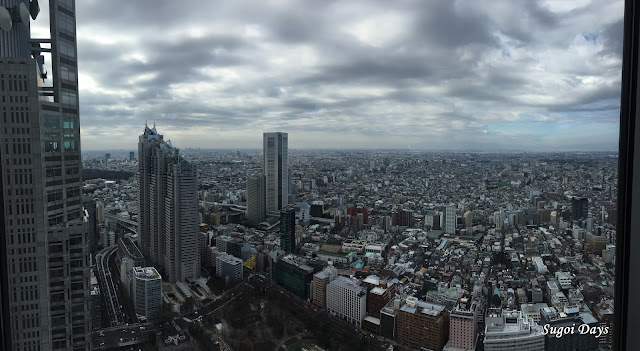 I initially thought of visiting the katana museum that was nearer to the observation decks but after reading up some reviews and recommendations, I opted for the Samurai museum instead. Following Google maps, I weaved my way through Kabukicho's streets and eventually found my way to this hidden jem. 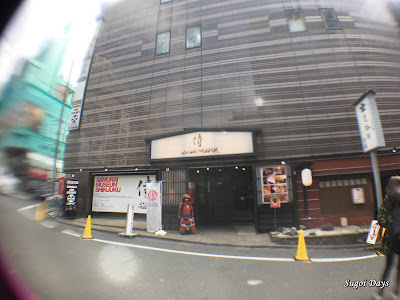 I was in time in fact as an English tour was just about starting and I joined in despite my initial plan to explore the museum myself. What a good decision it was as the guide was very informative, knowledgeable and most importantly, funny. 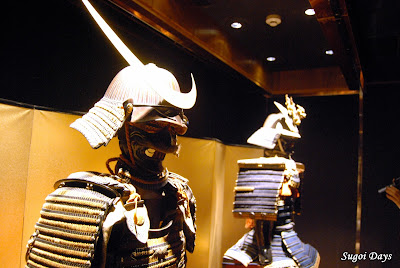 "If harakiri fails, samurais have a friend who would finish the job by slicing off his head. What a good friend." That elected a few laughter from us. 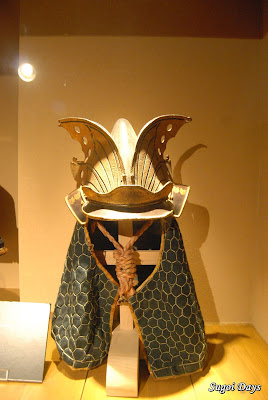 He showed us through the two-storey museum, turned from a private home to a public place to educate visitors much like the samurai collection owned by the museum owner. The tour went from the oldest armoury to the helmet, to the sword to the armour to the guns used by samurais back then. 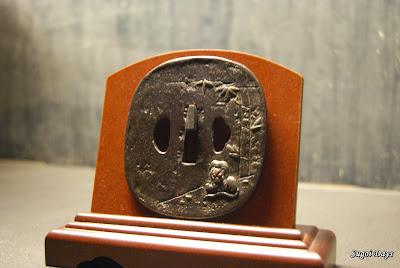 At 2pm, 3pm, 4pm and 5pm, there were even sword battling shows. For those with early entry can come back later to watch these shows as long as they had the ticket to show. Tickets were Y1,800 per adult. 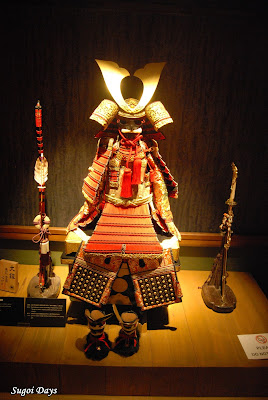 However as I was on a time crunch to go to Odaiba, I headed off  for lunch and by luck came across the famous Godzilla head peeking out from behind Toho Cinemas. 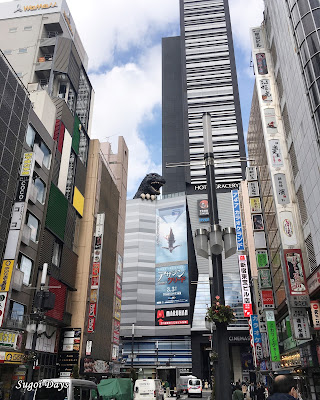 Lunch was at a random vending machine restaurant, Katsuya that had tonkatsu, donburi and a lot of other dishes to try. There were only two rows of seats and being alone, finding a seat was painless and easy for me. Making sure I ordered the right thing from the machine was trickier but when my order came, I dug into my tonkatsu meal with gusto. At only 730yen, I got a satisfying tonkatsu meal with pork miso soup and refillable drink. 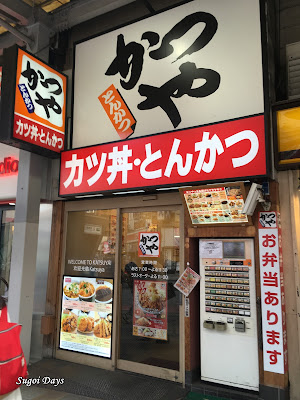 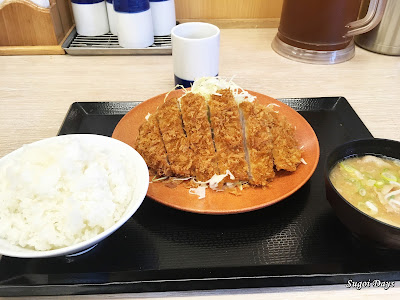 After lunch, I sped off to Odaiba via the Yamanote JR line which merged with the Saikyo JR line. Giving myself much needed leg rest, I found a seat in the train and relaxed for the whole 40 minutes ride. It felt shorter though because in no time, we were at the Big Sight Exhibition Center for the race pack collection for the Tokyo Marathon. 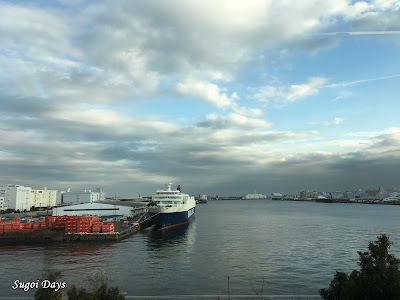 After collecting my race kit, I brisk-walked and speed shopped the whole expo and that alone took two whole hours to finally exit the building. With my funds significantly dwindled and with my race kit bag in one hand and a new pair of shoes in the other, I plotted out the next part of my plan to head to Diver City to see the Gundam statue that was later moved on 5 March. 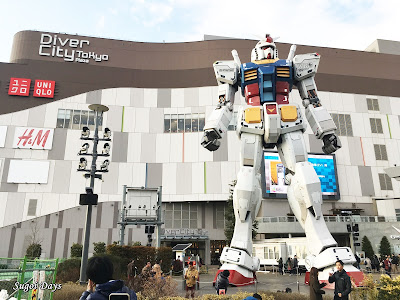 I spent a good hour photographing the statue with the setting sun and even caught the 5pm show where the robot moved its head. From what I understand the next Gundam statue was said to be able to move its limbs and I look forward to seeing it one day. 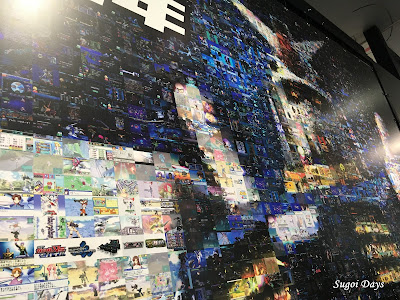 The Gundam Front Tokyo on the 7th floor of Diver City was my next stop. It was sort of like a Gundam museum/exhibition space/workshop - a must visit for all fans of the Gundam series regardless of which series. It offers five different zones for the total Gundam experience with paid admission. Entrance fees are 1,200 yen for adults. 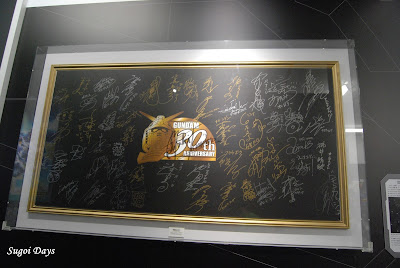 Upon entry, we were ushered into the G-Dome, a dome-shaped theater where we were wowed by a special Gundam short film that spanned across the ceiling for the best effects. It was a quick 15 minutes show and soon enough we were guided into the exhibition room where the 1/1 bust of the Strike Freedom Gundam of the Gundam Seed Destiny series was.

This was the highlight of my visit, being able to stand in the cockpit of my favourite (and admittedly overpowered) Gundam. 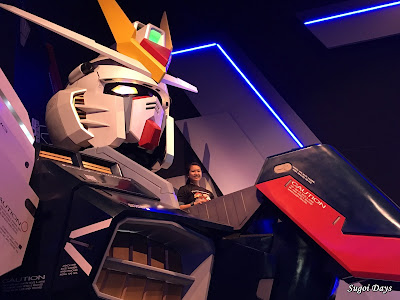 On display to its left is the 1/1 Core Fighter Ver. GFT from Mobile Suit Gundam. The scene of Mobile Suit Gundam’s final battle against the Principality of Zeon on the space fortress A Baoa Qu stands at 15 by 10 feet. It was a fusion of two asteroids into one, forming an umbrella-like shape. There were also interactive photo taking booths where you can dress like a Gundam character and post with your favourite character. The staff are ever present and ever happy to help with the photo-taking. 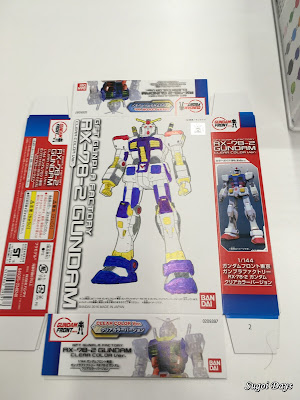 My feet were aching from all the walking I had done and the Gunpla workshop was a good opportunity to sit down and rest my legs. Mind you though, it wasn't so much a workshop but rather a colouring activity as due to the limited time, we were given a basic Gunpla and instructed to DIY the packaging box for the Gunpla. The Gunpla itself was a souvenir to be taken and assembled at home. It was a good half an hour of colouring for me before I felt the urge to shop some more and headed to the Gundam shop where I proceeded to buy a 1/44 Strike Freedom Gunpla to join my Freedom Gunpla, wanted Strike Noir but couldn't find it. 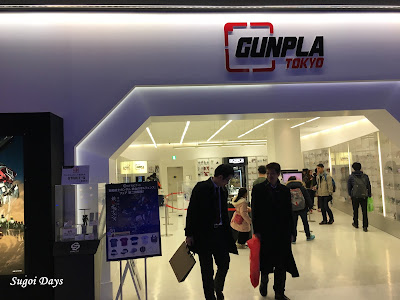 Hardcore fans would love the Gunpla exhibition with 1,000 kinds of Gunpla models on display! After the removal of the statue, the Gundam Front Tokyo was set to close on 5 April for renovations to be re-open at the end of the year in time for the installment of the new Gundam statue.

Let's hope the exhibition will be be bigger, more awesome with more rides for the fans.

Travel Tips:
There are numerous ways to get to Odaiba by train, bus or car. I recommend installing the Tokyo Subway Navigator into your phones and using it to map out the fastest, cheapest or most direct route to Odaiba.