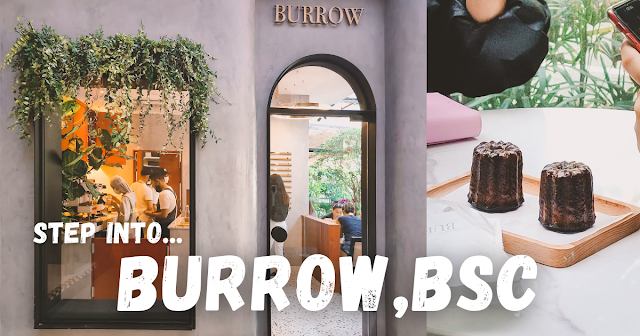 I've never had proper canales until I've tried one at Burrow KL at Bangsar Shopping Centre. I never realised that caneles were supposed to have a crusty exterior nor did I realise they could taste so nice without rum. To my understanding, this pastry is notoriously hard to make as the ingredients have to combined in a specific order, left overnight to set and requires a special mould.

So for Burrow to embark on specialising in this French pastry, is very impressive. What more when their little cafe just opened on the first day of MCO 2.0 but hats off to them for powering through. It's no surprise to see crowds of people flocking there as soon as dine-in was allowed and why not? Their caneles and the stunning interior deserves to be experienced and appreciated.

Upon entering, it does feel like a burrow hidden away from the bustle of the mall with lush greenery hanging from above. A glass ceiling allows natural lighting to spill in, allowing patrons to reminisce of being outdoors without having to endure the Malaysian heat or torrent rains. Limited plug points are available for those looking for a serene ambiance to work out of office or home from (but don't la hog the space)

Seating is limited and so are their caneles which often sells out fast. And I mean fast. When I dropped in, only the Espresso Canele was available and other canales favours had to be pre-ordered in advance. The Espresso canele was pretty good though if you enjoy that slight bitter taste of coffee custard layer to balance out the sweetness of the spongey soft insides. The outer layer was indeed evenly and nicely caramelised for the crunchy bite.

Of course, what is dessert without a nice cup of smooth white coffee. Burrow are no slackers in the coffee area as you often catch a whiff of freshly grinded and brewed coffee within the space. The telltale markings of a great cafe. Burrow also offer other sweet treats such as cakes and desserts, made by single mothers which is an even better to reason to patronise this cafe.

With the emergence of Burrow on to the cafe scene, I can foresee caneles being the more popular pastry at many cafes from here on out. Move aside croissants and hello caneles!