Let me start from the beginning.

When coming to Sapporo in the spring, seeing the flower fields and natural wonders of Furano and Biel comes high in the list of things to do. However unlike Otaru which was easily accessible by train, these two locations were best explored via car and so rent a car we did for this occasion. To drive in Japan by the way, foreigners are required to obtain an international driving permit (IDP). For Malaysians you can find out how here. 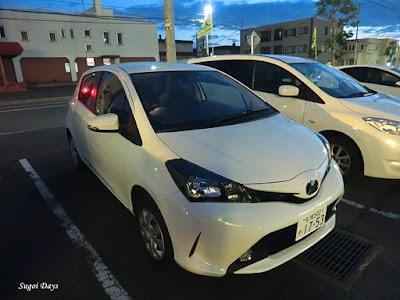 I rented my car, a Toyota Vitz from the Toyota Rent a Car near my hostel, having made the booking online weeks before the trip. For a family of five, it was a bit cramp in the back seats but as we didn't have any luggages with us, it sufficed for the two days adventure outside of Sapporo. On this day, we were headed to Furano and Biel and what a long drive it was into the countryside.

Japanese drivers were by the way the most polite and considerate bunch of drivers I've encountered. No one honked, tail-gated, flashed or flipped anyone on the road. The right lane was indeed only used for overtaking and never did I see a road accident throughout my two days driving there. 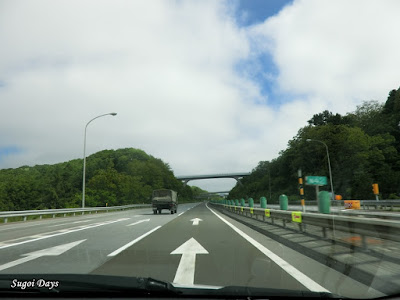 Okay, I didn't get into an accident or anything that dire. I was merely cruising at 70km/h on a countryside road (think one of those two-laned roads in the small towns) and had just overtook a hella slow car when a traffic cop leapt out from the bushes (literally!). Luckily I was already braking at that point. She (yes, a she) was waving a flag so I thought there was some sort of construction up ahead she was warning us about.

Then she ran on to the road (more like threw herself out there) and pulled me over to the side where I saw another female cop was. Oh uh, I immediately knew what I did wrong. My dad in the back seat was freaking out because it helps to panic in that kind of situations (thanks, dad -.-).

The cops were two young ladies, very sweet looking and probably in their early twenties and fresh out of the traffic cop academy. I lowered the window just as the cop approached me and spoke to me in Japanese.

I played the only thump card I had. "Nihongo wo wakarimasen" which meant quite simply, "I don't understand Japanese."

That earned me a look of 'oh crap' from the cop and she quickly asked for my IDP in English. I handed it over and it confirmed that I spoke the truth and was indeed from the country that was infamous for horrid road conditions and its maniacal drivers. I wondered if she has heard about Malaysia.

My IDP was handed back to me and she struggled to tell me that the speed limit was 60km/h. I wished I could tell her my understanding of Japanese went as far as 1 to 100 in numbers.

"Rokuju." she said while draw 60 on her palm with her finger.

I nodded to indicate my understanding, quickly apologised in Japanese and just like that, I was back on the road. The cops were even nice enough to stop traffic to allow me to slip seamlessly back onto the road at a 60km/h, of course.

And that concluded the first time I ever got pulled over for speeding. If it had been in Malaysia, I would have been slapped with a speeding ticket, mainly because I don't bribe.

Our drive continued onto the flower fields of Biel with the now added and increasingly annoying quips from my dad about watching out for more cops on the road and wondering if how old those girls were and them taking their jobs so seriously etc.... I think the incident affected him more than it did me. It got to the point my sister snapped at him to shut it. 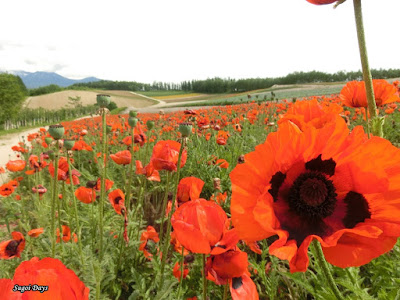 Fortunately, we arrived at our first flower field shortly.