Square Enix's cafe Artnia was at the top of my 'Must visit' list in Tokyo. Having button smashed and trashed my Playstation 2 controllers while playing the Kingdom Heart and Final Fantasy games throughout my high school days, Artnia was the closest thing to Narnia for me (hahaha, see what I did there...) 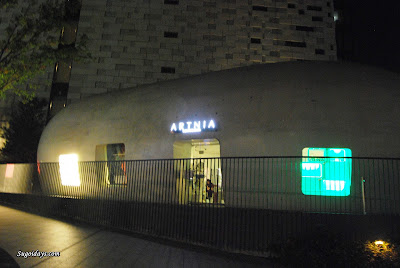 Artnia actually stands for art, area and near, describing the company's intentions to be near their fans through their merchandises. 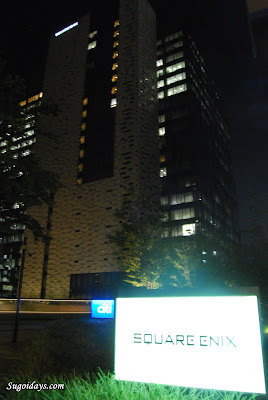 The cafe is located right next to the Square Enix Headquarters in Tokyo and directly behind the Higashi-Shinjuku station. Its unique egg-shape was unmistakable and easily recognisable from the street. Almost immediately visitors can make out the imposing silhouette of Sephiroth of Final Fantasy 7 at the window display before entering the cafe. 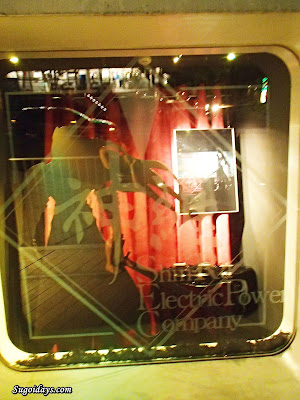 The cafe was divided into three sections. The cafe and bar area where visitors can sit and relax over a cup of coffee or Final Fantasy themed drinks or have western meals, the Fancy area where the Square Enix merchandises like posters, plushies, toys and so on can be purchased and finally, the third area, the Luxury area was where die-hard fans can see and purchase the figurines of iconic Final Fantasy characters such as Cloud Strife and Tifa Lockheart as well as high-end accessories. 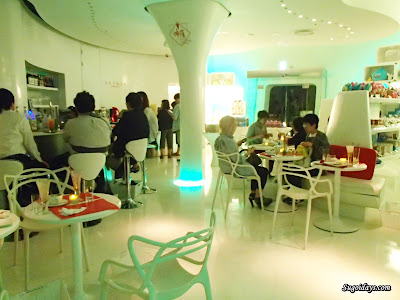 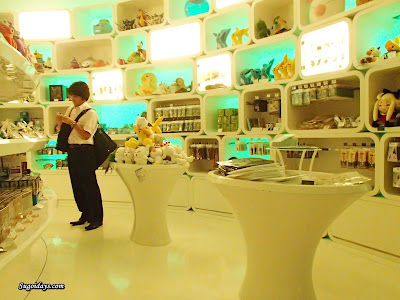 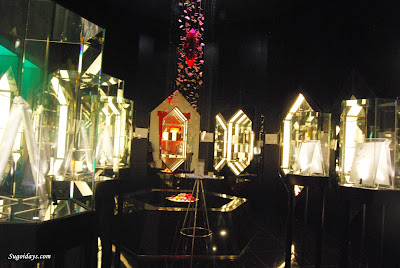 Upon entering, I was torn as to which area to head to first. Luckily my friend suggested we sit down at the cafe first seeing as it was a full house that night. 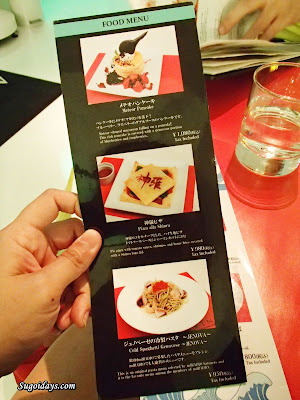 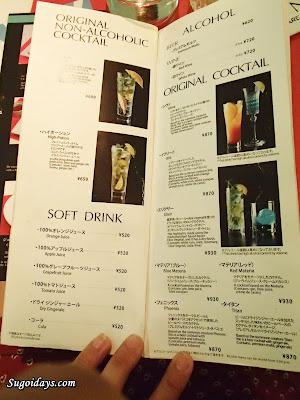 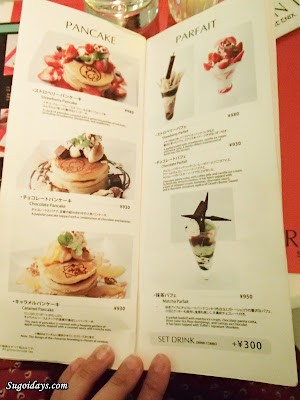 Service was a bit slow due to the crowd but in no time, we had our drink, parfait and pancake on the table. 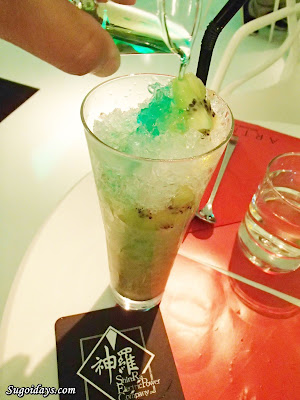 Ever the Final Fantasy 7:Advent Children fan (I confess I never played the game), I ordered the Lifestream drink which was basically a fruity iced drink with green apple and kiwi. Refreshing though a tad bit sweet. 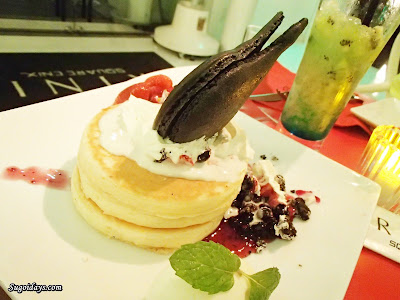 The Meteor Pancake was named and assembled after the catastraophy summoned forth by Sephiroth in the original game and true enough it came with a black macaroon in the shape of a meteor atop a stack of pancakes covered with blueberries and raspberries. 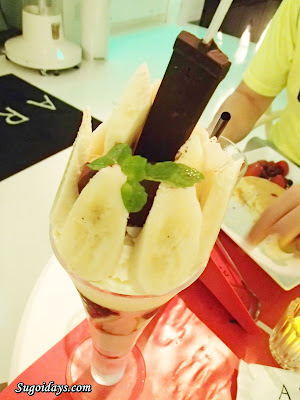 And if that wasn't enough, I also ordered the chocolate parfait. A lot of sites recommended it because it had the chocolate miniature replica of Cloud's Buster. It was mainly chocolate panna cotta topped with coffee jelly, vanilla ice-cream and bananas.

As soon as I was done with the noms, I made a beeline for the merchandises in the Fancy area but a quick look around came up with nothing I wanted in particular. However I did know that there were a few items I wanted from the Luxury section. 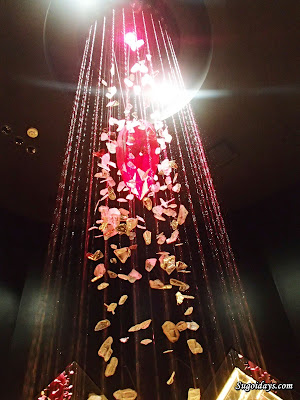 The Luxury area was my favourite with elegant black flooring, walls and ceilings and most stunningly, the waterfall feature at one end of the room. With water falling down from a red crystal, it fell over the pool of materia orbs in a silent yet serene liquid curtain. 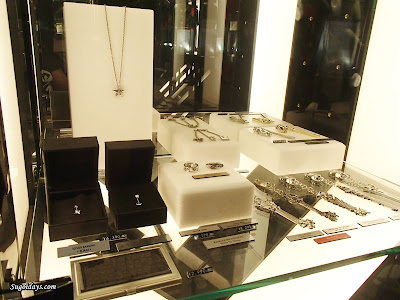 Despite the prices, the collectibles were really popular amongst fans. Quite a few items like the necklaces and earrings were sold out. While I was there, two other visitors walked away with the Advent Children version of Cloud figurine. Naturally with the announcement of the Final Fantasy 7 remake for Playstation 4 with updated tech and visuals, Final Fantasy 7 merchandises will soon be in demand once again. 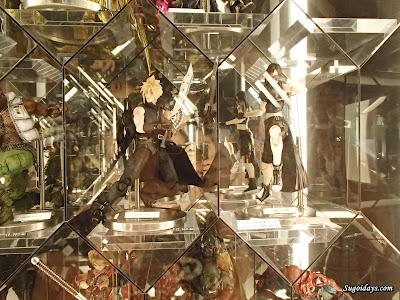 Besides Final Fantasy stuff, there were other well-known characters from the comic-verse such as Batman, Spiderman and Kingdom Hearts. The figurines are pretty high-quality so collectors are getting for what they paid for. I brought a Cloud figurine for myself. There were also lovely hand-drawings of Final Fantasy 7 scenes on display. 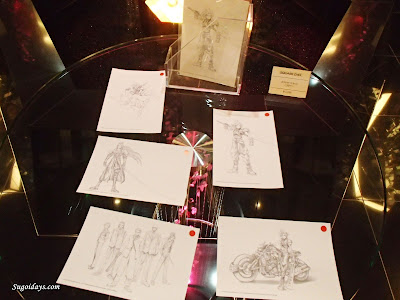 In the background, the music was of the Final Fantasy and was very soothing. They also had a whole shelf corner dedicated to OST albums of Square Enix games. 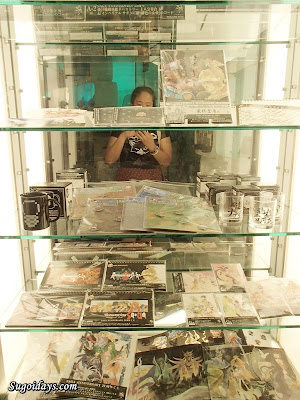 Artnia also sells alcoholic drinks after 5pm. Oh and even if you don't buy a souvenir, a cold drink order will get you a free coaster. You will get to pick either Final Fantasy or Dragon Quest designs. I opted for the Shinra logo coaster. Just remember to bring it back with you when you are about to leave. 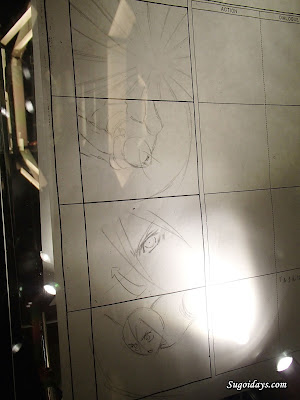 I super duper loved Artnia cafe, especially the Luxury area. It took my friend convincing me that I would run out of cash if I stayed just to get me to leave. If and when I come back to Tokyo again, I'll definitely be dropping by again.