In contrast to the bustling city that was Tokyo, the downtown area of Asakusa held a charm of its own. With the old city mesh with the draw of a tourist attraction that was the Sensoji temple, Asakusa was a really nice place to stay. My accommodation was booked at Khaosan Tokyo Origami hostel, right smack in the backyard of Sensoji temple and from there, exploring Asakusa was great fun.

Sensoji Temple
I had just descended from Mount Fuji that day but despite the weariness in my body, I was excited to explore the downtown. So as soon as I was washed up, I headed out to wander about Sensoji temple once the sun has gone down and it was gorgeous. 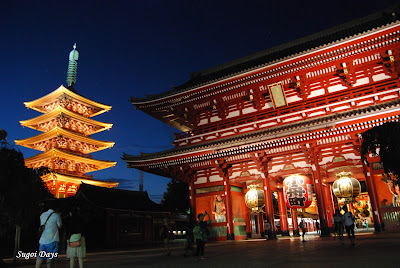 It was a great difference from the crowded afternoon ambiance and the structures were beautifully lilted with the night illumination. If anything, the temple seemed to come alive in the evenings, making the entire place more mysterious. The Sensoji temple was completed in 645, making it Tokyo's oldest temple. 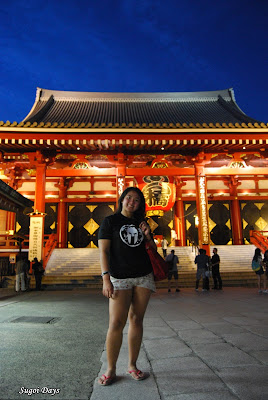 Leading up to the temple was a 200 meters long shopping street, Nakamise which was quite literally a visitor's heaven for souvenirs and traditional Japanese snacks during the day. At night, when the shutters are down, the street becomes a photographer's dream with unique designs and murals on the shop shutters. 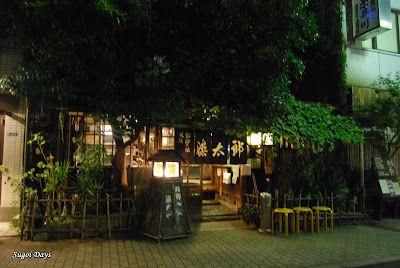 Sometaro stood out against the modern buildings along that street with its traditional structure covered by trees. Upon entering, it was mandatory to place my shoes in plastic bags provided. Because there was no air-conditioner, plastic fans were given as I was shown to the kneeling table with a hot grill in the middle for the okonomiyaki. 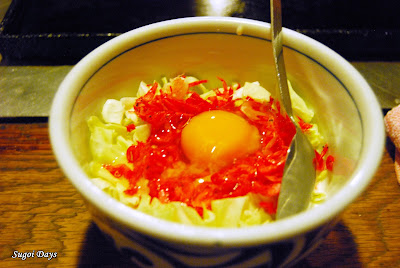 Okonomiyaki was an Osaka specialty and this place pretty much nailed it. With fillings such as shrimps, chicken, pork and vegetables, the prices are rather worth the meal despite it becoming hot and smoky as the evening continued. I could opt to cook the okonomiyaki myelves or have a staff assist me. Because I was famished, I decided to just let the staff prepare my meals, less I ended up burning it. 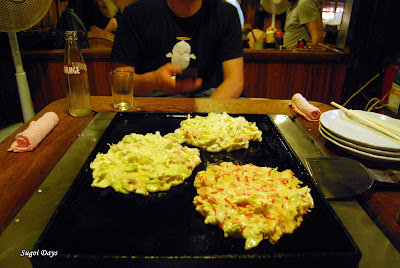 The filling was ample, the pancake crunchy and juicy inside and out. BBQ sauce and mayo was readily available on the table for diners to brush over the pancake. It was the ideal meal after an exhausting day.

The only downside was that the place was freaking hot.

Don Quixote 24 Hours
This place was awesome possum. About 5 floors of every Japanese invention and everyday stuff under one roof. It was heaven and a 24 hours heaven at that. 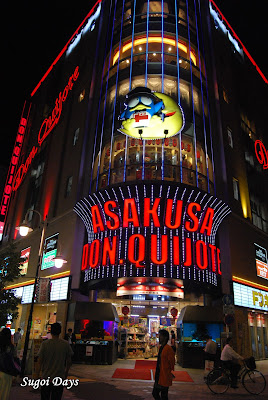 There was bicycle parts, eyeliners, games, cosplay costumes and even a small adult section for the curious boys. The ground floor or first floor in Japanese terms was the supermarket section where I found that Poppin Cookin Sushi set for a super cheap price. 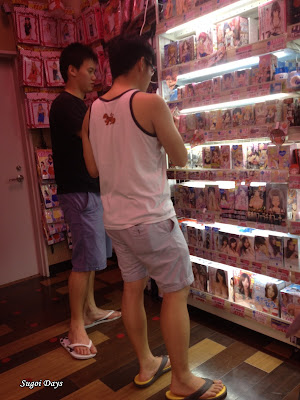 And the best part was...this Don Quixote in Asakusa was opened for 24 hours which meant I could do last minute shopping at 3am in the morning for souvenirs or for food. \

More exploration of Asakusa to come!