After a scrumptious lunch at Daikokuya Tempura restaurant lunch in Asakusa near the Sensoji temple, we boarded the train along the Asakusa line to the Tokyo Imperial Palace. At this point, DOMS (delayed onset muscle soreness) from Mount Fuji has set in and I was walking and climbing up and down stairs funny. Why I decided to join the free Imperial Palace walking tour a day after descending a mountain is beyond me. 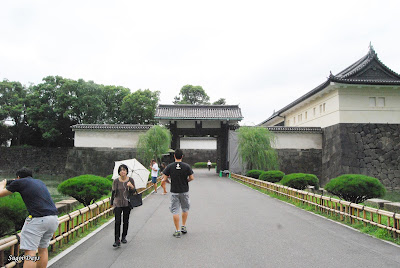 Oh and in case you didn't catch that, the Tokyo Imperial Palace walking tour was free of charge. All you need to do is book your slot on the official website three months in advance, print out the confirmation slip and arrive at least 30 minutes before the indicated time at the Kikyo-mon Gate. Why 30 minutes? 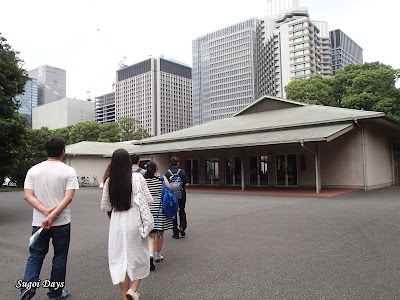 Because the Tokyo Imperial Palace's visitor's house (and basically where the tour starts from) has a hidden souvenir shop inside. RocketNews24 reported it sometime ago and I was eager to check it out. To really have a good look at things, I allocated half an hour before the tour to visit the shop. It was a good thing I did because the shop closed up as soon as the introduction and briefing session started. It won't re-open after the tour so it was best to get your shopping done before the tour. There are lockers available to store your purchases and bags if you don't want to lug about your new bottle of sake. 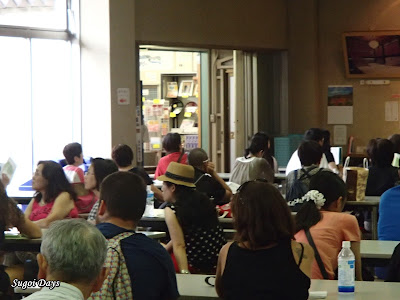 The store was called Kunaicho Seikatsu Kyodokumiai aka Imperial Household Agency Cooperative. It sells souvenir cakes, sake, biscuits and several items embedded with the imperial seal (16 petal Chrysanthemum). You can only get these items there and no where else, even online. After 15 minutes of browsing, I walked away with a seal-embedded bottle of Gyoen Nihonshu (Japanese liquor) and several trinkets as souvenirs. 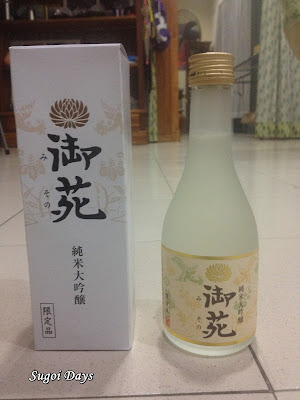 As the tour was only conducted in Japanese, English-speakers can borrow the audio guide mp3 player at the visitor's house and soon we were on our way. We just had to pay attention to the guide's indication of which numbers to press to get the right audio recording playing at the right attraction. 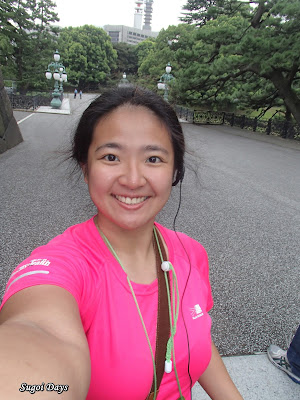 Compared to the Kyoto Imperial Palace, Tokyo Palace offered a more modern twist to a royal household with big grey buildings and halls spaced out around the palace grounds. There were a few historical architecture in certain sections - leftovers of the original castle but it lacked the richness of culture and historical ambiance found at Kyoto. 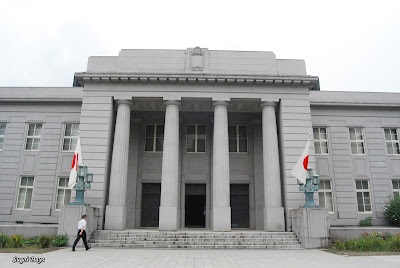 The surrounding greenery was well-maintained and made for a nice walk. However we were warned that there were a few gentle slopes along the routine. Usually not an issue for the young and healthy but if one was old or suffering from DOMS, then it's a different story. 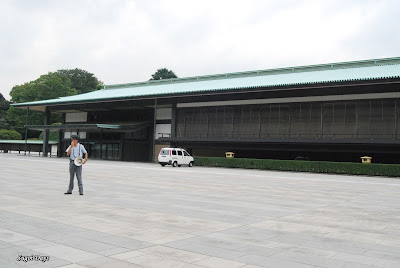 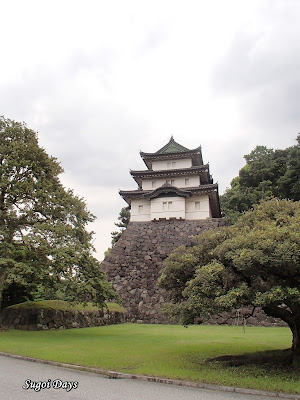 The tour took about an hour and we were led back to the visitor house where the audio guide was returned. Those who wanted to see the east gardens of the imperial palace are shown out a different exit and also given a tab which we had to return upon exiting. The east gardens are open to the public even though outside the tour but closes only on Friday's.

The east garden was rather boring with lines of tall study trees around and a few unrecognised able flowers as well surrounding two large fields. However I heard it was lovely in autumn just as the leaves turn brown. 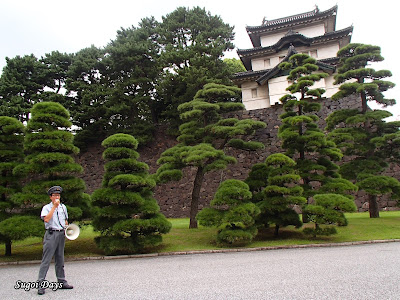 We stopped by our hostel in Asakusa to freshen up before heading back out for dinner in Shibuya. Of course as soon as we got there, it was only the natural (touristy) thing to do to locate the famous Hachiko statue and snap a picture with it. I was fortunate that there wasn't much of a crowd then because it was drizzling lightly. 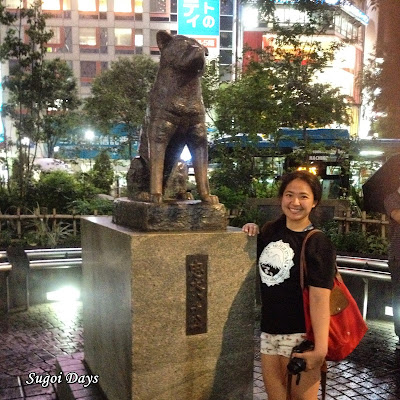 My friend consulted Lord Google and found some random underground Ramen restaurant called Ichiran, just off the streets of Shibuya. 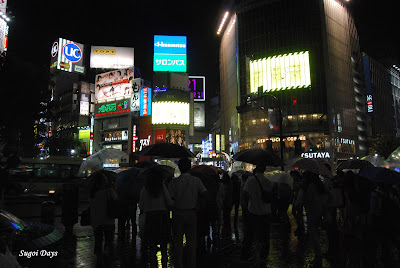 (Okay la. Ichiran is actually a famous ramen restaurant in Tokyo and number 4 on Tripadvisor's Restaurants in Shibuya.) 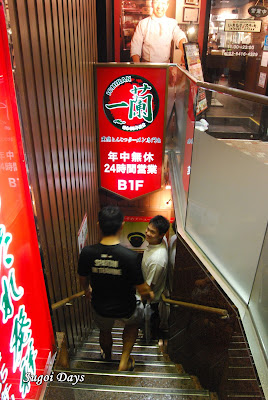 Looks can be deceiving as from the outside, you might miss the narrow stairway leading downwards but once you are inside, odds are you'll be part of a queue doing into the restaurant. There are two vending machines with pictures where you can order your food from while waiting. The machine will dispense your order chits and the waiter will give you a form to fill in to specify your meal preference like your noodle texture, garlic toppings, spiciness and if you want extra noodles or soup. 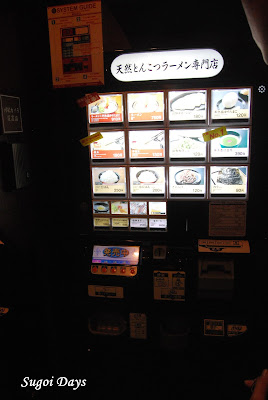 Then comes the waiting. We waited for about half an hour before we were shown to our seats. We were given our own bar-like seating arrangements with partitions and a curtain between us and the kitchen to give us some privacy. My ramen was served promptly and it was glorious. The broth was pipping hot and rich in flavour. The meat was succulent with fatty edges that gave it a buttery bite that goes well with the al dante noodles. 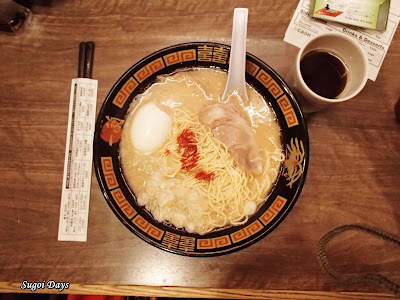 I also ordered their dessert, green tea soft tofu pudding. I highly recommend this as it was delicious with a soft silky texture and an underlining sweetness to it. 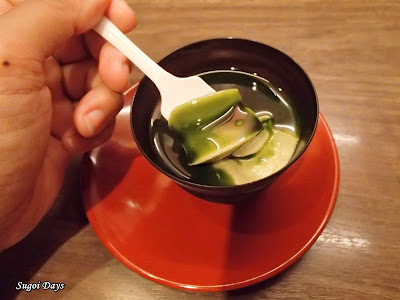 After a hearty dinner like that, we wanted to walk through Shibuya but found a lot of the shops closed at 9pm. So while my friends opted to stay on to explore the streets and bars, I headed back to Asakusa. I just loved how safe Japan was that I could go exploring by myself at 10pm. 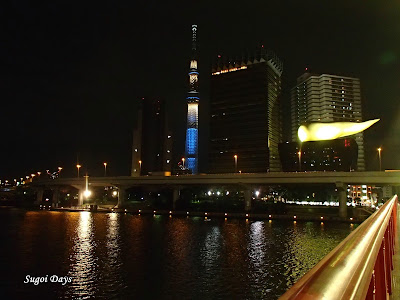 As I mentioned in an earlier post, Asakusa was lovely to explore at night and that night, I caught a glimpse of the Tokyo Skytree tower lighted up in blue and the Asahi Beer Headquarter's iconic sperm 'Asahi Flame' in gold. The Sumida river was quite serene at that hour and I spent a while there just snapping pictures.