"Welcome home, My Princess and My Master!" was the greeting my friends and I received from the cheerful maids of @home maid cafe. This was the start of my first maid cafe experience or as the Japanese would say...Meido kafe or meido kissa.

It was quite literally an otaku's day out as we had a full day ahead of us with a guided tour in Akihabara scheduled in the afternoon and a trip to Artnia, the official Square Enix cafe. We started the morning sipping on a cup of coffee while watching the Shibuya crossing from the iconic Starbucks Shibuya. 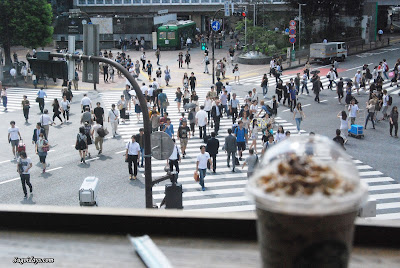 Getting a window seat at this Starbucks was hard but we got one nonetheless and it was pretty peaceful. The only downside of going so early was that the crowd crossing wasn't that spectacular. On the plus side, Japan has super cute public buses. 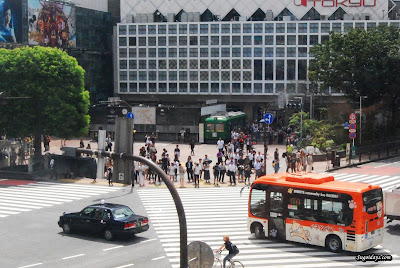 From Shibuya, we decided to walk to Ometosando. Despite being categorised as a part of Shibuya, it was still a 1.5km walk from the Shibuya crossing. But thankfully the weather was sunny and cooling and we took advantage of it to enjoy the city scenery. 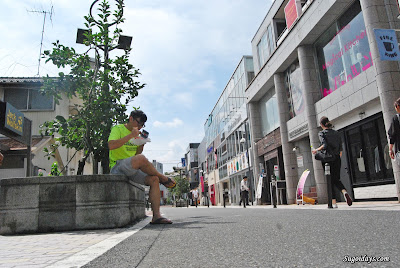 Everything in Japan in general was a architectural masterpiece! We were strolling along this simple narrow alleyway behind the main roads called Ura-Harajuku aka Cat Street. We even found an Takoyaki store and a vending machine side-by-side with a hedge of summer flowers. Perfect for some roadside photo shooting. 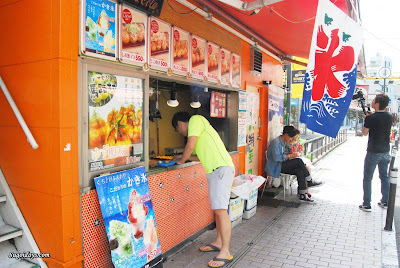 We emerged along the Ometasando road and I was immediately reminded of Bukit Bintang and Pavilion. The Tokyo's Champs-Elysees, it was very high-end with flagship stores of fashion brands like Louis Vuitton, Prada, Dior and further down the road are Zara, H and M and Nike and Puma. However I was here for the most unlikely store, Kiddyland. 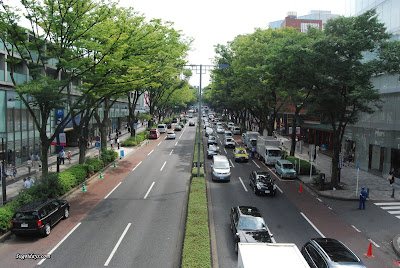 As implied by its name, Kiddyland was a store for kids of all ages and that included those in their 20s and deep pockets to afford all these childhood toys. There are six floors, each dedicated to a certain cartoon range. Their toys and merchandises come from popular cartoons from Japan (of course) like Pokemon, Sailormoon and Hello Kitty and also from foreign countries such as Star Wars, Peanuts, Disney and even Marvel and DC. 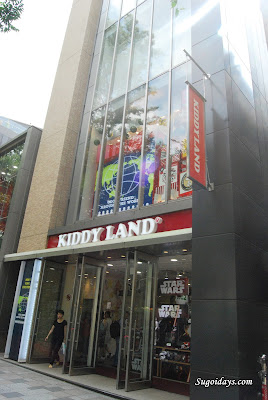 I spent a good two hours at Kiddyland hunting down NanoBlocks, Gudetama merchandises and Pokemon figurines and socks for my blog giveaway. 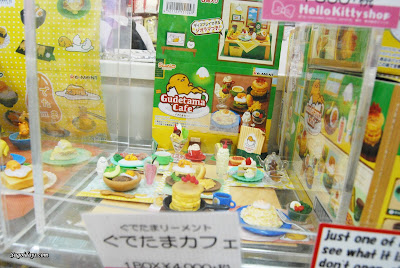 Harajuku was our next destination but before that, we chanced about the lovely JR Harajuku train station that looked like a Western home rather than a train station. 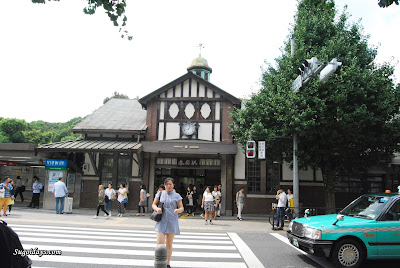 Famous anime scenes can be seen plastered on the billboards along the railway tracks. There were two entrances to this station and we found the second underground entrance 50 meters away and right in front of the entrance to the colourful Takeshita lane. 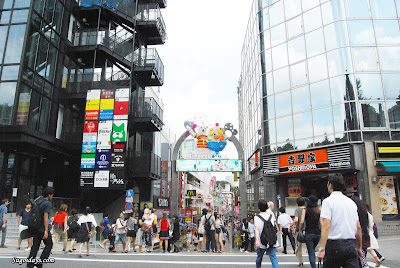 Takeshita reminded me of Bangkok with its flashy, out-of-this-world outfits, local visitors and international tourists. There were Cold Stone ice-cream, cotton candy, crepes, clothes, accessories and even a multi-storey Daiso. It was again...very colourful and super crowded. 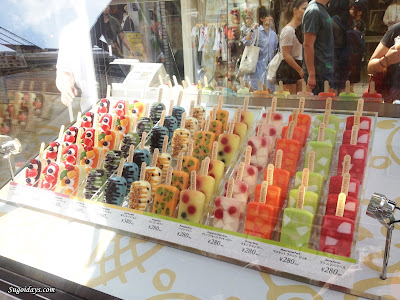 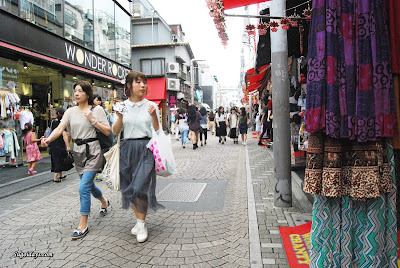 From the Harajuku station end, we walked all the way to the other end and stumbled across the ever....COLOURFUL Harajuku Tourist Center! The clock made of toys was super cool and definitely worth a visit. 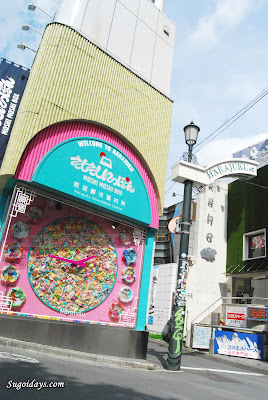 But because we needed to be in Akihabara in a hour, we hightailed it out of Harajuku and boarded the JR train for a 30 minutes train ride to Akihabara for our guided tour. During the ride, it started to pour and we were worried it would affect our tour. We had booked our Akihabara tour with a maid guide through Go Voyagin site months in advance (link here) as we read that Akihabara was best explored in the hands of a local. There were so many hidden jems in this area that ideally, we should stay a week here to unearth all its secrets that does not include the famous AKB48 cafe and shop nearby. 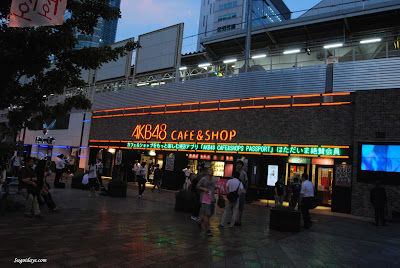 Fortunately when we got there, the rain had subsided into a drizzle and we spotted our guide, Cocco easily. She and another guide both stood out against the busy crowd of Akihabara station near the famous Gundam cafe in their adorable maid outfits. 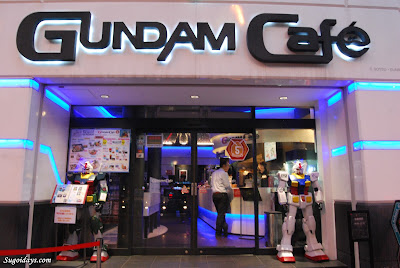 It turned out that two tours were taking place at a time, one for us in English and conducted by Cocco and the other for a Mandarin-speaking tourist. They also cater to France, Italian and Spanish speaking guests as well. As for our guide, Cocco spoke perfect English and was super friendly and accommodating. She and I ended up chatting about Final Fantasy stuff and cosplay and I told her about Artnia cafe, a place that even she hasn't been too. 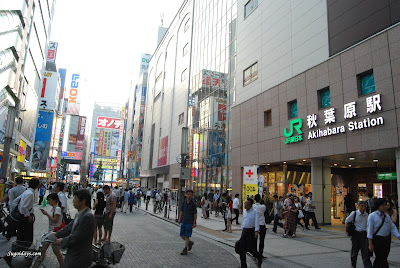 To escape the drizzle, Cocco led us to a nearby multi-storey complex where we were treated to the craze of doll collections. It was a real eye-opener to see adults purchasing parts and pieces and articles for their dolls as they would themselves. There were even studio backgrounds for them to do a photo shoot with the dolls on that floor. 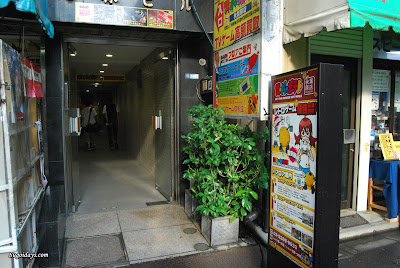 Cocco then shows us around the alleys of Akihabara where shaded stalls gave way to an underworld market of radio parts and gadgets. It was technie's dream as they can get any electronic they so desired from here. But this wasn't Cocco's main objective of bringing us there. She took us to a barely noticeable building with a hidden stairway from the street and up we went to the many floors that opened up in a hidden gaming library. 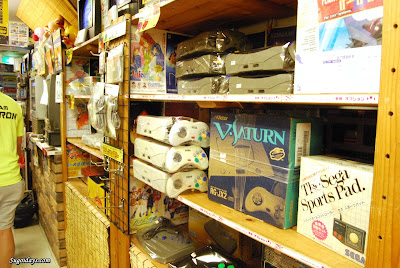 It was here that I was thrown back into my youth as a wannabe gamer. At about RM100, I could purchase the original Gameboy or a few cartridges and at RM1000, go home with a mint condition Playstation 2. There were shelves and shelves of old games and consoles that dated back even before I was born. 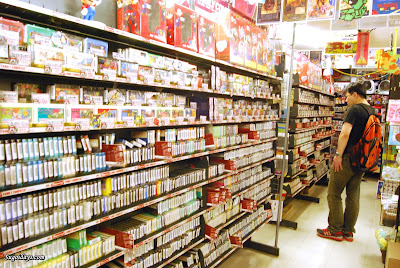 Cocco also showed us to a few otaku stores that were a must visit in Akihabara especially if you love collecting the merchandises or cosplaying. These were the places I won't have known about if it wasn't for Cocco. But the real highlight of the tour was the visit to the ever famous maid cafe, @home. True to its name, we were immediately greeted as Master and Princess by a horde of cheery maids as soon as we entered the establishment aka our home. 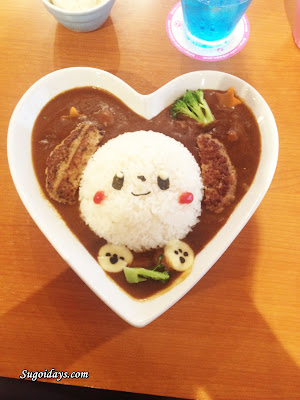 As no photo-taking was allowed of the maids and the interior, we knew little of the cafe's appearances but we could take pictures of the food. We ordered the complete set meal which also included a Polaroid photo with a maid of your choice. 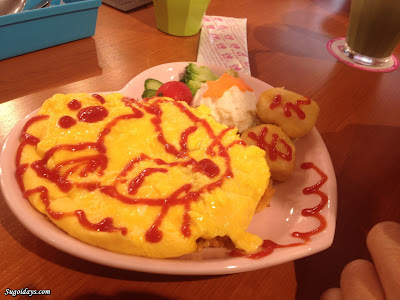 Food was decent but the real attraction was when the maid would draw something on your food with ketchup or do coffee art on your drink upon your request. And then before you eat, you need to perform a Moe Moe spell with the maid to make your meal more delicious. 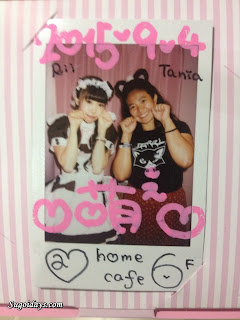 Through the entire experience, we conversed with the maid and Cocco helped translate any additional request. We then took turns taking pictures with a maid of our choice. I was told that my Japanese pronunciation for a foreigner was on point by the maid servicing us and I left the cafe beaming with pride much to the annoyance of my friends. Cocco had also said earlier that my Japanese was quite good too. *beams beams* 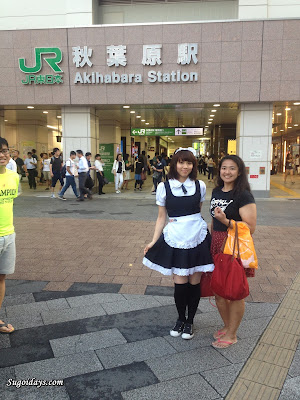 Our tour ended in the evening right back at where we started. We took pictures and bid our farewells before we went our separate ways. Thanks to Cocco, I sort of knew my way around Akihabara when I came back the next day to revisit the places she took us to and it seemed even better the second time.

If you are new to Tokyo and have Akihabara on your list, then consider booking a guide tour slot with Go Voyagin Akihabara Tour for an adventure into the underbelly of this bustling part of town.

Our final visit of the day was to Artnia cafe which I dedicated a separate blog post to (review here).