Well, I have done it. I managed to completed not one but two Spartan Trifecta this year. Once a distant dream, it was made possible with a lot of planning and the willingness to make small sacrifices like buying less clothes and going out less. So much less...I have no social life now outside of my bootcamp and work groups.
It seemed right that my first Trifecta for 2016 had come from Malaysia and very appropriate that my second came from Australia, the land where my Spartan journey started. The journey to these Trifectas has been nothing short of memorable.


It started with the Kl Super and the Hurricane Heat in the morning. Upon realising that my body could take a lot more than I anticipated, I signed up for both Kl Sprint and Beast over one weekend. I could have counted my Singapore Sprint as part of the Trifecta but no, I wanted to do it the Spartan global way. No exemptions. No whining.
I pushed myself hard on the KL Beast and found myself achieving things I never thought possible. My timing was my best so far for a Beast and I felt good.
BUT that's the thing about Spartan Races. Each race was different and the Trifecta Weekend in Bright soon proved that I still had long way to go fitness wise. The hill that proceeded to break me and many other racers was dubbed the highest elevation in any Australian Spartan course.
After three teammates dropped out of the event due to personal reasons, I knew the only one who was going to pull me through this was me.  The 17+km Super kicked off the weekend for me and I was introduced to Mystic 'Spartan Killer' hill - a 1.5km hike up (Super U-turn point). 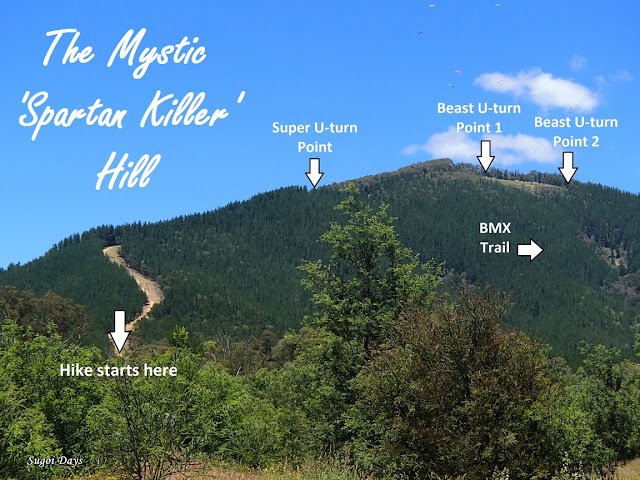 Everyone I spoke to cursed that hill and I agreed. It made the hills in the KL Beast look like speed bumps. That hill took so much out of me that I ended up getting lost after it.
The 8+km Sprint was kinder with a flatter terrain and fewer obstacles along the way. Still I took my time then to save my legs for the following day. Something told me the race organisers had a jovial time cooking up a killer course for the Beast and I was right.
The Beast was by far the hardest course I've encountered. Racers had to hike all 2km up Mystic Hill to the paragliding platform where an obstacle (wall balls) await. The obstacle was no easy feat for many ladies and it was a penalty of 30 burpees for me.
On the bright side, I got to do my burpees with a stunning view of the Bright (Beast U-turn point 1). Well worth the hike? I would say yes now but not during the entire 2km climb and descent.
To my horror, I had to climb the hill twice - this time via a different route via the BMX track with plenty of switchbacks through a scenic stretch of alpine trees. The zig-zag was the kind part because after that the steep incline of trail route proceeded to break me for the next hour or so.
Never mind the obstacles along the way, the trail was the real challenge for the Beast. I was closed to just calling it quits but instead decided to set small goals. I focused on reaching that rock, that tree and before I knew it, I was at the top of Mystic Hill again (Beast U-turn point 2). This time, I sat down at the top of the hill to just bask in the beauty of Bright before us.
It took me close to 8 hours to complete the 25+km course with me opting to saving energy for the dreaded Fortress. With coaching and moral support from my sister, I finally succeeded in overcoming the obstacle, having failed four times previously. It felt great to finally flop on the cargo net at the top and it took a while for my muscles to stop shaking long enough to climb down.
The Bright Trifecta Weekend was an ambitious idea by the Australian Spartan team and they pulled it off splendidly. Everything was well organised from the race pack collection with clear instructions, the baggage drop, the merchandise tent to the start line. Food and beverages were right up my alley with plenty of action to go around as spectators could watch the racers tackle several of the obstacles built around the race village before leading back out into nature and that hill again. 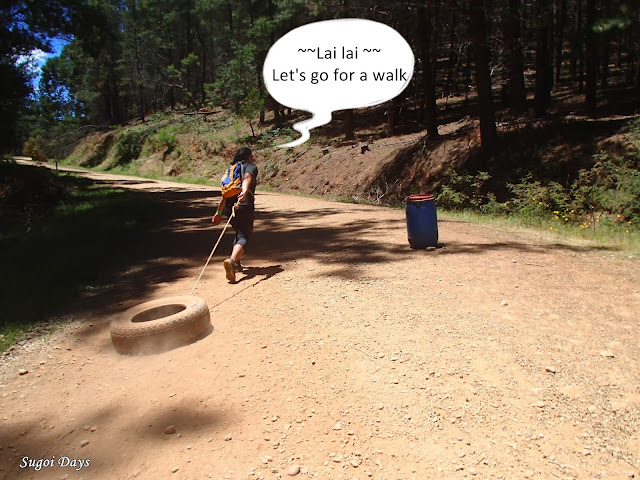 Obstacles varied in challenge and at times were clustered almost one after another to kill us.
And the course...was perhaps the most scenic I've experienced and yet so gruelling at the same time. My time and performance for the Beast in Bright was a far cry from my Putrajaya Beast but then again, that was exactly what the Spartan Race was all about. I may excel at the local races but the Australian versions would promptly kick my ass and school me and I don't mind it.
To Malaysian Spartans, I highly recommend giving the Australian races a go. You'll be faced with much more challenging obstacles, unpredictable temperatures and rolling terrains in the middle of nowhere and a greater sense of achievement with each medal obtained.

I shall now leave you with this image of my dear friend Chee Ching during the race.
Thank you for reading! Leave your thoughts in the comments below!