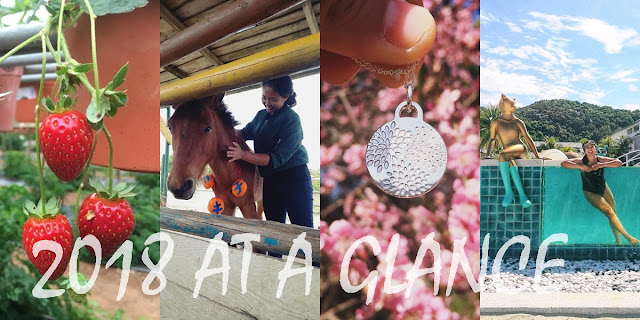 As we bid farewell to what was a turbulent year, we welcome a new year once again. In 2018, I travelled. Boy, did I travel. My bank account is at an all time zero as proof of that. But as stressful as it is having literally no money on a day to day basis, I realised I regret nothing about my adventures.


The two months I spent in Japan were the best times of my life. I often reminisce about the people I met there, the work I did on those farms and how those two months in a foreign country alone has made me more assure of my own independence and capability to take care of myself. I also ran my third marathon in Nagoya and achieved a personal best. I missed Japan so much that I even applied to be an ALT (Assistant Language Teacher) only to discover that I needed 12 straight years of education in English. Sometimes coming from a bilingual education system has its drawbacks.

I travelled to Sydney for my bestfriend's wedding and was part of the bridal party. I spent the months and what little money I had left on make up and clothes just so I didn't look like a ghost in the official photos. Then while there, I witnessed the bratty annoying kid I knew since we were kids become a man(child). Good luck to the waifu.

I travelled to Turkey for the first time and rode a hot air balloon for the first time. It was...strangely underwhelming actually. But what was overwhelming was the amount of Instagrammable spots in that country. If I ever get to writing about it, I will share it on the blog. Joining a tour group was a great introduction to the country (even though I had to resist the urge to throw knives at a few tour members) but should I return, it would be a DIY trip to Cappadocia and Pamukkale to spend more time in those towns.

I visited my own country's highlands and islands in the form of Cameron Highlands, Langkawi and Penang and upon venturing out on my own, learnt to see the beautiful landscapes and historical treasures as an outsider would. With the added advantage of being a local.

1. A new part of Japan unlocked - it's my mission to travel through every part of the motherland Japan and in 2019, I will be visiting Fukuoka thanks to the newly launched route by AirAsia X. Hopefully with some planning, I can unlock more than just Fukuoka.

2. Mount Fuji Marathon perhaps? - so continues an everlasting vow to only run marathons in Japan. This particular event is held in November, my favourite season of the year and the route goes around Lake Kawaguchiko and Lake Saiko which are both stunning.

3. A new career path - I left my PR job at the end of 2017 to be a nomad and just travel. Jobs I've applied for just fell through over the few follwing months and perhaps now those were actually a blessing in disguise.  Because if all works out, I might be chartering course into an entirely whole new field of work. But until it's signed and done, I shall not jinx myself.

If you've actually read all of that to this point...wow. Like why?

Ps: oh oh oh, I am super stroke for 2019 because DC's Young Justice series will finally be returning! My girly gurl crush on Nightwing has been revived. Power to the fans!
Posted by Tania at 11:43 PM